Plans for more troops in Europe remain on track, for now 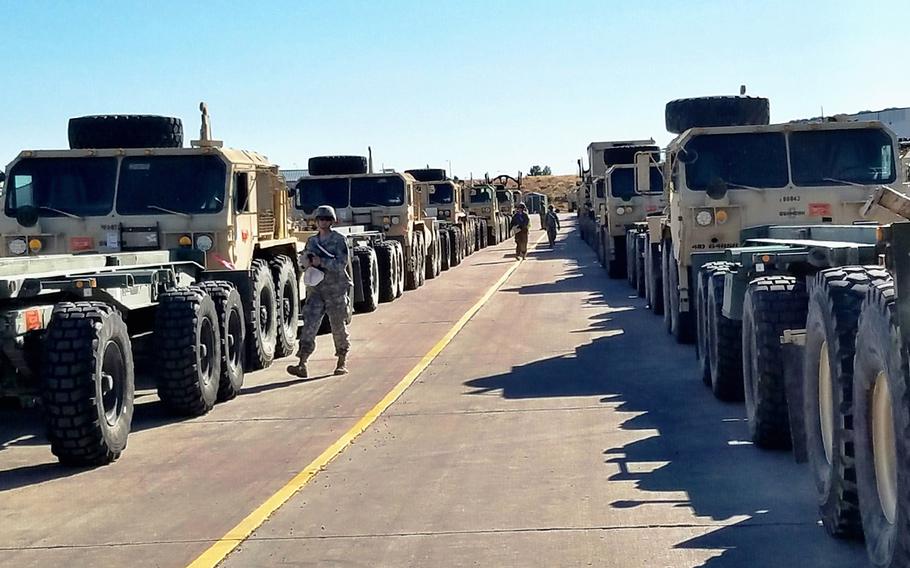 Soldiers from Fort Carson, Colo., stage tactical vehicles for loading on to trains on Nov. 7, 2016, as the vehicles are prepped to be transported to Bremerhaven, Germany. (Ange Desinor/U.S. Army)

The Pentagon is moving ahead with plans to deploy more troops, attack helicopters and artillery to Europe early next year as part of a multibillion-dollar effort to reinforce NATO’s defenses along Russia’s periphery, the military said on Thursday.

A Fort Carson-based armored brigade is set to rotate to Europe in January as part of an effort to ensure a year-round presence of tanks and additional troops on the Continent. The deployment, part of the $3.4 billion European Reassurance Initiative, calls for series of other moves aimed at improving the military’s ability to respond to a crisis in Europe.

Yet questions have begun to swirl with the election of Donald J. Trump as president about whether the United States will remain committed to the plan. The Pentagon played down those concerns Thursday.

The military is “executing the plans as they were constructed with our NATO allies in close consultations with NATO, so we’re proceeding forward and we’ll leave it to the next administration to speak to their policy choices,” Pentagon spokesman Peter Cook told reporters.

Cook declined to speculate about whether the Trump administration would remain committed to reinforcing the military’s presence in Europe, which before Russia’s 2014 intervention in Ukraine had been on steady decline.

“I’ll leave it to the president-elect and his team to speak to that,” Cook said.

During his campaign, Trump sent mixed signals about how the U.S. military should be organized overseas and about America’s commitment to the NATO alliance.

He made waves earlier this year when he suggested that the U.S. might not be willing follow through on defending allies if they came under attack, saying that U.S. solidarity was contingent on partners’ spending more on their own defense. The comments rattled NATO members, particularly those once dominated by the Soviet Union.

At other times, Trump has said that the U.S. remains committed to NATO but that the alliance needs to adapt to new threats.

The future design of U.S. forces in Europe, as well as the longevity of efforts to circulate more rotational forces around Europe, could depend on how the U.S. relationship with Russia develops under Trump.

Moscow has lashed out at NATO’s efforts to increase its presence in places such as the Baltic states and Poland, which view Russia as a threat to their security. Trump has said he hopes to improve relations with Russian President Vladimir Putin and that he wants closer cooperation with Moscow in Syria and elsewhere.

Trump has been less specific about how the U.S. military’s role in Europe could factor into talks with the Russian leader.