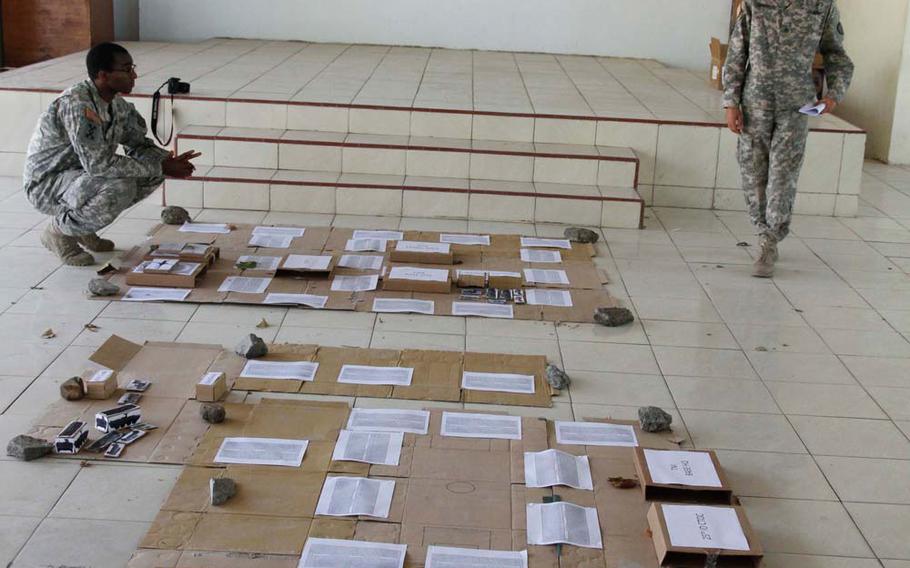 Staff Sgt. Joshua Griffith, right, explains the elaborate model he made to inform unit leaders where, when and how vehicles and containers will be moved from Garuda Shield sites to an Indonesia port for shipment to Japan. (Wyatt Olson/Stars and Stripes)

Staff Sgt. Joshua Griffith, right, explains the elaborate model he made to inform unit leaders where, when and how vehicles and containers will be moved from Garuda Shield sites to an Indonesia port for shipment to Japan. (Wyatt Olson/Stars and Stripes) 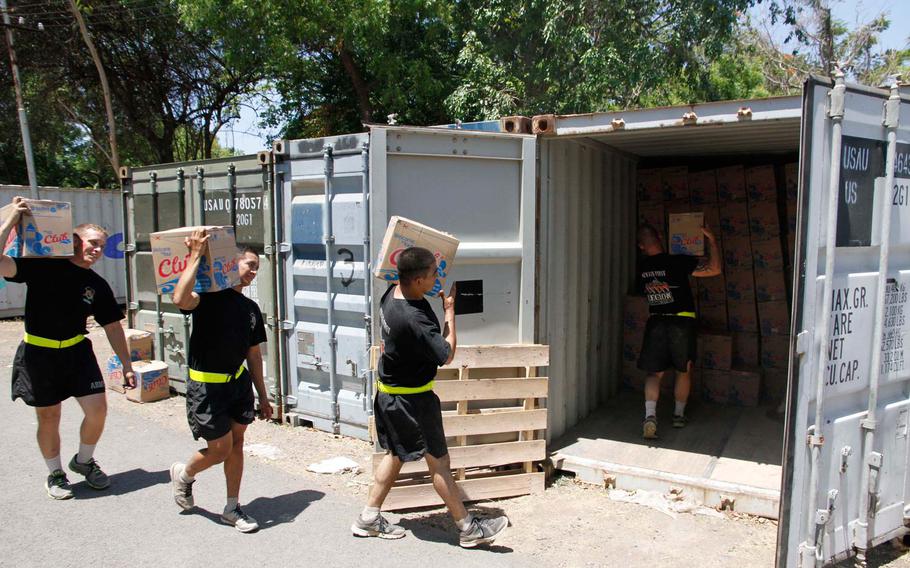 Soldiers hoist roughly 3,500 cases of drinking water from the mess hall to containers for the move to Japan. The water had been offered to the Indonesia army, which declined it because the bottles were considered too large for its needs. (Wyatt Olson/Stars and Stripes) 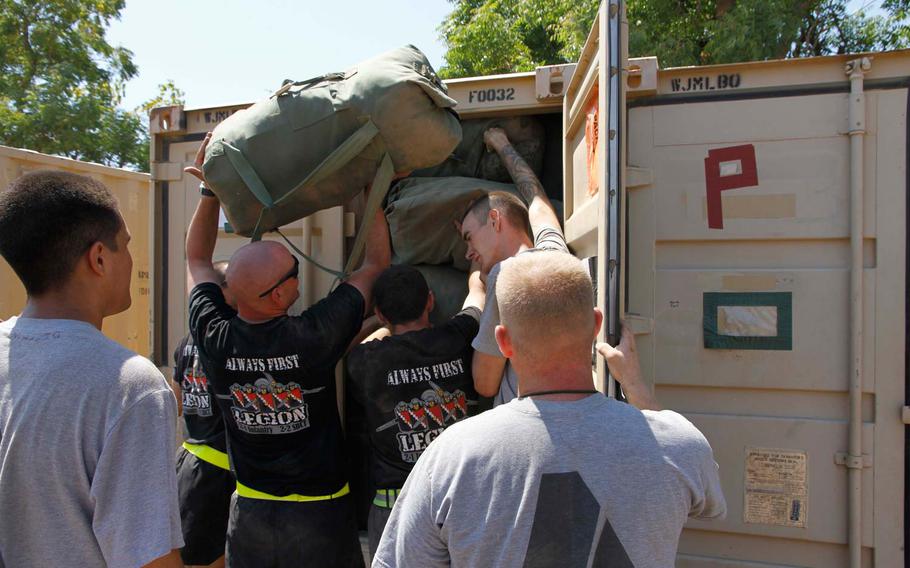 Solders employ every football block they know to get yet one more ruck into a container bound for Japan after the completion of Garuda Shield in Indonesia, on Oct. 2, 2014. (Wyatt Olson/Stars and Stripes) 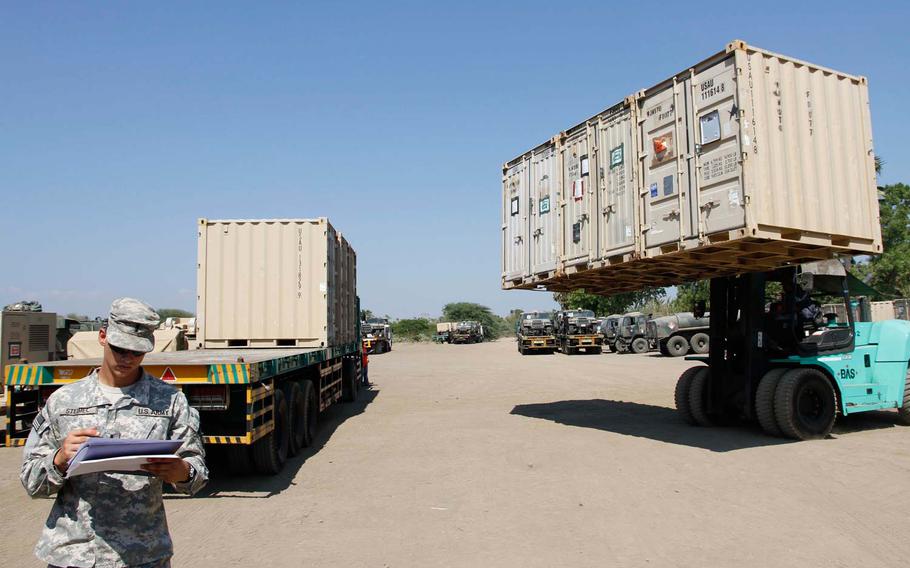 An Indonesian contractor uses a forklift to load one of dozens of containers used to move U.S. Army supplies for Pacific Pathways, everything from barbells and spare Stryker parts to mess hall mixing bowls and socket sets. (Wyatt Olson/Stars and Stripes) 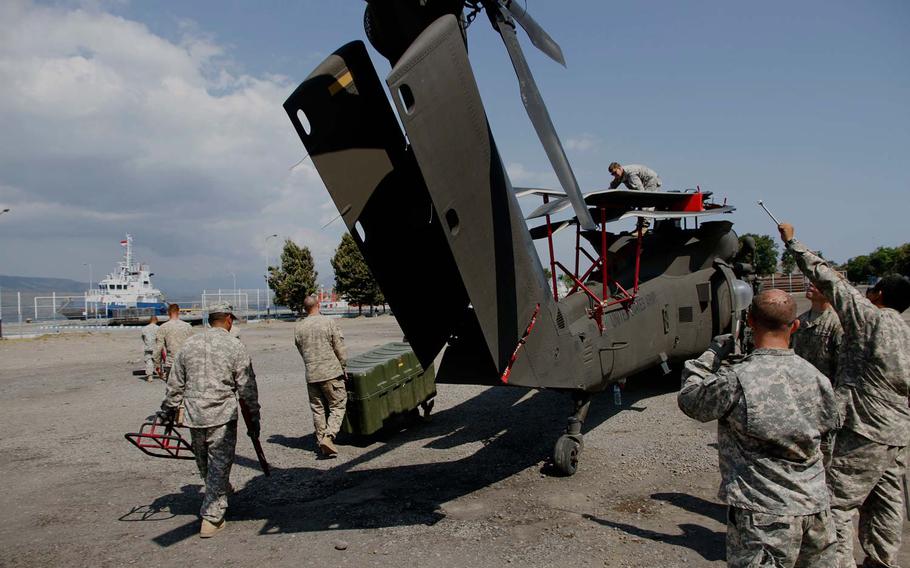 Soldiers at Banyuwangi Port in Indonesia on Oct. 2, 2014, strip down an HH60M helicopter for loading into a cargo ship for deliver to Orient Shield in Japan. (Wyatt Olson/Stars and Stripes) 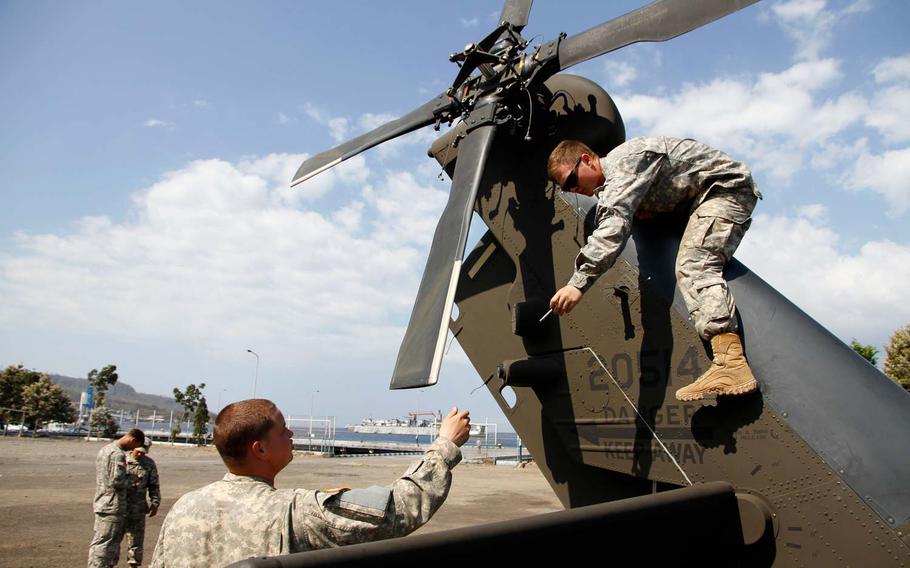 A soldier secures the rear rotor of an HH60M helicopter on Oct. 2, 2014, so that it can be later moved aboard ship with a crane. (Wyatt Olson/Stars and Stripes) 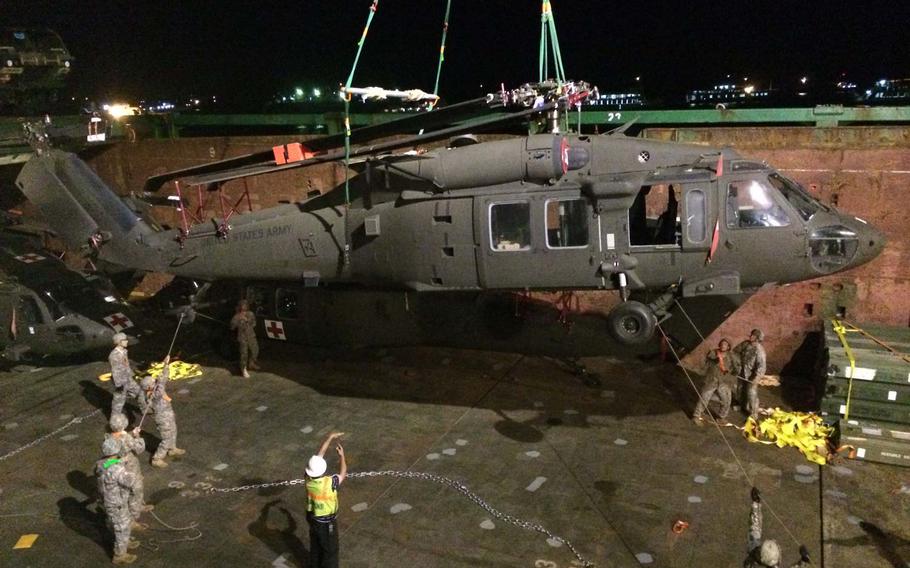 A helicopter is lifted out of a cargo ship on Aug, 23, 2014, at Banyuwangi Port for delivery to the Garuda Shield exercise. The sling holding the helicopter was a new design for Pacific Pathways, and unlike old versions the new slings can be used indefinitely. (Gavin Marchant/U.S. Army) 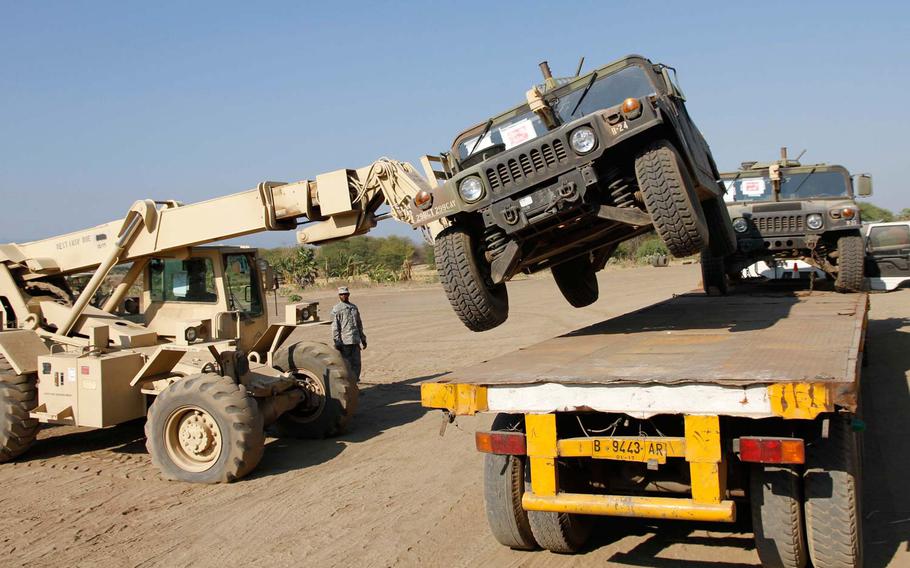 A Humvee is loaded onto a flatbed truck for delivery to Banyuwangi Port in Indonesia after completion of Garuda Shield on Oct. 2, 2014. (Wyatt Olson/Stars and Stripes)

BANYUWANGI, Indonesia — A lot of planning went into the finale for the Garuda Shield exercise, a thunderous live-fire practice assault with ground vehicles, helicopters and troops from America and Indonesia.

But there’s another element of the exercise that required even greater orchestration.

The logistics of getting personnel, equipment, munitions and supplies to a single bilateral exercise in the Pacific is a big job in itself. But Garuda Shield is just one of three legs in the Army’s inaugural Pacific Pathways concept, which included an exercise in Malaysia in September and will end with Orient Shield in Japan this month.

The intent of Pacific Pathways is to transition select Army Pacific units into temporary expeditionary forces moving from one planned exercise to another — and responding to any crisis or disaster in the region if needed.

“There’s many obstacles when you start talking Pathways,” said Staff Sgt. Joshua Griffith, the logistician with the 25th Infantry Division in Hawaii who planned the flow of materiel to Pacific Pathways, particularly Indonesia.

“The whole new Army alignment is mobility for different locations — all at the same time. So when we plan a strategic move like Pathways, we have to not only plan for the first stop, the first exercise, but we had to plan for multiple exercises and multiple stops before we come back to home station."

“It’s difficult to assess it sitting in an office in your home station and try to plan out everything for all the locations.”

After arriving in Indonesia in August, Griffith almost immediately began planning the move out of Indonesia. With the bevy of contracts and clearances needed, it takes more than a month to complete such planning.

It’s particularly challenging for the U.S. military to coordinate with so-called “partner” nations because there are no treaties or status-of-forces agreements — such as are in place with Japan and South Korea, for example — that firmly establish procedures for bilateral exercises.

Previous iterations of Garuda Shield have been modest in comparison to this year’s version, which added to the complexity of the Pathways move.

“Actually, this is the first time a division element has gone in and really tried to conduct logistics in-country,” said Maj. Jay S. Schroder, the 25th ID Army forces logistics representative. “Before, it’s been a platoon or company that goes into a country and takes with them what they need for that amount of time and contracts out the rest.”

For Griffith, who hadn’t been a member of the site-survey team sent to Indonesia to assess infrastructure, the first eye-opening experience came at Banyuwangi, a town on the east end of Java island that’s closest to the marine camp that hosted Garuda Shield.

“The first time I stepped foot on the port at Banyuwangi, I was really surprised. There’s a sunken ship about 100 meters to the left of the pier, which is not very appealing. The bow is sticking out at about a 45-degree angle out of the water.”

The port is largely undeveloped with dirt and gravel surfaces. After lengthy discussions with local officials, the U.S. was allowed to reconfigure certain parts of the port for maneuverability and safety reasons.

This rural and remote region of Indonesia wasn’t prepared to handle some of the massive vehicles brought by the Army.

“Our vehicles are unique,” Griffith said. “Indonesia is not used to a 53,000-pound wrecker or a 38,000-pound Stryker being hauled around their roads.”

The main road through this region is a two-lane highway that’s barely wide enough for two cars and is cluttered with slow-moving trucks and motorbikes.

“This country is designed compact,” he said. “Everything here is small. Road widths are small; entrances and exits everywhere are small.”

Asked if there was any point where he had to concede the impossible, Griffith said, “I don’t believe in saying that I can’t do something.” But he admitted there comes a point where you have to stop and re-evaluate your approach.

For example, the “low-boy” trailers, upon which the large wrecker and fuel trucks were loaded, were so bulky that they couldn’t drive into the gate at Puslatpur Marine Base. Since the U.S. is not allowed to drive the vehicles outside the base, it seemed it would not be “operationally feasible” to bring the wrecker and the strykers onto the base.

“So the only alternative was to stop [the truck] in the middle of the road and get a crane out in the middle of traffic and offload it there,” Griffith said. “It wasn’t the best plan but the only one I could think of, and it’s what we did.”

Then there were the challenges of weaving together logistics for three exercises in three countries.

After loading up at Joint Base Lewis-McChord in Washington and then in Hawaii, the ship first stopped in Indonesia to unload. It then sailed to Malaysia, where it unloaded everything that was left.

“Now when Malaysia does its load up, they load up everything that does not go to Japan on the bottom of the vessel as best they can,” Griffith explained. “When the boat comes up here to Indonesia, I’ll load the vessel with everything that goes to Japan last.”

Griffith described the ship as “essentially a floating motor pool that we can pick and choose from.”

One major lesson learned about the kind of cargo ship to use was that lo-lo was a no-no. Schroder explained:

“We chose lo-lo — being load-on, load-off, which means you need a crane to pick it up on and off the vessel,” he said.

What would have worked better is roll-on, roll-off, or ro-ro, as the logistics crowd calls it, by which vehicles can be driven or trucked off and on.

“Since the basic premise of Pathways is having a contingency response capability, that ro-ro is a critical piece to it,” Schroder said.

If the Pathways force is called to a humanitarian assistance or disaster relief mission – which is potentially part of the expeditionary mix – the host country’s port might not have the capability of hoisting off cargo as quickly as required, he said.

Early Thursday morning, as the flatbed trucks pulled beside the fleet of Humvees, Strykers and containers at the marine base for the trip back to the port, the moving plan had already hit a few snags with missing and late-moving equipment by contractors.

Schroder yelled across the field to Griffith: “Are you on Plan B yet?”

“Plan D-2,” Griffith responded, then scurried off to the next dilemma.