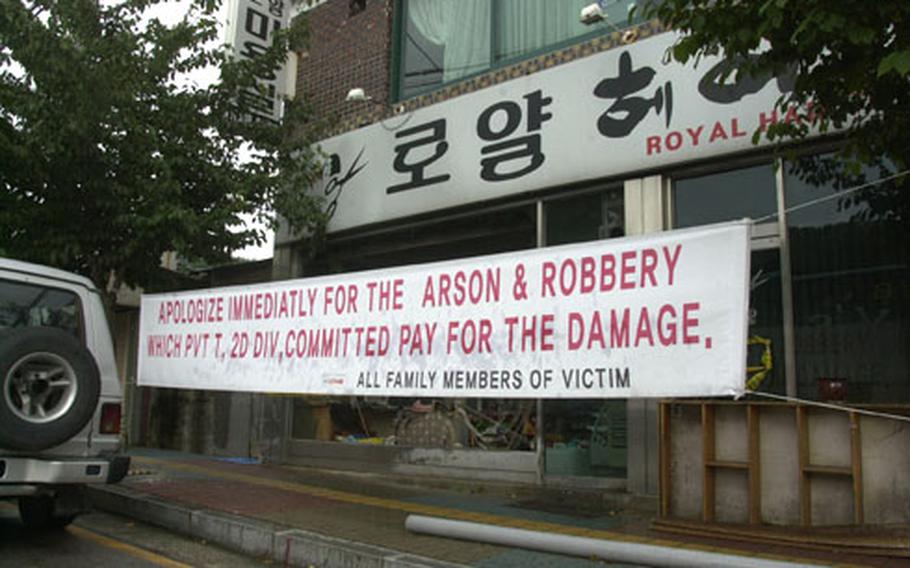 A banner outside the Royal beauty shop near Camp Hovey’s gate in Dongducheon, South Korea, shown in this Sept. 20 file photo, seeks compensation for a May 19 fire that some say was started by a U.S. soldier. (Erik Slavin / S&S)

The subway between Uijeongbu and Dongducheon also has been placed off-limits.

Each restriction will remain until further notice, officials said.

Camp Casey Gate 2 will close at 2 p.m., while the main gate will close on order, depending on conditions outside the gate.

As many as 1,000 protesters are expected at the demonstration, which is expected to last from 4 to 6:40 p.m., Yangju police confirmed Thursday.

The Hanchongryon umbrella group, which held a smaller protest in August, includes the local Northern Kyeonggi Progressive Solidarity group. Hanchongryon has become violent in the past, although August&#8217;s protest was relatively peaceful, military and South Korean police officials said.

As many as 200 people from the pro-military Dongducheon Merchants Association are expected to hold a counter-demonstration, Yangju police said.

The anti-U.S. military protesters are calling for actions ranging from a full pullout of U.S. troops from South Korea to revisions to the Status of Forces Agreement because of servicemember-related crimes.

They have directed their ire specifically at the handling of a May 19 fire at a beauty shop outside Camp Hovey in Dongducheon.

Pvt. Dustin T. Roper likely faces property destruction and breaking and entering charges in the incident, but he will not be charged with starting the fire due to lack of evidence, prosecutors said last week.

Yangju police say Roper was caught on a convenience store video camera breaking flower pots outside the shop, but wasn&#8217;t seen starting the fire. The shop owner, who lived upstairs, was treated for smoke inhalation.