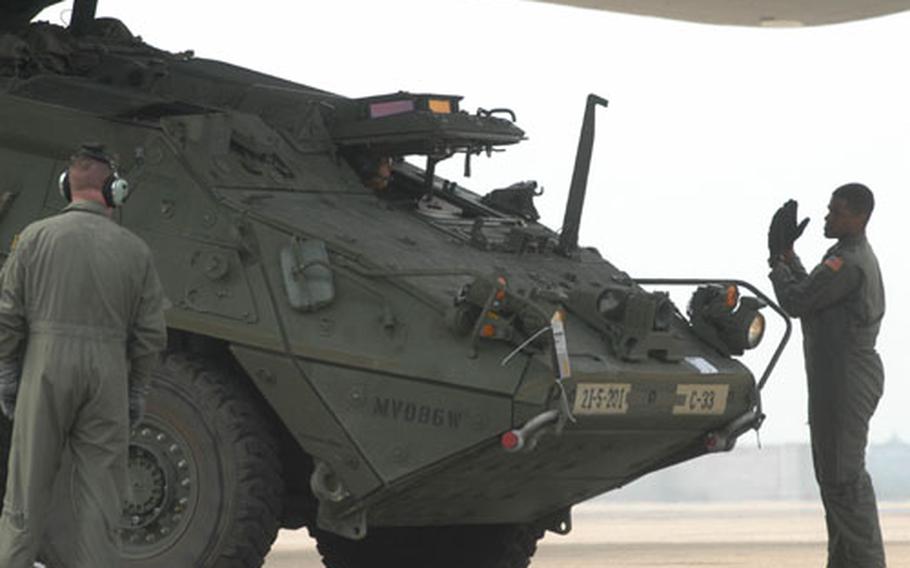 A Stryker armored vehicle moves off a C-17 at Osan Air Base. A platoon of vehicles are in Korea for live-fire training near the Demilitarized Zone on Monday. (Jeremy Kirk / S&S)

A Stryker armored vehicle moves off a C-17 at Osan Air Base. A platoon of vehicles are in Korea for live-fire training near the Demilitarized Zone on Monday. (Jeremy Kirk / S&S) 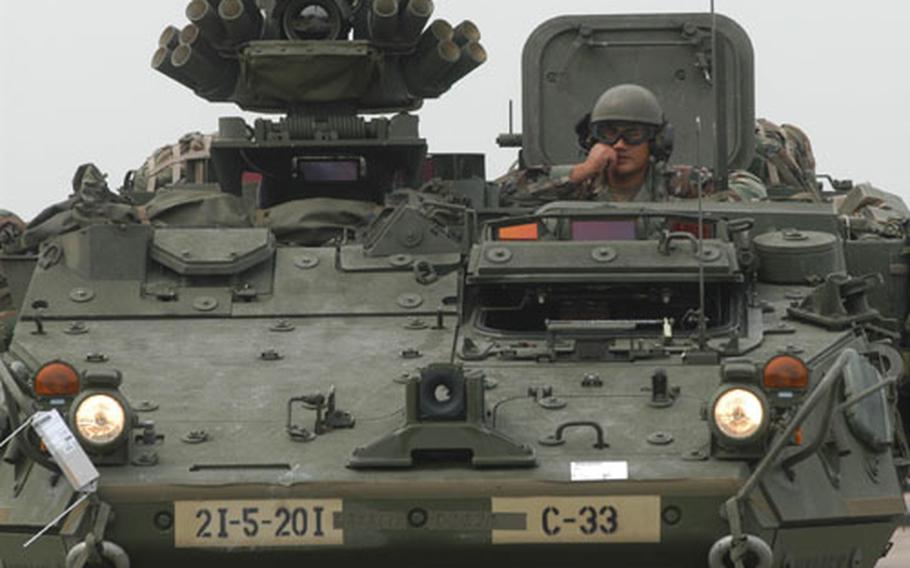 A Stryker armored vechicle moves off the runway Thursday at Osan Air Base. A platoon of vehicles is in Korea for live-fire training Monday near the Demilitarized Zone. (Jeremy Kirk / S&S)

OSAN AIR BASE, South Korea &#8212; Stryker armored vehicles &#8212; the Army&#8217;s latest idea for quick-mobility warfare &#8212; rolled off a C-17 cargo plane Thursday for training near the Demilitarized Zone next week.

The deep-green, beetle-like Stryker is the Army&#8217;s latest effort to move away from heavy, gas-guzzling, tracked vehicles; they&#8217;re billed as being able to move quickly into combat zones while still providing ample firepower.

Lt. Col. Joseph Piek, spokesman for the Stryker brigade at Fort Lewis, Wash., said deploying a platoon of Strykers to South Korea was not connected to continuing tensions with North Korea.

Referring to the U.S. Forces Korea commander, Piek said, &#8220;The military leadership here &#8212; Gen. (Leon) LaPorte &#8212; asked for an element of the Stryker unit to come here&#8221; to train and to demonstrate the Stryker&#8217;s quickness and ability to be moved overseas quickly.

On Monday, they will conduct a live-fire exercise to show how the unit operates as a platoon, Piek said.

About 3,600 soldiers make up the Stryker Brigade Combat Team, he said, adding that the Army plans for six of the units. The second Stryker team &#8212; 1st Brigade, 25th Infantry Division &#8212; has received about one-third of its vehicles and is making the transformation at Fort Lewis, Piek said.

Two Strykers moving off the Tarmac were almost silent. The vehicle is dramatically quieter than an M1A1 Abrams tank or a Bradley Fighting Vehicle, both noisy, exhaust spewing behemoths.

It may lack sports-car sleekness, but the Stryker is fast. It can go about 60 miles an hour, with TOW and Javelin anti-tank missiles carried by the 11 soldiers aboard. One soldier commands and another soldier drives.

The Stryker carries both a .50 caliber machine gun and an MK 19 grenade launcher, giving it a significant amount of tank-killing ability, Piek said.

The unit is working to take maximum advantage of the speed at which the brigade can move as opposed to a conventional infantry unit, Piek said, adding, &#8220;They are still learning to work with that.&#8221;