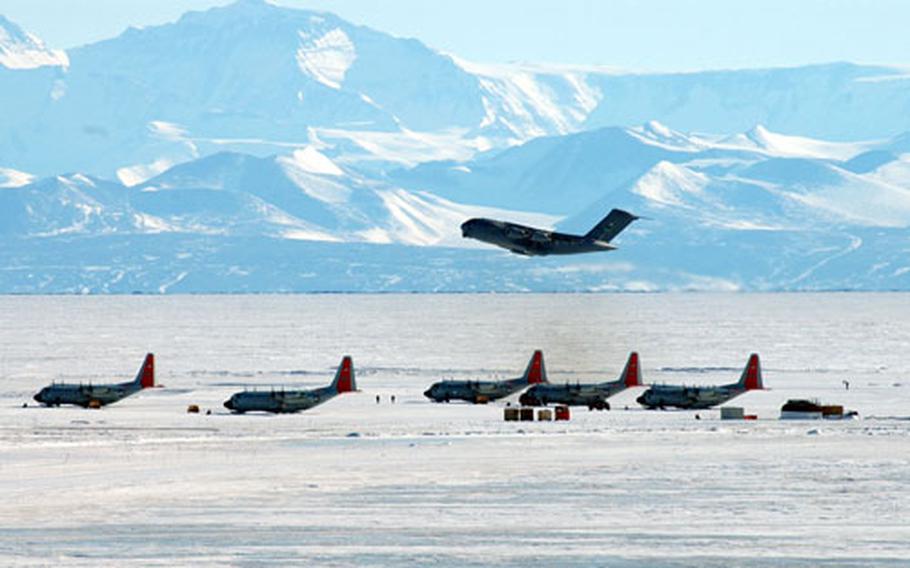 A C-17 from McChord Air Force Base, Wash., takes off from the ice runway at McMurdo Station, Antarctica. On the runway, LC-130s, specially equipped with skis, wait to be loaded. (Mark Doll / Courtesy of U.S. Air Force)

A C-17 from McChord Air Force Base, Wash., takes off from the ice runway at McMurdo Station, Antarctica. On the runway, LC-130s, specially equipped with skis, wait to be loaded. (Mark Doll / Courtesy of U.S. Air Force) 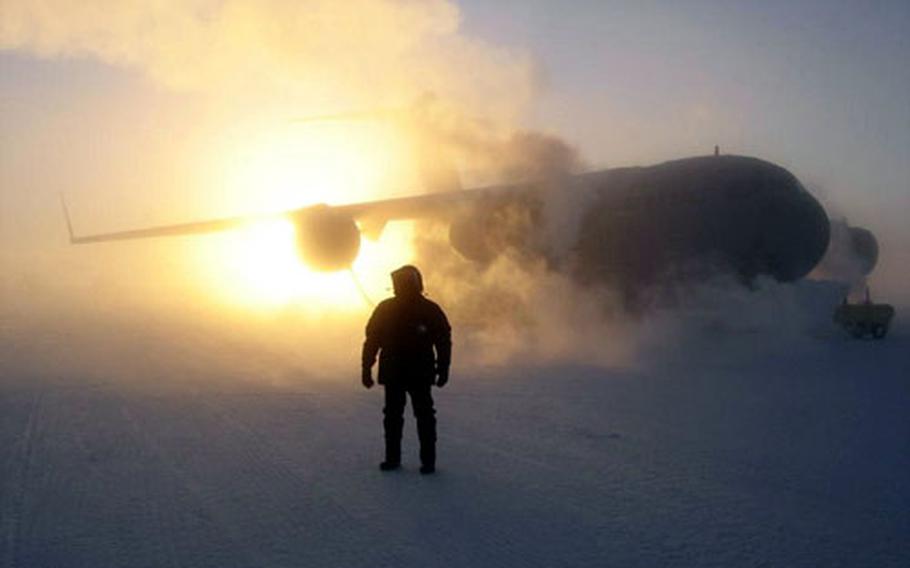 A McChord Air Force Base crewmember stands in front of a C-17 at McMurdo Station, Antarctica. (Steve Mortensen / Courtesy of U.S. Air Force) 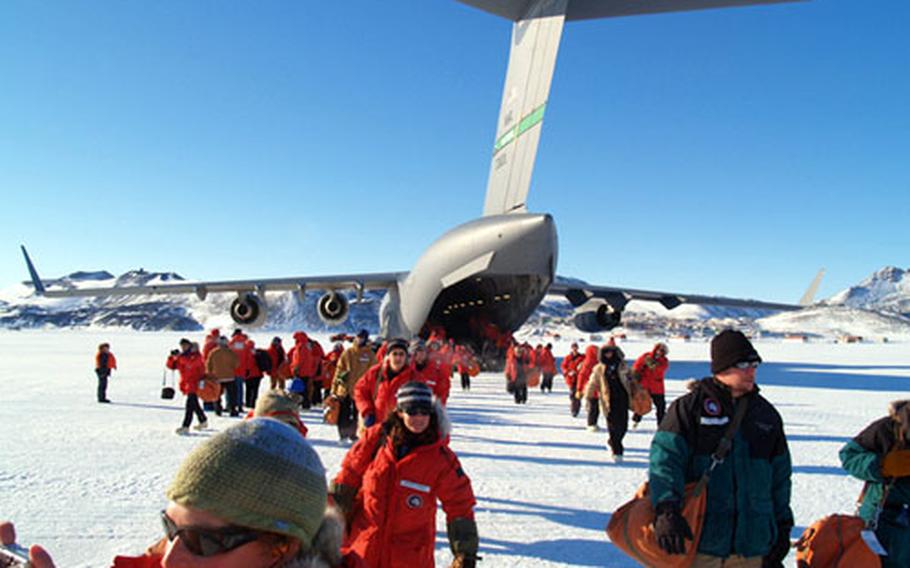 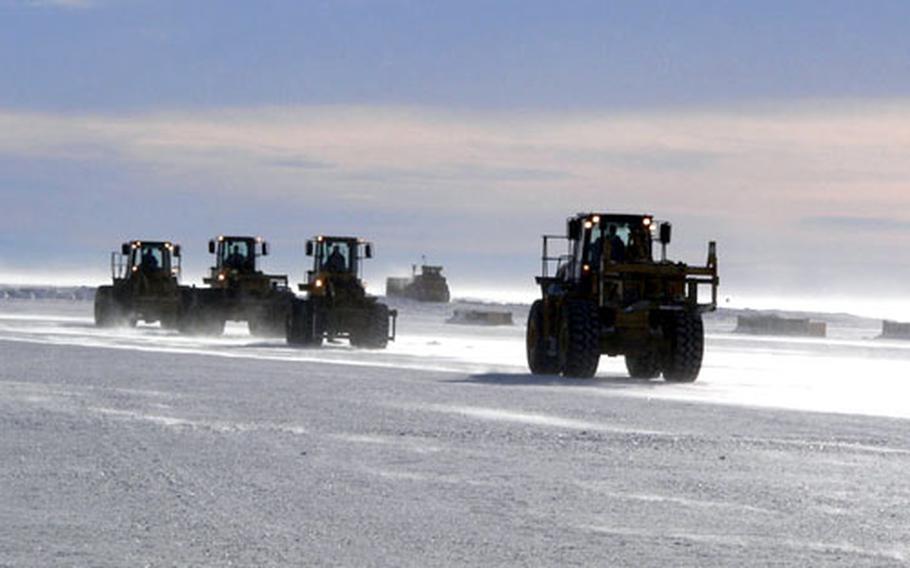 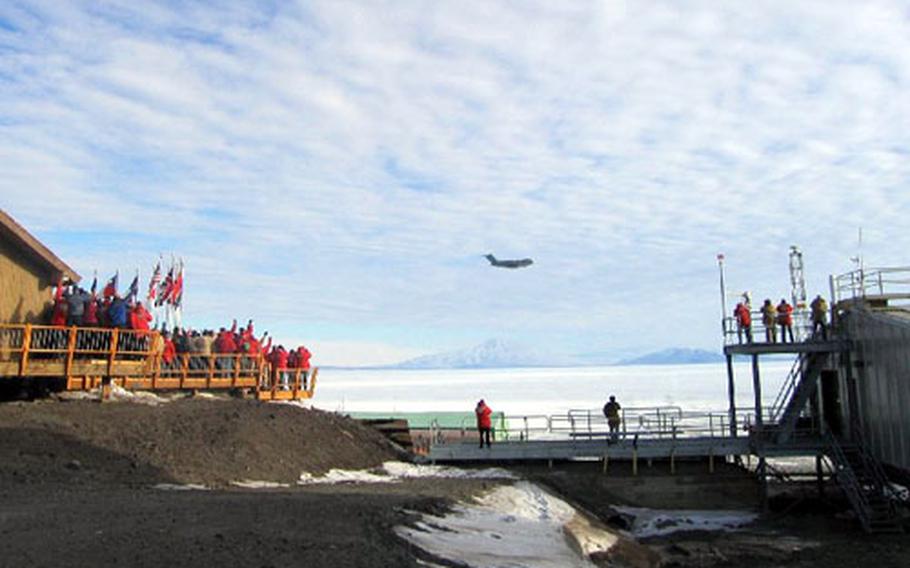 A McChord C-17 makes its final pass by McMurdo Station, Antarctica. This was the final flight of the 2004-2005 Deep Freeze season; the personnel at McMurdo did not see another aircraft until August. (Courtesy of U.S. Air Force)

It might be a 2,000-pound seal perched on the runway, zero visibility or the fact that your airplane has skis. The challenges presented to pilots and crew under Operation Deep Freeze are as steep as the glacial mountains enveloping the landscape.

For the past 50 years, the U.S. armed forces have supported the National Science Foundation&#8217;s mission to Antarctica, flying supplies onto an ice runway on massive C-17s, then ferrying them out to smaller, snow covered research stations aboard C-130s equipped with skis.

The scenery, though, is nothing compared with the work. A giant seal once delayed Campbell&#8217;s flight when it burrowed up through the ice onto the runway above. The seal didn&#8217;t worry Campbell as much as knowing there was a hole somewhere in his runway.

&#8220;It&#8217;s not like you can go out there and move them,&#8221; said Col. Ron Smith, the deputy joint task force commander for the military&#8217;s Support Forces Antarctica, which runs Operation Deep Freeze.

But mammals aside, landing on ice is dangerous, as is the ever-changing, ferocious Antarctic weather. A shift in winds can abort a mission at any time &#8212; even in the last few minutes of flight.

If the weather doesn&#8217;t cooperate, crews turn around for another 2,100-mile flight back to Christchurch, New Zealand, the staging base for missions to Antarctica.

On the ground in Antarctica, if the weather turns, they can be stuck for days.

After the C-17s land in Antarctica and are unloaded, the second part of the mission begins.

Equipment is loaded onto ski-equipped LC-130s, a cousin to the ubiquitous C-130 Hercules. The planes are flown by a special group of pilots from the New York Air National Guard, the only U.S. unit tasked with landing on snow, Smith said.

They fly out to tiny remote sites inaccessible by other modes of transportation and, using giant skis attached to the aircraft, land on flattened snow.

Rockets on the sides of the aircraft help them take off.

Lt. Gen. David A. Deptula, Pacific Air Forces vice commander, is in charge of the task force, but Smith, as deputy commander, spends the October-to-February season on &#8220;The Ice,&#8221; as McMurdo Station is known.

It&#8217;s no misnomer: McMurdo literally is on the ice, set on a small island in a frozen sea. It&#8217;s the hub from which missions are flown, carrying people, equipment, even deep-core samples that help scientists examine the earth&#8217;s history to potentially predict its future. The missions mean more to pilots than just simple flying.

During the 50 years the military has participated in the mission, about 50 people have died, from falling into crevasses or the ocean or in airplane mishaps, he said. So much of the flying is unusual, from the ski or ice landings to navigating in whiteouts &#8212; what Smith described as like looking inside a ping-pong ball.

There are no hangars in which to park aircraft, so maintenance is conducted on the ice. And there is constant sunlight glaring off the endless white.

But the difficulties, the pilots note, are offset by the sheer magnitude of the mission.

Smith, who has been visiting the continent since 1997, agreed.