Plan to institute military oath against suicide could backfire, some experts say 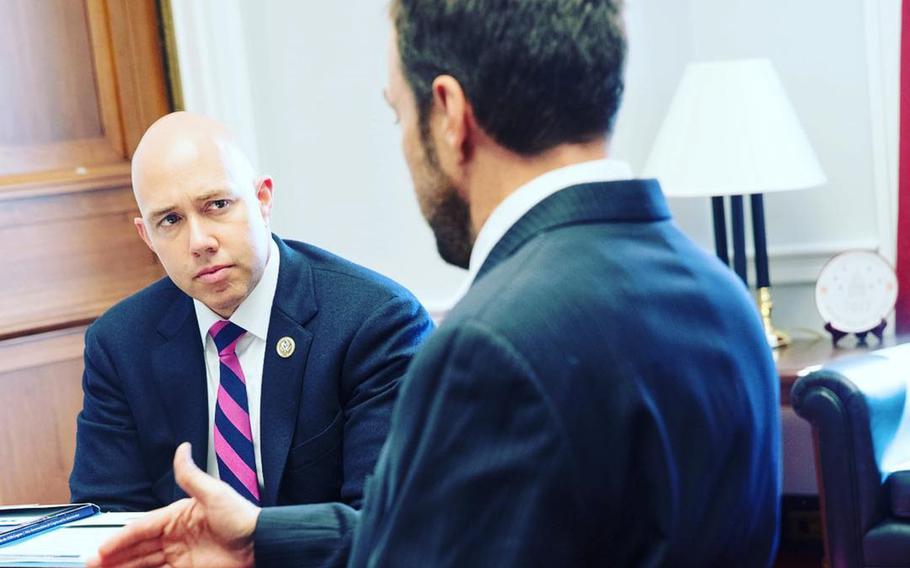 Rep. Brian Mast, R-Fla., speaks with a representative of the Paralyzed Veterans of America on March 8, 2017. Mast, a wounded Army vet, is championing an idea that would ask servicemembers leaving active duty to sign an oath not to harm themselves. (Courtesy Brian Mast)

WASHINGTON — A congressman who served in Afghanistan is championing an idea to request departing servicemembers sign an oath not to harm themselves, as a method to deter veteran suicides.

But some suicide prevention experts contend the plan is likely to do the opposite.

Rep. Brian Mast, R-Fla., who took office this January, is an Army veteran who lost both of his legs in 2010 from a roadside bomb explosion in Kandahar. When promoting the “Oath of Exit” on the House floor last month, Mast said servicemembers are known for honoring their commitments – and if they commit to contacting fellow veterans before harming themselves, they’d do it.

Though it’s well-intentioned, the oath – essentially a no-suicide contract – is an outdated notion proven not to work, and it could even backfire, some experts said.

“It won’t work, to put it bluntly,” said Craig Bryan, a psychologist and executive director of the National Center for Veterans Studies at the University of Utah. “At best, it would be a neutral effect, but it could make things worse.”

When struggling with suicidal thoughts, veterans who sign the commitment could feel an increased sense of shame and guilt, Bryan explained.

“It isn’t just that it didn’t work. It actually had the opposite effect,” said Thompson, who is now a vice president of Cohen Veterans Network. “It made it so that the person who signed it wouldn’t talk with their provider about feeling suicidal because of this fear of, ‘I signed this promise’.”

The oath was included in the 2018 National Defense Authorization Act that passed the House on July 14. Senators are on recess for the next few weeks but are expected to take up work on the NDAA after they return Sept. 5.

Mast said he created the bill with the goal of reducing veteran suicides.

The oath would be voluntary.

The VA analyzed millions of veterans’ records and reported last year that an average of 20 veterans died from suicide each day in 2014. While veterans made up only about 8.5 percent of the U.S. population in 2014, they accounted for 18 percent of suicides.

“Nearly every week I hear from a veteran who is thinking about taking their own life; maybe walking into their garage, turning on their car and never coming out,” Mast said on the House floor. “The idea for this came from friends of mine who had struggled with suicidal thoughts leaving the military. People who have actually been there on the edge.”

The American Psychological Association is asking senators to keep the oath out of the NDAA.

“The ‘Oath of Exit’ language… could backfire in lethal ways, by discouraging help-seeking among veterans in crisis and engendering a false sense of security among those to whom the oath is given,” Heather O’Beirne Kelly, director of military and veterans health policy for APA, wrote in an email.

Kelly said the APA wants the Defense Department and VA to use evidence-based suicide prevention practices.

Bryan, an Iraq war veteran, led a study comparing the effectiveness of no-suicide contracts with an alternative approach -- to create a crisis-response plan people can use when struggling with suicidal thoughts. The study was published in January in the Journal of Affective Disorders.

Researchers studied active-duty soldiers at Fort Carson, Colo., who had gone to a health care provider for a mental health crisis.

During a six-month period, more soldiers who signed a no-suicide contract attempted suicide than did soldiers who received a crisis-response plan. Crisis response planning was also found to result in a faster decline in suicidal thoughts and fewer inpatient hospitalizations, according to the study.

Bryan compared his crisis-response plan to CPR – anyone can do it if they’re trained, and it could help save someone’s life before they can get to a hospital or clinic, he said. It involves talking with someone about how they got to that point, warning signs and strategies to manage stress, and identifying people who could be supportive and reasons they have for living. They combine those things with a list of resources, such as health care providers and the number of a suicide hotline, onto an index card.

Thompson described a similar approach to Bryan’s crisis-response plan that’s implemented at the VA and clinics in the Cohen Veterans Network.

“Veterans can keep it in their wallets, or there’s an iPhone app you can put this all in,” Thompson said. “If you start feeling that way, you can immediately jump to your safety plan.”

“We are at a critical juncture, whether we’re going to put these solutions into practice or not, and that’s a question I think we have to answer as a society, and policymakers have to answer as well,” Bryan said.

No-suicide or no-harm contracts used to be common. Though other health care providers may still use them, Thompson said it stopped being standard practice about 10 years ago, when studies began getting published that showed they had no, or negative, effect.

She penned a post on the Cohen Veterans Network website last week after hearing about the Oath of Exit provision, discouraging it.

“When you hear about something that might be going against what actually works, it really is of grave concern,” Thompson said. “Nowhere in the VA or other spaces where suicide prevention is taken seriously does that exist. A community of clinicians and researchers have continued to try to get the word out that this doesn’t work.”