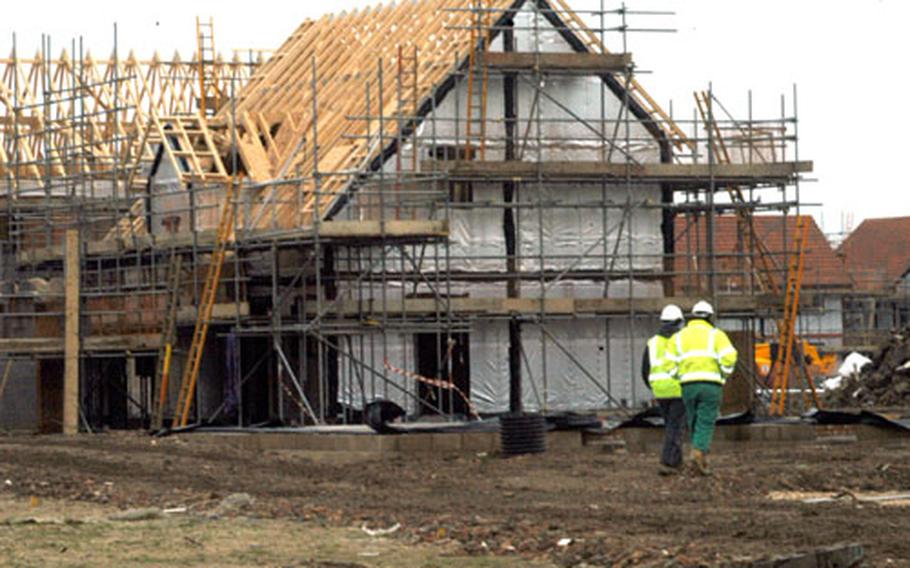 Construction workers walk past a home under construction adjacent to RAF Lakenheath. A lack of convenient housing options around the tri-base area has prompted the housing office to contract for 440 homes to be built right outside of RAF Mildenhall. (Bryan Mitchell / S&S)

Construction workers walk past a home under construction adjacent to RAF Lakenheath. A lack of convenient housing options around the tri-base area has prompted the housing office to contract for 440 homes to be built right outside of RAF Mildenhall. (Bryan Mitchell / S&S) Ipswich County Councillor Roger Pendleton looks over a map of the village of Mildenhall while discussing his objections to the U.S. Air Force plans to hire a developer to build 440 homes adjacent to RAF Mildenhall. (Bryan Mitchell / S&S) A red outline (at top of photo) marks the tract of land where the U.S Air Force is planning to build a housing development. (Photo courtesy of the Ashwell Group)

RAF LAKENHEATH &#8212; A longtime East Anglia politician is leading an effort to quash a housing development slated to be built primarily for U.S. Air Force personnel.

The development plan has drawn the ire of Ipswich County Councillor Roger Pendleton, who lives less than a mile from where the 600-home development is planned.

Pendleton cites increased traffic, proximity to a nearby middle school and disturbances to local farmers as reasons why he&#8217;s fighting the development.

The U.S. Air Force asserts the development is critical to keeping airmen and their families closer to the bases.

The housing development is slated to be constructed by the Ashwell Group, which secured the contract from the Air Force following a competitive bidding process.

The Cambridge-based developer is working to secure the local permits to build the housing tracts off a rural two-lane road that runs parallel to RAF Mildenhall and connects the villages of Mildenhall and West Row.

Ashwell marketing representative Suzanne Sutton said the development will provide more than 100 units of affordable homes to British nationals as well as improve transportation by including a system of bicycle and walking trails that connect to the base.

Bloemhard, who is a U.S. Air Force civilian employee, refused to release the dollar amount of the contract with Ashwell Group.

He said that roughly 2,000 of the 4,500 families who live off base currently have commutes of longer than 20 minutes. He said some people travel as far as an hour each way to and from work.

Still, Bloemhard said he understands the concerns of Pendleton and others.

Pendleton is quick to point to a local ordinance that he said should kill the development plans.

The ordinance reads: &#8220;No development shall be permitted under this policy if it would have a significant detrimental impact on existing communities, the environment, local services, best or most versatile agricultural land, highways or nature conservation.&#8221;

To complicate matters, Pendleton claims Ashwell is getting special treatment because it is building for the Air Force.

Despite his steadfast opposition to the current site, Pendleton said he&#8217;s willing to compromise and has suggested an alternative site. He would like the development to be built adjacent to Stocks Corner in Beck Row, which also is close to RAF Mildenhall.

Bloemhard said the Air Force and developers looked at several sites before settling on the current location.

Meanwhile, Pendleton has been joined in his campaign against the development by a group of concerned citizens who were scheduled to meet this week in Mildenhall.

If they succeed in persuading councillors to refuse permits to the Ashwell Group to build on the chosen tract, the entire process would have to recommence.

The Ashwell Group has scheduled a series of town meetings to discuss the development plan with local residents this month.