Plan to base Ospreys at Yokota Air Base delayed until 2020 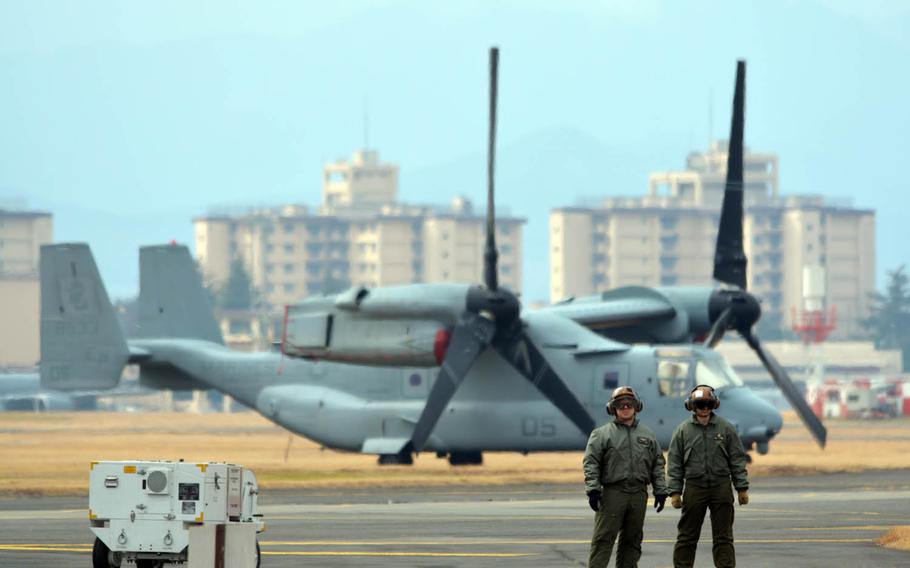 YOKOTA AIR BASE, Japan — A plan to base CV-22 Ospreys in western Tokyo has been delayed with the first of the tilt-rotor aircraft due to arrive in fiscal year 2020, the Department of Defense said.

Yokota — headquarters of U.S. Forces Japan and 5th Air Force — was to have received three Ospreys this year. The hybrids are capable of taking off and landing like helicopters, then tilting their rotors to fly long distances as fixed-wing aircraft.

“Originally announced to arrive in the fourth quarter of fiscal year 2017, DOD now expects their permanent arrival in fiscal year 2020,” a statement said.

Eventually the base is supposed to accommodate a Special Operations Squadron of 10 Ospreys, adding 1,100 personnel to a population of 11,500.

Yokota officials did not immediately provide reasons for the delay.

Some people living in communities near Yokota oppose the plan to base the aircraft there, and have held a number of protests to make their concerns known.

The Osprey will provide increased capability for U.S. Special Operations forces to respond quickly to crises and contingencies, including humanitarian crises and natural disasters, in Japan and across the region, DOD has said.

“It will also increase interoperability, enhance operational cooperation, and promote stronger defense relations with the Japan Self-Defense Forces,” the Pentagon said in May 2015.

Plans to replace Yokota’s aging fleet of 14 C-130H Hercules cargo planes with state-of-the-art C-130Js are running close to schedule with the first of the new planes delivered last week.