Plan for Guam buildup will be presented to PACOM July 11 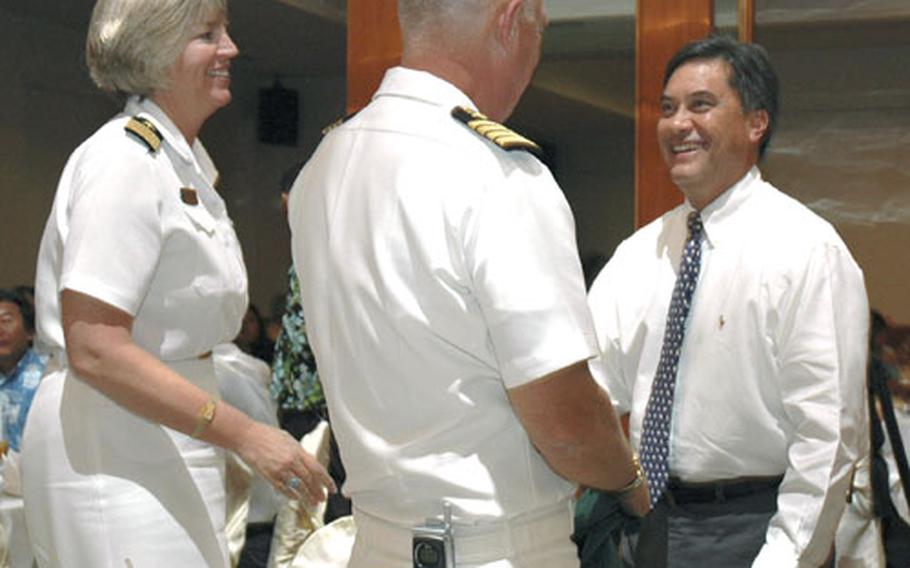 The plan will go to Admiral William J. Fallon, commander of the Pacific Command in Hawaii, according to the governor&#8217;s staff.

Local leaders hope that will mean more details about the planning for a $10 billion military buildup that&#8217;s to bring 8,000 U.S. Marines from Okinawa to Guam.

Camacho reviewed projections for Guam&#8217;s infrastructure needs &#8212; an estimated $2.6 billion in improvements &#8212; at a Guam Chamber of Commerce luncheon on Wednesday. Camacho said local leaders must work closely with the military to take advantage of the billions of dollars of Pentagon investment as Guam becomes home to the Marines, their families and their staff by 2014.

&#8220;These are exciting and critical times for our island,&#8221; Camacho, a Republican who is running for reelection, told about 200 chamber members at the Guam Holiday Resort hotel. &#8220;We have one opportunity and only one opportunity to do it right. &#8230; The growth must be mutually beneficial.&#8221;

Camacho, like many other elected officials on Guam, supports the Marines&#8217; move from Okinawa, which is scheduled to start in 2008. It calls for at least $10 billion in spending, a mix of U.S. and Japanese funding.

Currently, about 6,500 servicemembers are stationed in Guam. By 2014, Guam&#8217;s military population could reach 35,000, counting servicemembers, family members, Department of Defense workers and other staff needed on base, according to the governor&#8217;s office.

On Wednesday, the governor and his directors of utilities, public works and economic development explained their estimates for Guam&#8217;s needs as the military increases.

Larry Perez, Guam&#8217;s head of public works, told the group that local military officials have been meeting with Guam government to discuss needs and how they can be met.

Ultimately, local officials would like to improve their own systems while attracting the military as a customer to buy more power, water and even trash storage, according to Simon A. Sanchez II, chairman of Guam&#8217;s Consolidated Commission on Utilities.

To do that, Guam must improve the reliability and capability of many services, local officials have acknowledged.

But Guam also faces challenges from the influx of construction workers, merchants and other investors expected to precede and follow the Marines here. Guam&#8217;s current population of 169,000 could reach 180,000 by 2010 even without the military expansion, according to the governor&#8217;s office.

To prepare for that growth, Camacho said Wednesday that the following spending is needed: