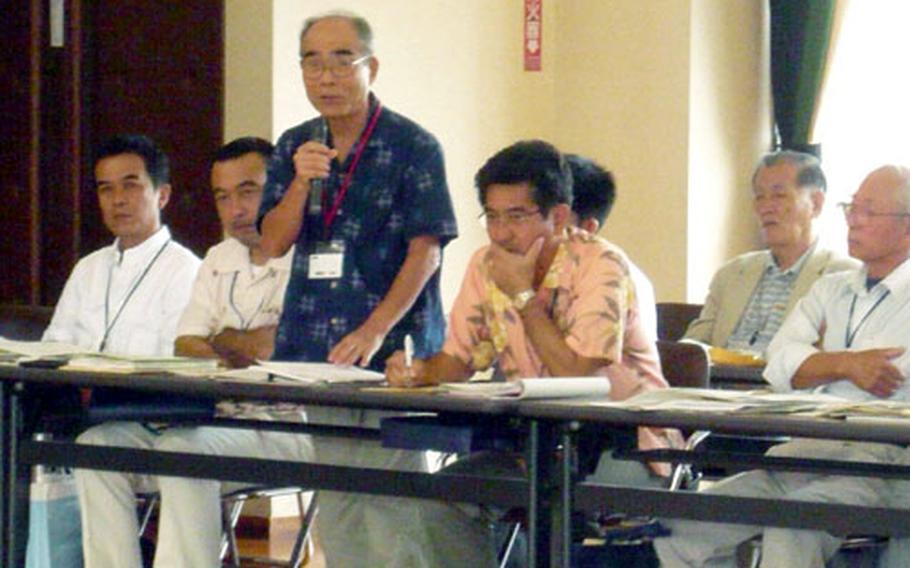 YAMATO CITY, Japan &#8212; Plaintiffs in litigation over military aircraft noise in mainland Japan and Okinawa agreed Saturday to unite in their fight for quieter skies.

For the first time in the more than 30-year history of such noise lawsuits in Japan, plaintiffs representing several groups seeking compensation and bans on early morning and late-night military flights gathered near Naval Air Facility Atsugi.

"It is extremely difficult to equally fight against massive state power alone," plaintiffs said in a declaration adopted by the groups Saturday afternoon. "However, we know we can exert equal or more than equal power if we have company that share and fight for a common objective."

The meeting, attended by more than 90 representatives, helped unite the groups with a common goal, attendees said.

"We saw and were encouraged that there are many people fighting together against the noise damage," said Tokio Kaneko, a Sagamihara city assembly member who was among those representing a coalition from Atsugi.

Representatives of five groups from areas around Yokota Air Base, Naval Air Facility Atsugi and the Japan Air Self-Defense Force&#8217;s Komatsu Air Base on mainland Japan, and Marine Corps Air Station Futenma and Kadena Air Base on Okinawa discussed the status of their lawsuits and exchanged information and ideas.

Representatives from two other groups who are preparing to file lawsuits &#8212; a second Yokota-area alliance and a group from the Marine Corps Air Station Iwakuni area &#8212; also joined in the meeting.

Many in attendance stressed the importance of not giving up their efforts despite continued court rulings against the suspension of early morning and late-night flights.

Eiji Fujita, the leader of the Atsugi plaintiffs, said they have lost litigation to get those flights suspended, but he pointed to several monetary victories in court.

Michio Fukumoto from the Yokota area suggested the groups pool any money awarded in lawsuit settlements to help back other groups looking to file suits.

For those preparing to file lawsuits, Saturday&#8217;s gathering gave them boost, they said.

"To unite and bring this mood back [to Iwakuni] will be another step forward [toward filing a lawsuit]," said Jungen Tamura.

More than 7,000 plaintiffs filed a lawsuit over jet noise at Naval Air Facility Atsugi in December 2007 in Yokohama District Court. The litigation seeks 5.3 billion yen (about $53 million) in damages and suspension of flights between 8 p.m. and 8 a.m.

It is the fourth of its kind at Atsugi. Ninety residents filed the first lawsuit in 1976. The second suit was filed in 1984 by 161 residents.

Damages for noise were awarded in both, but flight suspensions were ruled out. In the third lawsuit, more than 4,900 residents were awarded a combined 4 billion yen (about $34.8 million at the time) for the damages in 2006.

A group filed a suit in three phases from 1976 to 1982. Plaintiffs in the first and second litigation were awarded compensation for past damages, but suspension of late-night and early morning flights was rejected by the Supreme Court in 1993.

The Tokyo High Court recommended settlement in the third litigation in 1993, with the U.S. and Japanese governments agreeing to limit flights between 10 p.m. and 6 a.m. Although night flights were limited before the agreement, it was the first time they specified the time.

A second group filed two lawsuits involving 359 plaintiffs in 1994 and 2000, demanding compensation, flights banned between 9 p.m. and 7 a.m. and suspension of any training flights above populated areas. It is pending in the Supreme Court.

A lawsuit was filed by 12 plaintiffs in 1976, demanding compensation and suspension of late-night and early morning flights by Japan Air Self-Defense Force jets as well as U.S. jets that train there. A second lawsuit was filed in 1983.

The two suits were combined in 1985, increasing the number of plaintiffs to 330. The Tokyo High Court awarded compensation but rejected flight suspension in 1994.

About 1,800 plaintiffs filed two other lawsuits, one in 1995 and another in 1996. The Nagoya High Court awarded 1.19 billion yen, but rejected flight suspension in 2007. Residents are currently preparing two other lawsuits.

To seek "quiet nights," 601 residents living in six communities surrounding Kadena Air Base filed a lawsuit in 1982, demanding all flight activities be suspended at the base between 7 p.m. and 7 a.m. In 1992, 306 more residents joined in the litigation.

In March 1994, the Naha District Court awarded $7.6 million to 768 residents. The flight-time restriction, however, was rejected. The residents appealed.

In March 2000, the second lawsuit was brought by 5,542 residents, seeking the halt of all flight operations on the base between 7 p.m. and 7 a.m. and $59.5 million compensation for physical and mental suffering.

In February 2005, the Naha District Court awarded 3,881 residents a total of $26.7 million in punitive damages, but the ban on aircraft operations was dismissed. The case was appealed in February.

The second lawsuit at the appeals court filed by 5,541 residents is pending in court.

In October 2002, about 200 residents in Ginowan sued the Japanese government and the air station&#8217;s commanding officer, seeking $2.5 million and suspension of flight activities at the base. In April 2003, 204 more residents joined, seeking a total of $5.51 million.

The lawsuit was dismissed by the Naha District Court in September 2004 and ultimately by the Supreme Court in February 2006.

With the Japanese government as a sole defendant, the litigation continued for six years and in June 2008, the district court ordered the government to pay $1.3 million yen compensation to 396 residents. The suspension on aircraft activities was ruled out. The residents immediately appealed.