Pizza MREs on the way to troops by next year 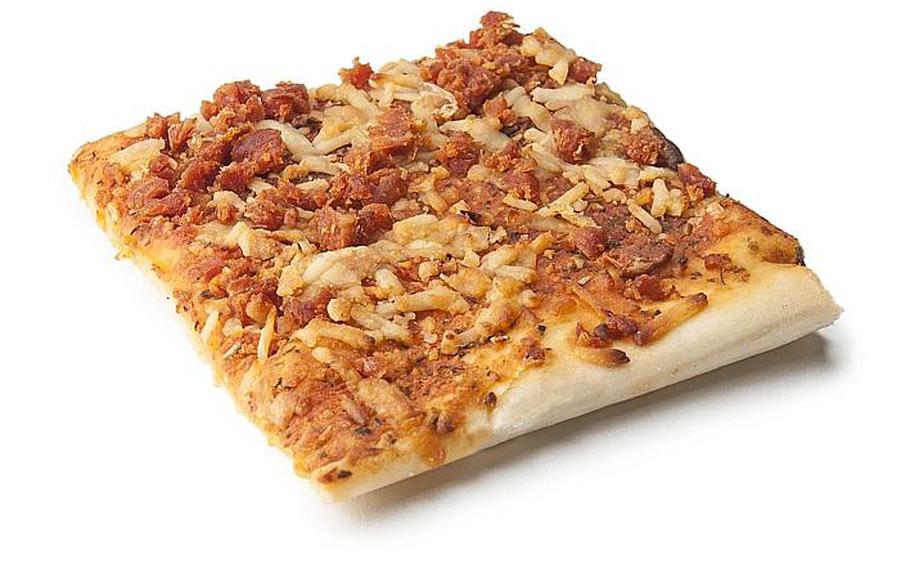 Army researchers have developed an MRE pizza that stays in a pouch for three years without turning soggy or spoiling. It could reach field soldiers' mess kits within a year. (Natick Soldier Research, Development and Engineering Center)

Army researchers have developed an MRE pizza that stays in a pouch for three years without turning soggy or spoiling. It could reach field soldiers' mess kits within a year. (Natick Soldier Research, Development and Engineering Center) 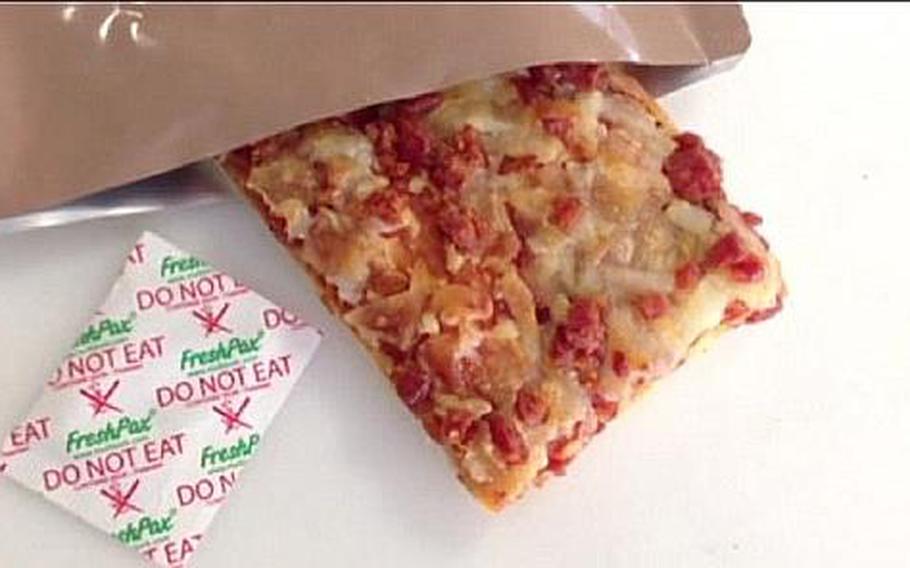 The biggest challenge to keeping a pizza tasting fresh while packed in a pouch is to prevent moisture from penetrating the crust and sauce. MRE pizzas could reach troops in the field by next year, Army researchers say. (Natick Soldier Research, Development and Engineering Center)

Troops will soon get pizza in places where delivery drivers don’t go.

The military is preparing to produce Meals, Ready to Eat pizzas that are engineered to stay fresh for three years in a pouch. Troops could taste their first pizza MREs in the field by next year, Army officials say.

These don’t compare to the freshly made pizzas at an Italian restaurant, but they stack up well to store-bought pizzas, said David Accetta, spokesman for Natick Soldier Research Development & Engineering Center in Massachusetts.

“I think it’s better than frozen pizza,” he said.

The pizzas come with only one topping — pepperoni — but more varieties will be added as troops weigh in on the kinds they like, he said.

The current generation of MREs must run out before the next generation, which includes the pizzas, can be distributed, Accetta said. He estimated the changeover will happen by 2019.

Some initial reactions were very positive.

“I’m all about it. Adding to the variety of choices for MREs is an outstanding idea, especially if it’s a good choice,” said Capt. Orlandon Howard with the 2nd Armored Brigade Combat Team deployed to Europe. “It would be like adding flavor and meat to the wheat bread that already comes in the MRE, and that’s a great idea.”

“When you’re away from home, it’s nice when you’re able to have food that you would typically enjoy if you were home,” he added. “I think it I makes things a feel a little easier, and home feel a little less distant.”

Army researchers spent years trying to develop a pizza without a lot of preservatives that would look and taste fresh after being stored for years in warm temperatures. The key is to maintain the pizza’s pH balance, prevent oxygenation and suppress moisture, Accetta said.

Researchers employed molecular science to create dough-drying methods that led to “shelf-stable bread,” which is used in MRE pocket sandwiches and now the pizzas, Accetta said.

Pizzas and pocket sandwiches are among the evolving “first-strike meals” that are lighter and more compact than previous MREs, making them easier for soldiers on the battlefield to carry them in rucksacks.

As with all new MREs, professional taste testers sampled the prototypes to gauge the flavor, texture and how the pizzas feel in the mouth, Accetta said. If the pizzas pass muster with the pros, then samples are given to soldiers and Marines.

Servicemembers have the final say, he added.

Troops have wanted pizzas since the first MREs rolled out in the 1980s. These pizzas will seem like a gourmet treat to troops in the field, something that civilians who try them while in a comfortable house won’t understand, Accetta said.

“You have to be cold, starving, exhausted to really appreciate them,” he said.