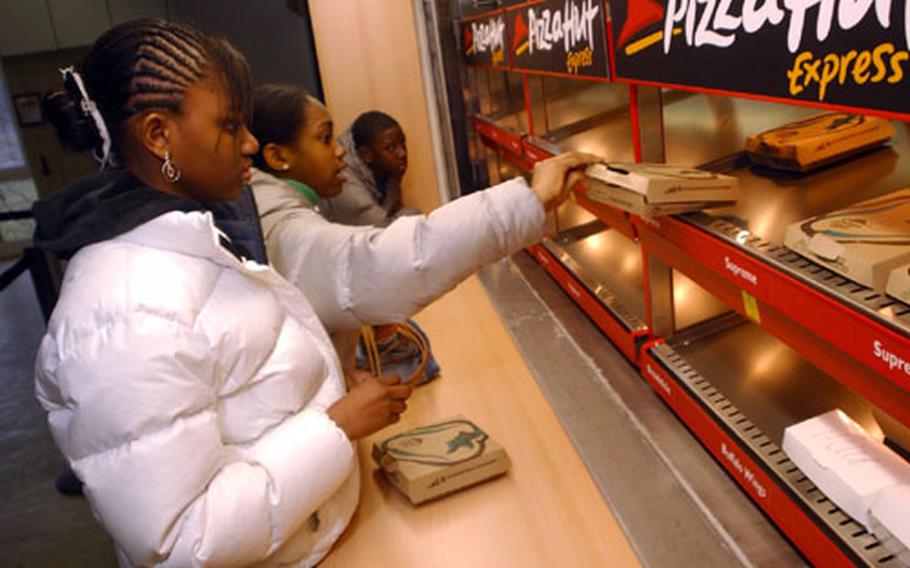 There&#8217;s something about the new Pizza Hut, too. It&#8217;s in the a la carte section of the cafeteria shared by students at Weisbaden American Middle School and Gen. H.H. Arnold High School.

Last week, about one-third of the students from Wiesbaden were eating the 6-inch Personal Pan Pizzas, even though at $2.99 and $3.49 they cost more than the $1.90 charged for middle school lunches.

Pizza Hut was also selling chicken wings, bread sticks, salad and noncarbonated drinks. But the pizzas were the favorite.

&#8220;Pepperoni is the most popular, followed by cheese,&#8221; according to Darrin McCready, the food business manager for the Army and Air Force Exchange Service in Wiesbaden.

Students from Gen. H.H. Arnold were even hungrier for pizza. Even though school lunches cost them $2.10, about half of the students were spending the extra money for Personal Pan Pizzas.

The school lunch on this day consisted of a choice of ravioli or fish sticks, with garlic bread, salad, peaches and a cookie.

Kids aren&#8217;t the only ones scarfing down the pizza. The Wiesbaden Pizza Hut&#8217;s delivery and takeout business is also popular.

Peterson, whose employer, AAFES, operates most school cafeterias and food concessions on U.S. military bases, said Pizza Hut was brought in after consulting with the Wiesbaden base command, DODDS and the U.S. Department of Agriculture.

The Wiesbaden Pizza Hut opened for students Dec. 1. after a short test run. If business is good, Peterson said, AAFES will approach other bases with the idea of putting Pizza Huts in more schools.

&#8220;We decided to test it again with Pizza Hut because we could use the same location to deliver pizza in the evening.&#8221;

Neither the added cost nor the idea of Pizza Hut for lunch has caused a problem, according to Barbara Hickman, acting principal of the middle school.

Hickman said pizza might be a nutritional improvement over the former a la carte meal of choice.

But eating pizza every day shouldn&#8217;t be one of them, according to Don Armell, president of the Parent-Teacher Association for Department of Defense Dependents Schools in Europe.

Schools have been serving pizza for lunch for years &#8212; burgers, too.

But these days, plumpness is a problem.

About 15 percent of school-aged children in the United States are seriously overweight, according to the American Academy of Pediatrics. That&#8217;s nearly 9 million youths, or three times as many as in 1980.

&#8220;The trend is that schools and school districts are increasingly concerned about what appears to be the deteriorating health of school-aged children,&#8221; said Julia Lear, director of the Center for Health and Health Care in Schools at George Washington University in Washington.

&#8220;You can&#8217;t open the newspaper these days without seeing something about kids and fat. So this [Pizza Hut in Wiesbaden] is going against the trend,&#8221; Lear said.

But Christopher Peterson, AAFES-Europe business program manager, said some parents want items such as pizza and hamburgers on the menu so they know their kids will eat. Other parents, he said, ask that more nutritious foods be served.

&#8220;We encourage parents to come eat lunch with their children,&#8221; Peterson said. &#8220;There is no substitute for parental involvement in developing healthy eating habits.

A little pizza is not bad for you, according to Lt. Col. Joice Carter, a clinical dietitian at Landstuhl Regional Medical Center.

Carter said teenagers should consume 40-80 grams of fat per day, including 4-8 grams in saturated fat. Total sodium should be 2,400 milligrams.

According to the Pizza Hut Web site, a Personal Pan Pizza with pepperoni weighs in at 32 fat grams, with 12 grams of saturated fat and 1,360 milligrams of sodium.

&#8220;Someone should take responsibility to provide [nutritional] guidance to the kids,&#8221; Carter said. &#8220;A lot of kids, particularly athletes, are interested in having healthy choices.&#8221;

Armell said he didn&#8217;t blame DODDS-Europe for the poor physical condition of some of today&#8217;s young people.

He noted that the European PTA a few years ago called for at least 30 minutes per day of physical education in all DODDS schools. Armell said the same resolution was adopted last year by the 6 million-member national PTA.

Armell said he expected nutrition to be on the agenda when the PTA convention meets May 17-19 in Dockweiler, Germany.