Pirates, poachers and terrorists: Air forces in Africa talk with US about challenges 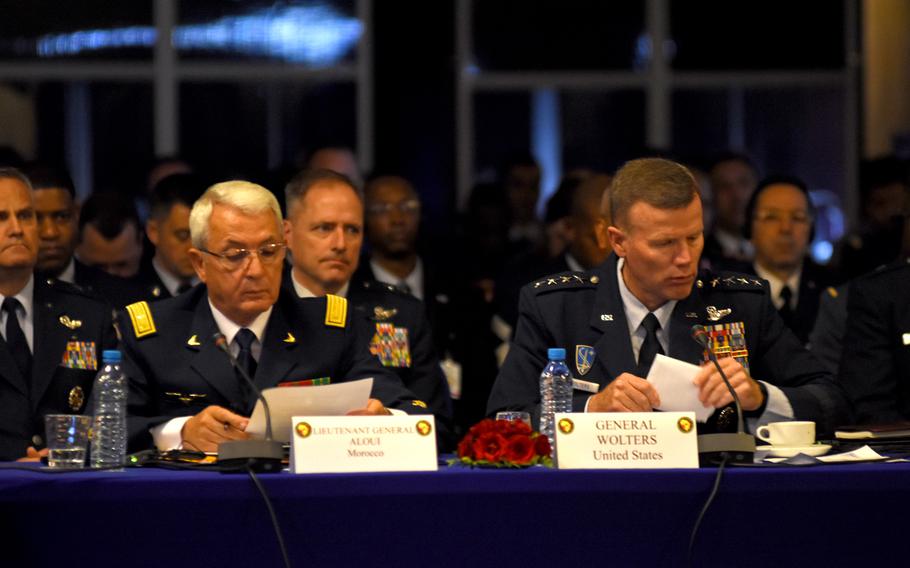 MARRAKESH, Morocco — Security concerns ranging from terrorism and refugees to maritime piracy and poaching prevention are part of the talks at a conference of senior air force commanders from across Africa and the United States that opened Monday.

“We understand that security across the African continent is vital, not only to you, but it is vital to the United States of America as well,” Stephanie Miley, charge d’affaires at the U.S. Embassy in Morocco, told more than two dozen participants of the 8th African Air Chiefs Symposium.

“That is why the symposium is dedicated to developing a broader understanding of our common threats and mutual interests,” Miley said.

The two-day forum is hosted jointly by the Royal Moroccan Air Force and U.S. Air Forces in Europe – Air Forces Africa, which is represented by its commander, Gen. Tod Wolters.

Deterring terrorism on the continent is a common challenge for African nations and the United States. But the security threats in Africa are also as diverse as the geography, resources and political climates of the 27 African nations at this year’s symposium.

African air forces delegates, sitting around a large, horseshoe-shaped table, briefly spoke of the challenges facing their countries. These included some problems not commonly tackled by air forces in other parts of the world.

Zambia’s air force talked about its country’s difficulties in dealing with refugees fleeing violence from the neighboring Democratic Republic of the Congo. For Benin, along with other coastal African countries, combating maritime piracy is a problem, officials said.

In Botswana, the country’s air force is heavily engaged in hunting poachers in order “to save our wildlife,” said its commander, Maj. Gen. Seleka Phatshwane.

Some participants mentioned a lack of resources, as well as the difficulty of training and retaining pilots and other airmen.

In Africa, there can’t be a one-size-fits-all model, Miley said.

“The United States has a great deal of experience and expertise to share with our partners, but at the same time, we recognize our model does not fit every location, every need, every budget,” she said.

“Your participation in symposiums like this ... has afforded us the opportunity to improve our overall indications and warnings on the African continent, to improve overall command and control ... and to improve our ability for our warriors to go forward and execute mission command and succeed,” Wolters said.