'Pirates' beware: 31st MEU is ready from sea and sky 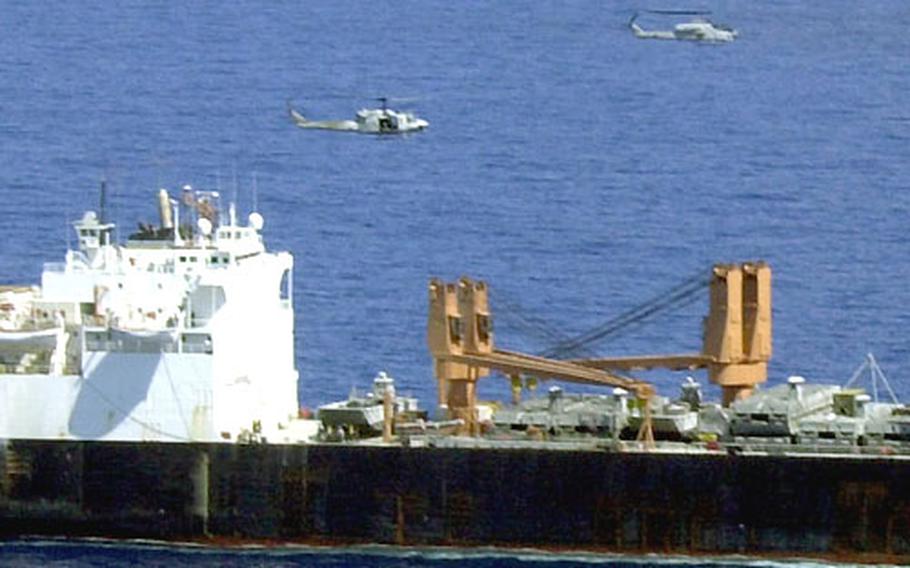 A UH-1 Huey and AH-1 Super Cobra, both from Marine Medium Helicopter Squadron 262, fly off the sides of the SS Maj. Stephen W. Pless, a Military Sealift Command ship, during the training. (Fred Zimmerman / S&S)

A UH-1 Huey and AH-1 Super Cobra, both from Marine Medium Helicopter Squadron 262, fly off the sides of the SS Maj. Stephen W. Pless, a Military Sealift Command ship, during the training. (Fred Zimmerman / S&S) 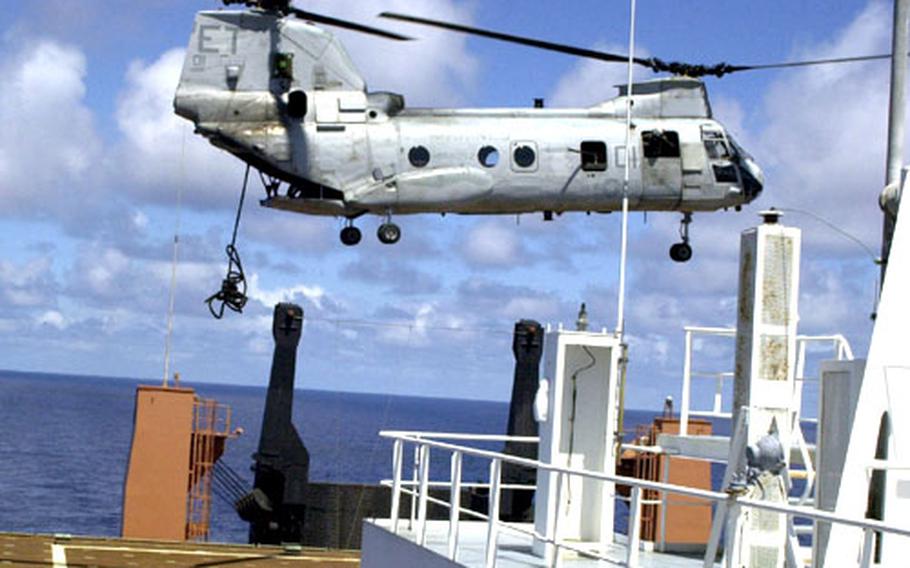 A rope is tossed out the back of a CH-46 Sea Knight helicopter from Marine Medium Helicopter Squadron 262 to simulate Marines fast-roping to the deck of the SS Maj. Stephen W. Pless, a Military Sealift Command ship, during training off the coast of Okinawa on Tuesday. (Fred Zimmerman / S&S)

The VBSS training lets pilots and crews practice how they would place the 31st MEU&#8217;s Maritime Special Purpose Force on a ship, according to Capt. Christopher Horton, a CH-46 pilot with HMM-262. The ship for Tuesday&#8217;s drill was the SS Maj. Stephen W. Pless from the Military Sealift Command.

The Marines perform the mission by a show of force. Tuesday, the Harriers swooped in from above and rushed across the front of the ship at about 1,000 feet. As the jets made their pass, the Super Cobra and Huey charged up beside the ship to show force and provide security. One by one, the CH-46s and lone CH-53 came in and either hovered and dropped a fast-rope or set down on the ship&#8217;s landing pad, simulating dropping off Marines. The Huey, which hovered off the ship&#8217;s side during the drops, acted as a sniper and communications platform. The Super Cobra was there to ensure the intercepted ship&#8217;s crew complies, Horton said.

While the HMM-262 pilots and crews train for VBSS missions, Maj. Todd Ferry said it&#8217;s a rare opportunity to actually train aboard a ship. The CH-46 pilot said much preparation goes into the training, including which airspace each aircraft should operate in and learning the ship&#8217;s layout.

Horton said training with U.S.-operated ships is easy because vessel photos and layouts are easy to obtain. But a real mission could get tricky, he said, because photos could be scarce and not all ships have landing pads.

The helicopters practiced their portion of a VBSS Tuesday. Ferry said Maritime Special Purpose Force members spent three days on the ship last week running through their procedures, complete with countering aggressors on the ship.

Typhoon Khanun&#8217;s recent passage south of Okinawa complicated the training schedule and the two units lacked time to perform the routine together. But the full training should be able to take place in the near future, Ferry added.