At Camp Humphreys, South Korea, firefighters stand near the site of a spill of about 33,000 gallons of fuel oil after a pipe broke Friday morning. (Franklin Fisher / S&S)

At Camp Humphreys, South Korea, firefighters stand near the site of a spill of about 33,000 gallons of fuel oil after a pipe broke Friday morning. (Franklin Fisher / S&S) 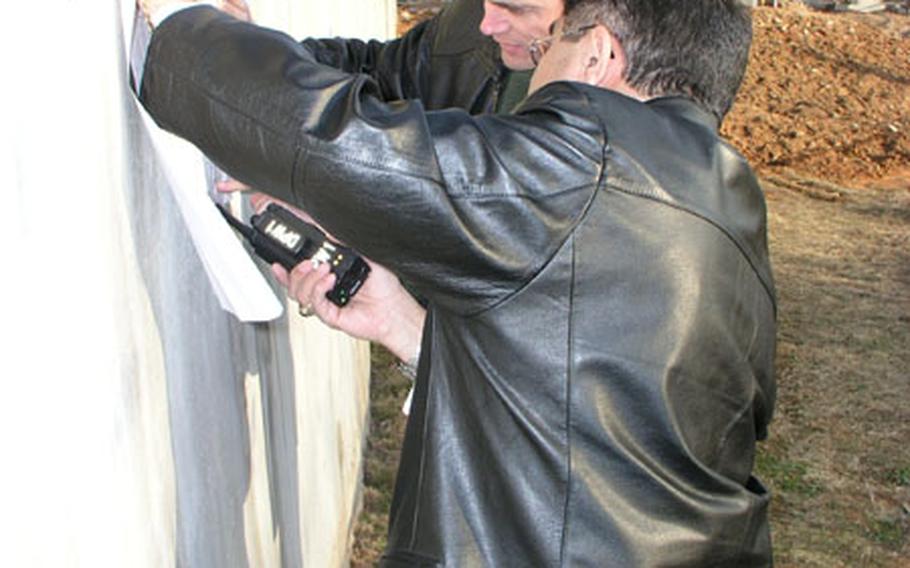 At Camp Humphreys, South Korea, a U.S. Army helicopter base, officials check a map while working to gauge the extent of a fuel-pipe break that released about 33,000 gallons of fuel over swamp-like, broken terrain Friday morning. No injuries were reported in the break, which occurred just behind a helicopter parking apron. With back partly turned toward camera is Camp Humphreys public works chief Bart Mirabel. Beyond him is Mark Hjuler, acting public works chief. (Franklin Fisher / S&S)

No aircraft damage or injuries were reported in the incident, which occurred around 9:10 a.m. The spill was confined to parts of a half-acre parcel on base, which officials cordoned off with yellow tape.

The spill posed no threat to the community outside the installation, according to U.S. military officials, who were working Friday evening to pinpoint exactly which places within that cordoned area contained spilled fuel, how deep into the ground it may have seeped, and other consequences of the break.

The pipe ruptured as a work crew started the transfer of JP-8 aviation fuel from a fuel storage point to a refuel point on the base flight line.

But when they saw the fuel shooting up from underground, workers halted the transfer, called the base fire department, and secured the pipe to prevent further fuel loss, officials said.

Then, through much of a cold, clear day, base officials moved to limit effects of the spill.

And they created a containment basin at one end of the spill site, said Mark Hjuler, also of Humphreys public works department.

Part of that basin included a natural dike that formed during recent rainfall; workers reinforced it Friday afternoon by pouring in additional quantities of dirt, Hjuler said.

Contaminated water that collects in the basin will then be pumped into a tank, Mirabel said.

While clean-up efforts go forward, Camp Humphreys will suspend use of the pipe and rely instead on trucks to transport fuel, Mirabel said.

What caused the break was undetermined as of Friday evening, but officials haven&#8217;t ruled out age.

Camp Humphreys uses the pipe to draw fuel for helicopters and government vehicles, and heating for barracks and other buildings, Mirabel said.

Camp Humphreys is a 1,230-acre installation in Pyongtaek, with about 4,300 troops stationed here. The installation is home to the U.S. Army&#8217;s 6th Cavalry Brigade, and its 23rd Area Support Group.