Pilots to perform flyovers as tribute to fallen 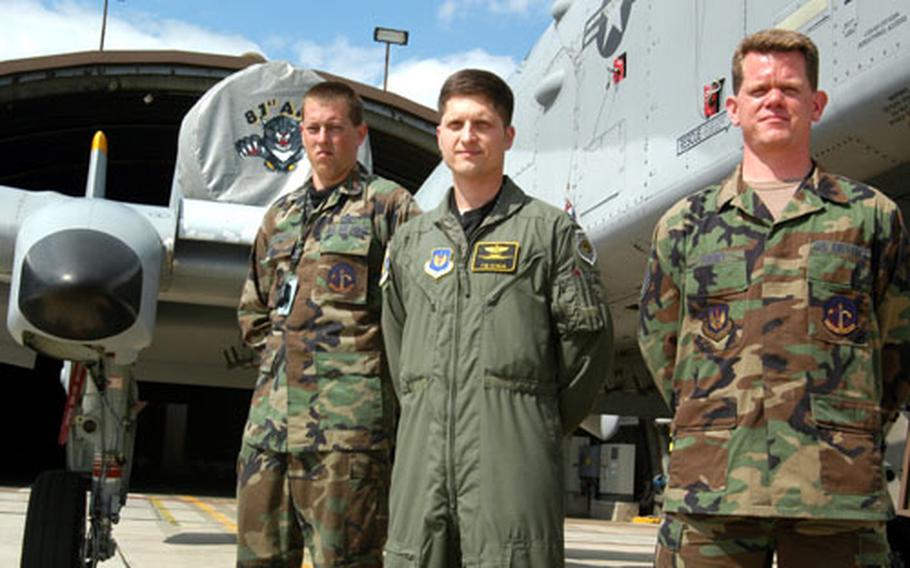 Airman 1st Class Kristopher Woodhull, Capt. Tim Sumja and Sgt. Christopher Haney, left to right, of Spangdahlem&#39;s 81st Fighter Squadron, are among the A-10 squadron members participating in memorial flyovers in France — one on Sunday and one on June 6. (Marni McEntee / S&S)

SPANGDAHLEM, Germany &#8212; It takes only a few seconds for an Air Force jet to roar over a memorial ceremony honoring America&#8217;s fallen warriors.

What most people don&#8217;t realize is that it takes days to prepare for a flyover and up to 30 hard-working airmen to make sure it goes off without a hitch.

In addition to the four pilots who usually put together a &#8220;missing man&#8221; formation, a ground crew must be on hand to inspect the jets each time they land. Crash teams and air traffic controllers also must be ready.

And there is usually a forward air controller at the event that lets the pilots know when it&#8217;s time to make the pass, because they could be 400 miles away waiting for the end of a prayer or the last syllables of a speech on the ground.

&#8220;It&#8217;s a challenge because timing is really tight,&#8221; said Capt. Matt Allen, a 22nd Fighter Squadron F-16 pilot who will fly over services in Luxembourg, France and Belgium this weekend.

Allen and three other pilots in the squadron volunteered to do the flyovers on Memorial Day weekend, which would normally be a holiday for them. Allen said the team has satellite maps to help them know where everything is. They even took a road trip to each site to get a grasp of the history on the ground, which they&#8217;ll see next from up to 3,000 feet in the air.

Six A-10 Thunderbolts from the squadron will be ready to fly over services in France, including an event honoring the 60th anniversary of the Normandy invasion. Four of the jets will be used, and two will be there as backup.

Sgt. Christopher Haney, an A-10 engine maintainer, will be at the site to inspect each plane before every flight.

Capt. Tim Sumja, the lead pilot on one A-10 flyover team, said the Normandy flyby on June 6 will be spectacular &#8212; 40 jets passing over Omaha Beach in four-plane formations.

Sumja, whose grandfather was a pilot for the Royal Air Force in World War II, said the flyovers have a personal resonance.

Several U.S. Air Forces in Europe units are participating in events for Memorial Day and the 60th Anniversary of the Normandy invasion. They include: