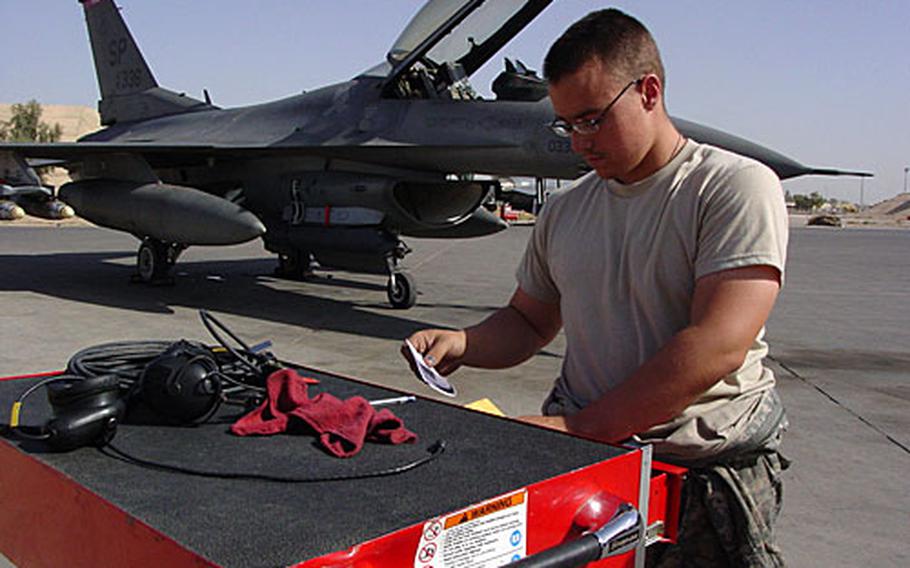 Airman 1st Class Raymond McEuen, a crew chief with the Spangdahlem, Germany-based 22nd Expeditionary Fighter Squadron, straightens out a toolbox at Balad Air Base, Iraq, moments after an F-16 returned from a mission over Iraq. Pilots from Spangdahlem conduct missions over Iraq daily. (Scott Schonauer / S&S)

Airman 1st Class Raymond McEuen, a crew chief with the Spangdahlem, Germany-based 22nd Expeditionary Fighter Squadron, straightens out a toolbox at Balad Air Base, Iraq, moments after an F-16 returned from a mission over Iraq. Pilots from Spangdahlem conduct missions over Iraq daily. (Scott Schonauer / S&S) 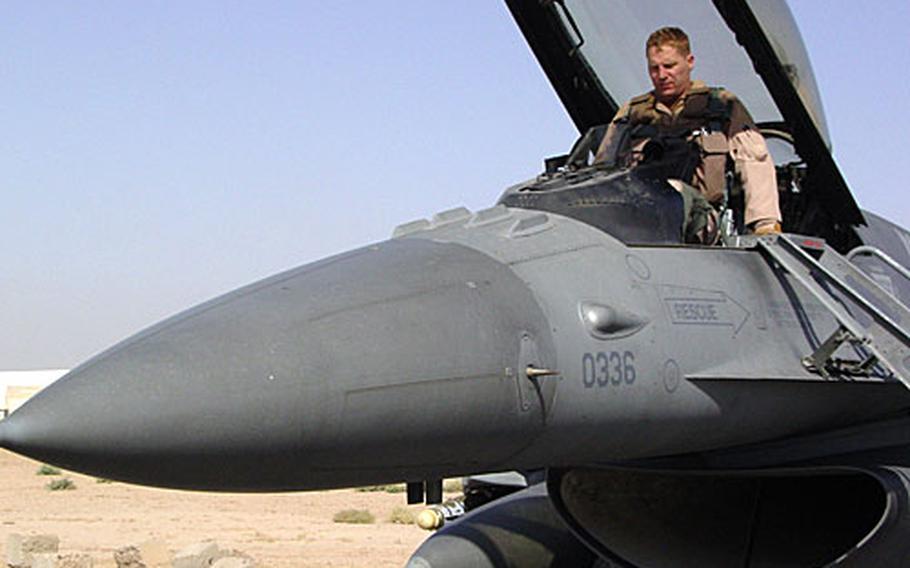 Air Force F-16 squadrons passing through Balad Air Base have used the tall slabs outside their temporary headquarters to tally the number of bombs dropped by pilots over the course of their deployments.

The block for the 22nd Expeditionary Fighter Squadron is bare because it still has another two months left in its Iraq tour. But the unit from Spangdahlem, Germany, is far from matching the totals set by its predecessors this past summer.

While the Air Force has already dropped more than four times as many bombs in Iraq in 2007 as it dropped last year, pilots say that trend has surprisingly changed in the past month. Just as the number of U.S. deaths and insurgent attacks in Iraq have hit new lows for the year, the pilots have noticed a lull in the calls for airstrikes.

The number of airstrikes increased dramatically with the surge in forces in Iraq ordered by President Bush in January.

Coalition forces in the first nine months executed 996 airstrikes, up from 229 last year, according to Air Force statistics provided to Stars and Stripes. The number of strikes reached a peak of 303 in August before dropping to 90 in September. Although the Air Force is still counting the October numbers, pilots said the number has gone down.

The situation is similar in Afghanistan, where a slight drop in the number of bombings followed a huge spike. From January to September, coalition forces launched 2,539 strikes, up from last year&#8217;s 1,770.

It might be too early to read too much into the figures because calls for bombs often go up and down based on the needs on the ground, pilots say. But any drop is good news.

Pilots are not always dropping bombs, but they are always busy. F-16 pilots launching from this base north of Baghdad are focusing on helping detect roadside bombs. Using a camera pod with infrared technology, planes are helping soldiers on the ground unearth the types of explosives that have killed hundreds of troops and crippled convoys.

The planes have also been used as a show of force, streaking over the heads of enemy forces and unleashing flares.

One thing is certain: The drop in airstrikes is not due to the lack of willingness on the part of pilots. They are anxious to help bring some air power to the fight and look forward to adding another mark to the concrete barriers as long as it helps the soldiers on the ground.