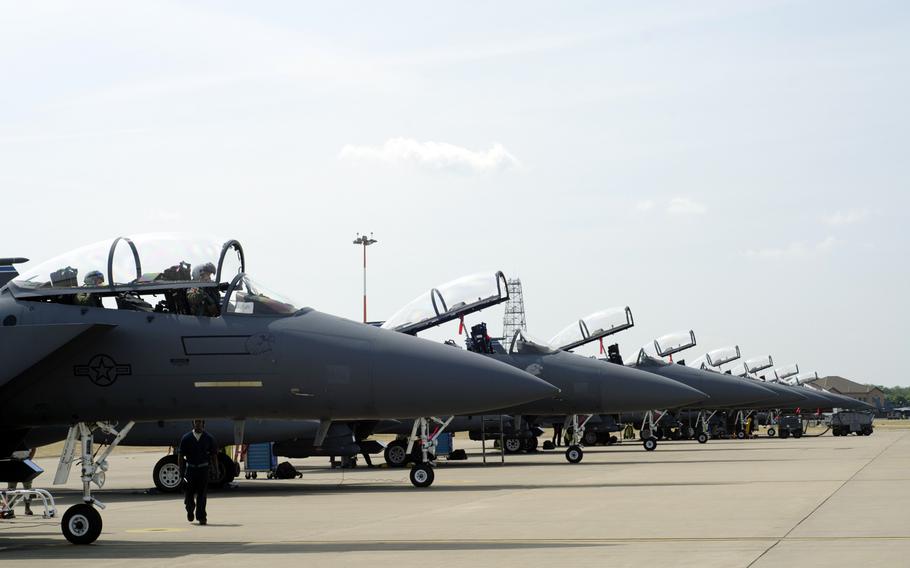 Buy Photo
A pilot prepares to exit an F-15E Strike Eagle at RAF Lakenheath, England, on Tuesday, July 16, 2013, a day after the Air Force lifted budget-mandated grounding of aircraft around the world.The grounding placed some aircraft at Lakenheath at the lowest readiness level. (Adam L. Mathis/Stars and Stripes)

Buy Photo
A pilot prepares to exit an F-15E Strike Eagle at RAF Lakenheath, England, on Tuesday, July 16, 2013, a day after the Air Force lifted budget-mandated grounding of aircraft around the world.The grounding placed some aircraft at Lakenheath at the lowest readiness level. (Adam L. Mathis/Stars and Stripes) 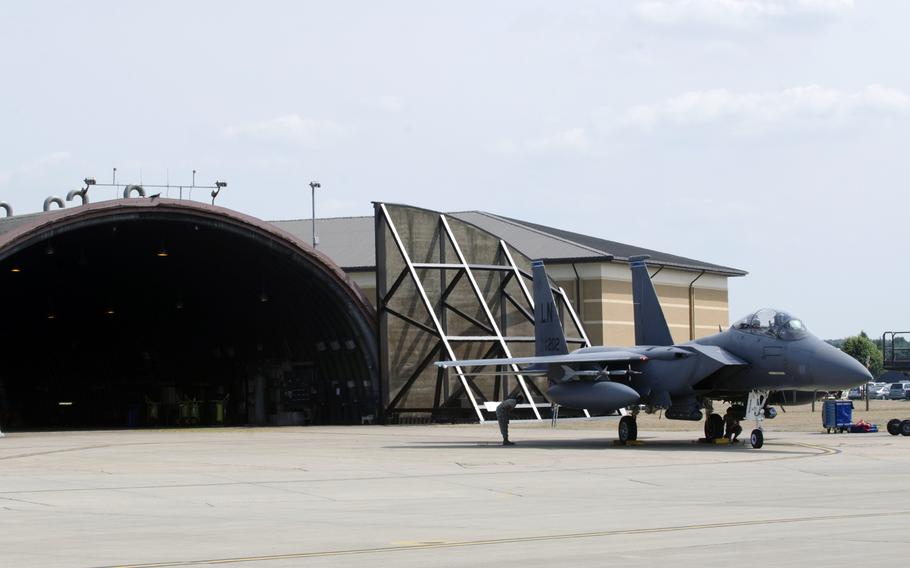 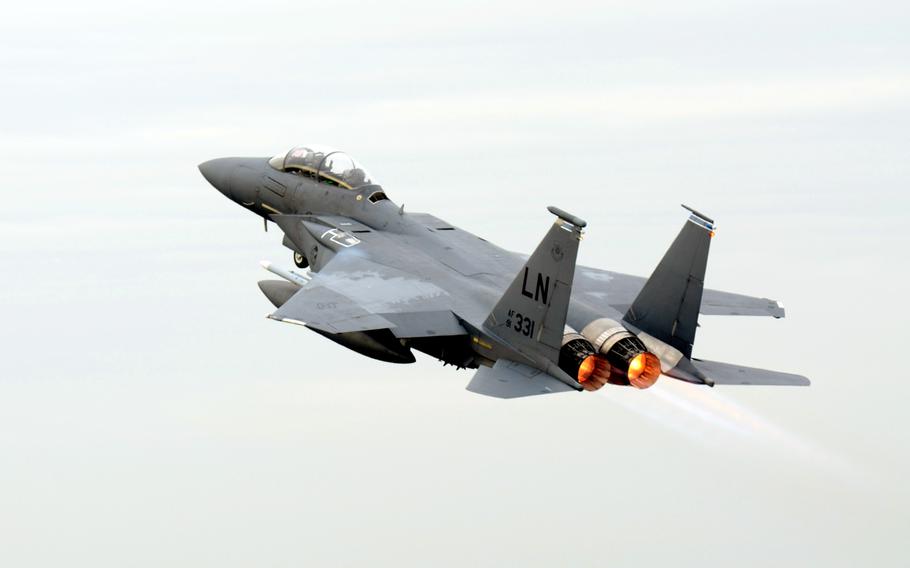 An F-15E Strike Eagle from the 492nd Fighter Squadron taking off Nov. 6, 2012. The Air Force has announced that squadrons that were grounded by budget cuts would resume flying Monday, July 15, 2013. (Staff Sgt. Stephen Linch/U.S. Ai)

KAISERSLAUTERN, Germany — Eager to chip away at the rust, U.S. fighter pilots and aircrews eagerly began returning to European skies this week after more than three months of training in a simulator and studying aviation in books.

Idle jets in the United Kingdom, Italy and Germany received the green light to resume flying after Air Combat Command was able to shift existing funds to restore the Air Force’s flying hour program for the remainder of the fiscal year.

Though welcomed by many, the return to normal flying operations is clouded by uncertainty, the Air Force says, since Congress has yet to pass a Defense spending bill for 2014.

Air Force officials warned this week that if Congress doesn’t act to avoid a further round of automatic budget cuts for the next fiscal year, which begins Oct. 1, the service would have to reduce training across an even wider swath of units, including likely more than half of its combat flying units.

“Budget uncertainty makes it difficult to determine whether we’ll be able to sustain a fully combat-ready force” next fiscal year and beyond, Gen. Mike Hostage, ACC commander, was quoted in a news release this week.

Pilots say they may not reach their former proficiency level before Oct. 1, estimating it could take three months or more, depending on one’s experience and number of opportunities to fly, to master all necessary flight skills and qualifications.

Even with simulator training and extra studying, aircrews who haven’t been flying have “basically atrophied,” said Lt. Col. John Orchard, an F-15E pilot and commander of the 492nd Fighter Squadron at RAF Lakenheath.

There’s no substitute “for getting in a machine and experiencing not only the physical but the mental and all the challenges that come with operating a $54 million beast,” he said.

Flying again after so many idle months is a bit like a marathoner resuming training after a long lull, Orchard said. It’s starting from “ground zero, couch potato mode.”

Orchard said they will recover by practicing how to handle the aircraft and emergencies; flying low, simulate dropping bombs and progressing to more challenging training, he said.

“A day in the summer in England is a precious thing and we need to fly every day we can,” before the dark days and poorer winter weather sets in, Orchard said.

On his first flight Tuesday from the back seat of an F-15E, weapon systems officer Maj. Joel Perlin worked on using the radio and navigation skills, finding he had “rusty habit patterns,” and missed some radio calls.

“Once I get that level of proficiency back again, then I can start thinking about tactics and other things,” said Perlin, assistant director of operations for Lakenheath’s other fighter squadron, the 494th. “It’s one of those careers that is nothing like riding a bicycle; it’s a perishable skill.”

Perlin says he worries more about less experienced pilots, those fresh out of fighter pilot training school “with a very, very basic level of knowledge to begin with and now that knowledge has been … deteriorating” quickly.

Capt. Brandon LaValley, chief of training for the 435th Fighter Training Squadron at Joint Base San Antonio-Randolph, Texas, said pilots need to “quickly and accurately process large amounts of information and translate that into maneuvering their aircraft.

“Flying is so different than anything you do on a day-to-day basis that it requires constant reinforcement of those hand-eye motor skills, sensor managing, and if you’re not doing that on a consistent basis … it’s very easy to get rusty,” he said in an interview this spring.

Grounded squadrons in Europe were the 494th and 555th Fighter squadrons at RAF Lakenheath and Aviano Air Base, Italy, respectively. The 492nd Fighter Squadron at Lakenheath was also idled in April, but about half of the unit’s F-15Es resumed flying in early May after U.S. Air Forces in Europe was able to get some flying hours restored, USAFE officials said.

Squadrons engaged in or preparing for real-world missions were able to continue flying. Those included the 510th Fighter Squadron at Aviano and the 480th Fighter Squadron at Spangdahlem. Six F-16 Fighting Falcons from the 510th are currently participating in a military training initiative in Poland, while most of the 480th’s F-16s are currently deployed to Kandahar. Jets that didn’t deploy and remained at Spangdahlem were grounded but resumed flying this week, said Capt. Mike Hertzog II, a USAFE spokesman.