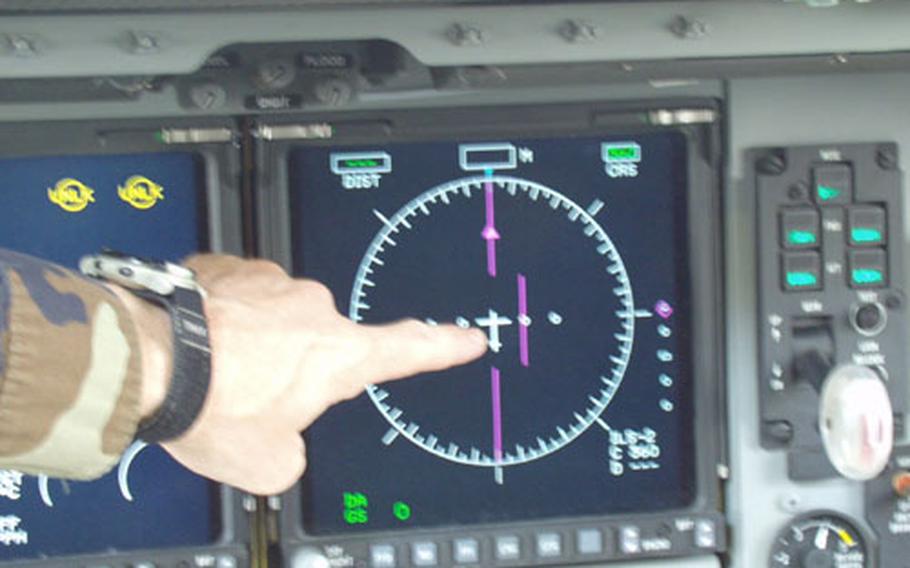 Lt. Col. Michael Polhemus, commander of the 726th Air Mobility Squadron, points out the line pilots must keep straight while flying. When pilots stray too far from course too much noise is heard in surrounding communities. (Jessica Iñigo / S&S)

RHEIN-MAIN AIR BASE, Germany &#8212; Keeping it quiet is nothing more than staying within the lines.

Communities surrounding the world&#8217;s second busiest airport, Frankfurt international, have complained of ear-splitting roars from military aircraft during recent increased operations at Rhein-Main Air Base &#8212; but things have changed.

Now, with cheat sheets in hand and navigational ground guidance, pilots are taking to the sky on course to help keep the noise down. In fact, noise deviance &#8212; the term used when planes fly out of their assigned flight pattern &#8212; is lower than commercial flights, with military planes only going off course 0.3 percent of the time. This was from a high of 6 percent to 7 percent in October 2002.

These flight patterns are imaginary lines in the sky with one primary line down a route of space available for take off. The Air Force only uses about one-tenth of the flight patterns used by the commercial planes, but during increased military operations most of the noise deviation comes from military aircraft when they stray from the lines. The louder noise prompted locals to ask German state officials to do something to help keep it down.

When complaints came in, pilots and air crews were given a crash course in flight patterns and reminded to pay attention to detail.

Lt. Col. Michael Polhemus, commander of the 726th Air Mobility Squadron, took actual maps of flight deviations and used them as learning tools. He showed common error trends on many flight patterns, which include turning too early or too late and overshooting the course.

Many commercial planes are outfitted with low-level Global Positioning Systems, which use automation to keep the plane on course. However, the Air Force only has GPS installed for enroute flights, not takeoffs or landings. Pilots have to manually stay on course with flight patterns given by navigational ground guidance during takeoff, according to Capt. Matt Maloeny, standardization officer for C-17 operations.

Maloeny, along with Polhemus, work with pilots and their crews to determine why a plane went off course to help future flights be on target.

German air traffic controllers provide the most feedback on whether military aircraft are staying on track.

&#8220;This is not about punishment, it&#8217;s about correcting pilot error,&#8221; Polhemus said. He attributes nearly 75 percent of off-course flights to misreading navigation equipment.

Awareness is brought to flight crews with books and briefings. Each air crew is required to read information and maps of common mistakes before flight, and attend lengthier briefings when time is available.

&#8220;Frankfurt has many growing communities, and we have the responsibility to stay within our flying corridors to help keep the noise to a minimum. We have the ability to do this with the great learning tools offered by the Germans and the continued leadership of the C-17 squad,&#8221; Polhemus said.

Books, maps and briefings will help to continue to educate pilots on keeping the engine roar down by staying between the lines.