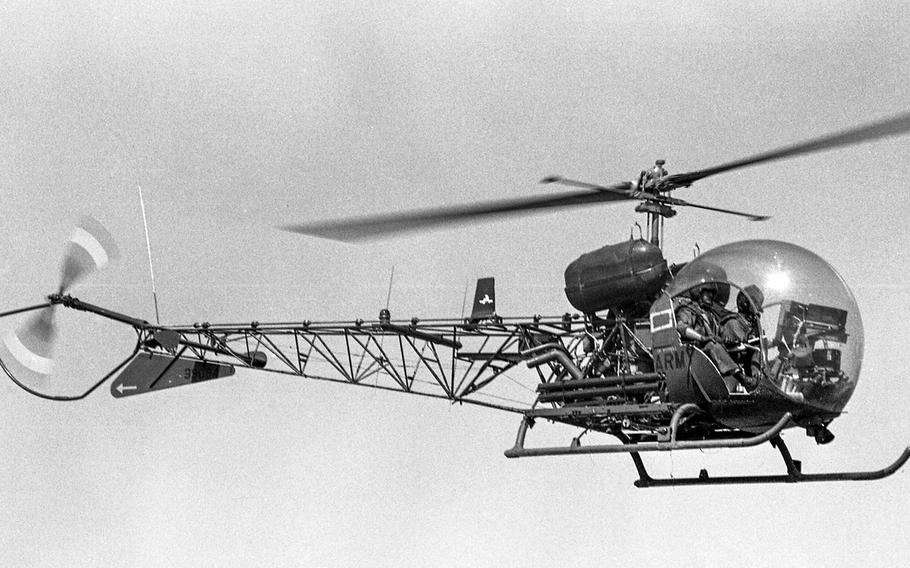 BONG SON, Vietnam ~ They fly at the enemy in plastic bubbles, coming in ''low and slow.''

Scouts are much smaller than Hueys and have only a frame for a tail. The pilot sits in a plastic bubble which gives him maximum visibility as he flies over treetops.

Their main mission is "to go out and find the enemy." They carry either machine guns, which can be aimed only by turning the helicopter, or eight 2.5 rockets.

If the enemy unit is relatively small, or if it is isolated from the center of the fighting forces, men of the "1st of the 9th" swing into action.

Their operation is best described as a small army within the main unit. They have rocket, reconnaissance and lift helicopters. Three platoons, made up of a rifle squad, scout section, mortar section and an anti-tank section, make up what is termed the squadron's "economy of force."

A good example of how effectively the unit was was demonstrated at Pleiku when an armed Huey went down in Viet Cong territory.

When word got back to the camp, a platoon was scrambled and in their helicopter on the way within 4 minutes.

Eleven minutes later they were at the site, had established a perimeter and were evacuating the wounded from the downed Huey.

Twenty minutes later you couldn't tell a chopper had crashed. A flying crane had removed the aircraft, all the injured had been taken out, and the platoon was returning to headquarters to await another mission.