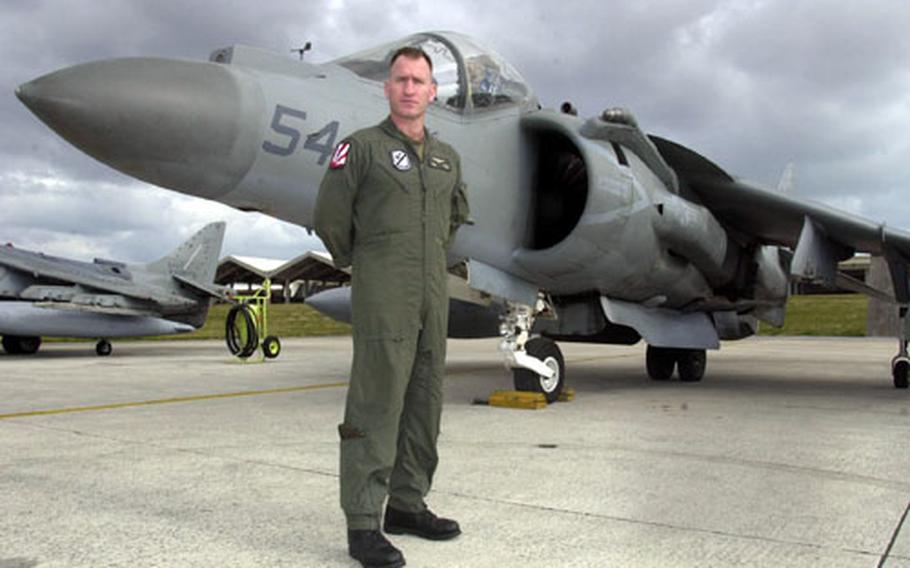 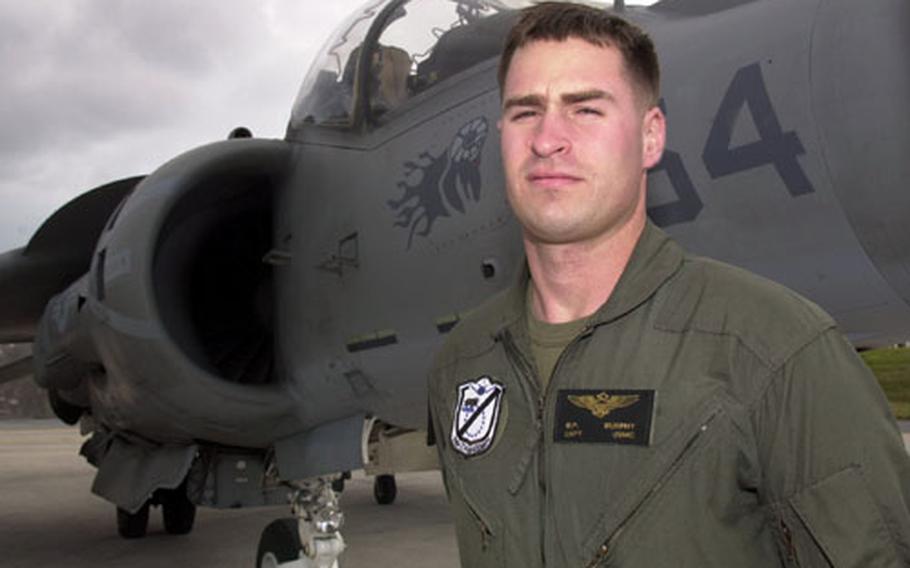 And he&#8217;s done it in a jet that some think is one of the most unsafe airframes in the Defense Department.

But it&#8217;s a jet that&#8217;s been under attack by critics since it debuted in 1983. Its role is different from that of any other aircraft: Harriers deploy on amphibious assault ships and provide ground attack and close-air support for battlefield Marines. Critics blast the Harrier because it&#8217;s not supersonic, it&#8217;s not stealthy and it has limited range. But Kuckuk said those arguments are unfounded.

But Harriers also are similar to other jets, such as the F/A-18 Hornet. Both jets are strike fighters. Both fly bombing missions. Both can conduct air-to-air, armed reconnaissance.

The idea behind the Harrier is to have aircraft on call for ground forces. During the ground phase of the 1991 Persian Gulf War, Harriers operated from forward bases 40 miles from Kuwait&#8217;s border, much closer than other allied jets. Eighty-six Harriers flew 3,380 sorties. Turnaround time for refueling and rearming averaged only 23 minutes.

Kuckuk rebuffed criticisms of the Harrier that it flies too slowly for the modern battlefield or consumes too much fuel.

The Harrier&#8217;s limitations are not of the basic design, but of leaps in technology.

Harriers also have been upgraded with Lightning II targeting pods, allowing them to drop laser-guided bombs. It was the lack of this capability that kept Harriers out of the air war over Bosnia.

Critics say 42 Marines have been killed in Harrier crashes since the AV-8B arrived in the Corps. They say the vertical/short take-off tactics have the Harrier flying on one engine, while every other naval jet flies on two. But Kuckuk said that criticism, too, is inaccurate. While Harriers suffered three crashes in 2002, six Hornets have crashed since last October 2002, Kuckuk said.

&#8220;The engine itself is relatively failure-free until we do something to cause it to malfunction. The fact is, this is a dangerous business,&#8221; he said. &#8220;Sometimes people die doing this. Sometimes people die going to work, or flying Hornets or F-16s.&#8221;

Kuckuk said mishaps are measured in the number that happen per 100,000 flight hours. But Harriers fly many short missions &#8212; lasting an hour to 1&#189; hours, meaning Harriers log more flight missions with shorter hours than do other aircraft. Other aircraft might fly longer missions &#8212; four or five hours &#8212; meaning they&#8217;ll fly fewer missions for the same amount of hours.

Kuckuk doesn&#8217;t deny the Harrier has had its share of problems. The Harrier was grounded for a year in July 2000 after a faulty engine bearing was cited as the cause of a crash. That led to a whirlwind of changes, including more frequent short-range groundings.

Marines embraced operational-risk management, a system championed by the Air Force to recognize and solve problems. Simulators were improved and pilot training standards were raised.

&#8220;We monitor the health of our engines better than any community in any service,&#8221; Kuckuk said. &#8220;There was one instance where we found a problem on one of our jets and grounded the entire fleet to look for the same problem. We found it on one other plane. What&#8217;s wrong with that? I think it&#8217;s better we found it and fixed it before we had another jet crash.&#8221;

Capt. Michael Murphy, one of the Black Sheep&#8217;s newer fliers, pointed to the unique role the Harrier fills while deployed with Marines on ship. While Hornets deploy on aircraft carriers, Harriers are on the same ship as the infantry.

In the future, short take off and vertical landing planes likely still will be a large part of Marine aviation. The Joint Strike Fighter for the Marine Corps is being designed to take off and land just like today&#8217;s Harrier.

Armament: Seven external store stations, comprising six wing stations for AIM-9 Sidewinder and an assortment of air-to-ground weapons, external fuel tanks and AGM-65 Maverick missiles; one centerline station for DECM pod or air-to-ground ordnance. A GAU-12 25 mm six-barrel gun pod can be mounted on the centerline and has a 300 round capacity with a lead computing optical sight system (LCOSS) gunsight.

Mission: The mission of the VMA STOVL squadron is to attack and destroy surface and air targets, to escort helicopters, and to conduct other such air operations as may be directed. Specific tasks of the AV-8B Harrier II include:

&#8226; Conduct offensive and defensive anti-air warfare. This includes combat air patrol, armed escort missions, and offensive missions against enemy ground-to-air defenses, all within the capabilities of the aircraft.

&#8226; Be able to operate and deliver ordnance at night and to operate under instrument flight conditions.

&#8226; Be able to deploy for extended operations employing aerial refueling.

&#8226; Be able to deploy to and operate from carriers and other suitable seagoing platforms, advanced bases, expeditionary airfields and remote tactical landing sites.

Features: The AV-8B V/STOL strike aircraft was designed to replace the AV-8A and the A-4M light attack aircraft. The Marine Corps requirement for a V/STOL light attack force has been well documented since the late 1950&#39;s. Combining tactical mobility, responsiveness, reduced operating cost and basing flexibility, both afloat and ashore, V/STOL aircraft are particularly well-suited to the special combat and expeditionary requirements of the Marine Corps. The AV-8BII+ features the APG-65 Radar common to the F/A-18, as well as all previous systems and features common to the AV-8BII.

Inventory: 7 squadrons with 20 aircraft each and 1 training squadron with 20 AV-8B and 15 TAV-8B aircraft for a total 175 aircraft.