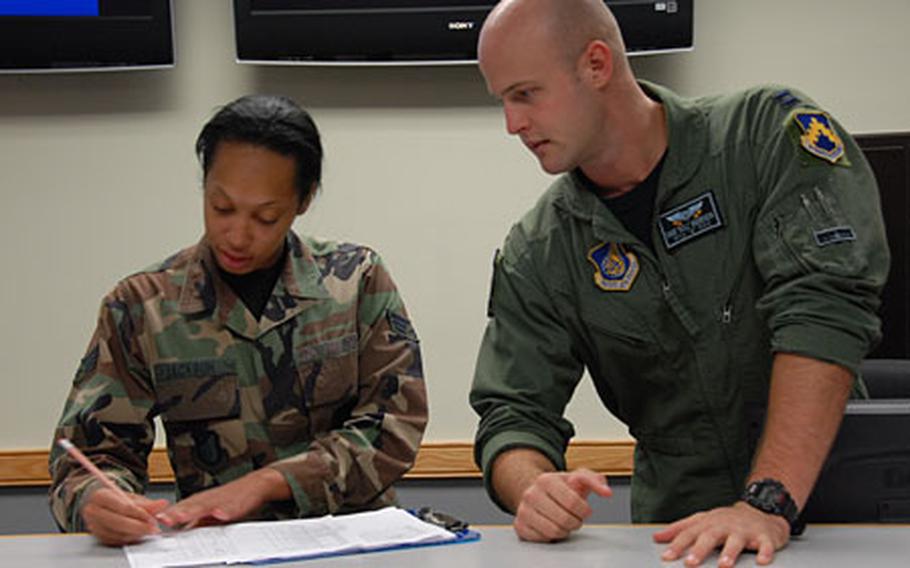 When he arrived 10 minutes later, he found a patrol of Americans had been pinned down beside a footbridge on a canal south of Baghdad, ambushed and trapped by insurgents.

&#8220;The radio just exploded with them screaming,&#8221; said Anderson, 29, who would earn the Distinguished Flying Cross for his actions in the ensuing moments. &#8220;You could hear the weapons firing in the background and the guys yelling.&#8221;

Halfway through his five-month deployment to Iraq last year, most of Anderson&#8217;s missions had involved flying over the routes convoys would take, looking for roadside bombs or watching suspected insurgents&#8217; houses.

During those five months, he would get 13 calls to help troops being attacked by insurgents. Twelve times, the sound of his jet flying overhead was enough to scare away the enemy. But this time, the attack didn&#8217;t stop when he flew overhead. Anderson would have to fire his weapons, even though the Americans were only about 50 meters away from the insurgents.

It would be his first time using his weapons in combat.

Because they were so close, Anderson had to use the jet&#8217;s 20 mm cannon instead of a high-explosive bomb. Still, firing the cannon was risky: The range of safety for Anderson&#8217;s gun was 125 meters, and the U.S. troops were well within that zone.

Anderson flew over the canal once and then again. When he opened fire, the Americans were showered with dirt and debris because they were so close to the impact of the 20 mm rounds.

The soldiers threw their last smoke grenade to mark their position, so Anderson wouldn&#8217;t accidentally hit them. On his third strafing run, Anderson used the last of his ammunition.

That final run killed or ran off the rest of the enemy. American troops found six insurgents who were killed by Anderson&#8217;s gunfire and two others who died from shots fired by troops on the ground.

Anderson was awarded the Distinguished Flying Cross last month but said he was just in the right place at the right time.