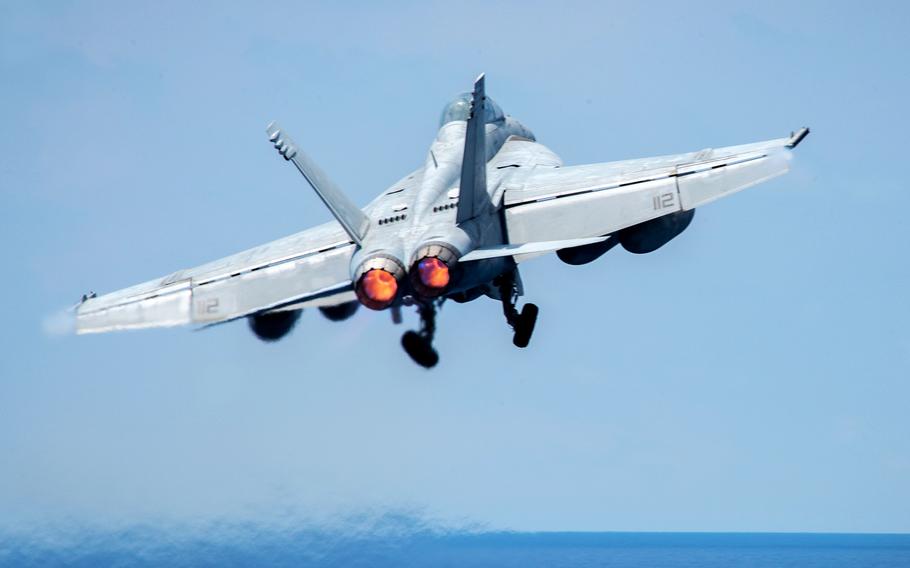 An F/A-18 Super Hornet from the Strike Fighter Squadron 2 launches from the aircraft carrier USS Carl Vinson (CVN 70) flight deck on April 10, 2017. Boeing was cited by the Pentagon for continuing quality, management and other deficiencies first issued more than two years ago, including problems related to production of its flagship F/A-18 and F-15 jets, according to documents and officials. (Jake Cannady/U.S. Navy photo)

Navy pilots would rather have more time in the cockpit than cash bonuses designed to keep them in uniform, according to the chief of naval personnel.

Feedback from the fleet shows that not enough flight time, lack of warfighting focus and poor work-life balance are the three biggest reasons why aviators leave the service, Vice Adm. Robert Burke wrote in the March issue of the U.S. Naval Institute’s Proceedings Magazine.

The Navy is short of strike fighter, electronic attack and helicopter mine countermeasure pilots, Burke told the Senate Armed Services Committee in February. The service is offering some aviators up to $175,000 to stay; however, Burke believes it will take more than that to solve retention issues.

“Money was not the primary driver for most aviators to leave,” Burke wrote in an article titled, “We are on the Road to Aviation Retention.” It responded to claims that the Navy lacked foresight and funding to stop pilots from leaving for lucrative commercial aviation jobs.

“Pilots want to spend more time in the cockpit, and increased numbers of ready aircraft are now beginning to provide more flight time and improve fleet readiness,” he added.

Commanders are working to reduce the time pilots spend on paperwork and inspections that cut into flight time. Meanwhile, the Navy has implemented a “Career Intermission Program” that allows sailors to take up to a three-year break to pursue personal interests, Burke wrote.

Retention of strike fighter, electronic attack and helicopter mine countermeasures pilots must increase significantly over the next several years to meet requirements, Lt. Cmdr. Leslie Hubbell, a Pacific Fleet spokeswoman, said in a statement last week.

“The Navy is closely monitoring the effect that our package of monetary and nonmonetary incentives are having to address the shortfalls,” she said. “We will not speculate on a timeline, but we are optimistic that our measured and deliberate approach will address this issue.”