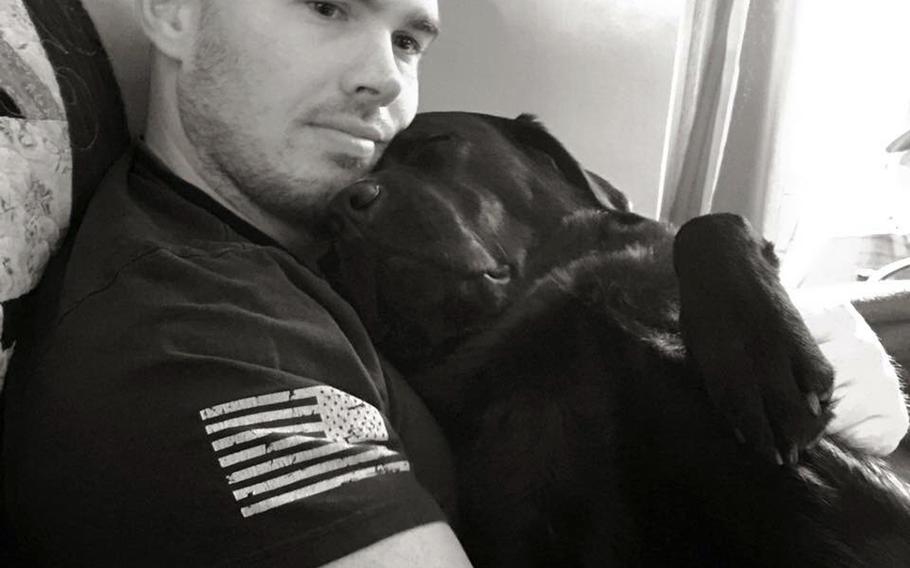 Caleb Davisson cuddles with his service dog, Velvet. The former Marine was paired with one of the first dogs trained for Veterans Affairs' PTSD study at Canine Companions for Independence. (Courtesy of Caleb Davisson)

The Department of Veterans Affairs is studying how service dogs might be able to help veterans with post-traumatic stress disorder. Though the results are years away, a group helping with that research isn’t waiting to pair its pups with servicemembers.

Canine Companions for Independence Inc. — a nonprofit in Santa Rosa, Calif., that’s been providing service dogs for people with physical disabilities since 1975 — is preparing to launch a pilot program that will train and pair dogs with veterans with PTSD based on a curriculum developed for the VA study.

PTSD is an anxiety disorder caused by the psychological wounds of war and traumatic experiences. Symptoms include anger, paranoia, anxiety and withdrawal from society.

CCI aims to begin pairing dogs with veterans by the middle of this year, with up to 20 placements by mid-2019, said instructor Sarah Birman.

“This is the first time — aside from the VA study — that we will be training dogs in specific skills that are designed to address the symptoms of PTSD,” she said. “As we’ve worked with veterans with PTSD through the VA study, we’ve had the opportunity to really get to know them, hear some really incredible stories of the ways in which the dogs have helped them.”

For its pilot program, CCI is accepting veterans who live within 90 miles of its Santa Rosa campus, but hopes to expand nationwide over the next few years.

Service dogs have been used for years to benefit those with physical disabilities; however; there is no scientific literature that says the animals are equally beneficial to those with PTSD. A 2011 attempt to study the issue was scuttled because of dog bites and was later canceled over concerns about the animals’ health and training.

At the end of 2014, the VA kicked off the current study, which it says is more comprehensive and more tightly controlled, with new partners, including Canine Companions.

The most recent group of participants received their dogs in December, Birman said. After 18 months, the VA will compile and publish the results.

Birman said CCI has confidence in the protocols and training techniques, and believe that it will benefit some veterans.

“We believe that dogs can be trained in tasks that can help mitigate aspects of PTSD and help someone in their process of recovery along with other resources that exist already,” she said.

“I was having all of the typical symptoms,” he recently told Stars and Stripes. “I was scared to go out in public because I might be around a lot of people. I was depressed. I was withdrawn from everything, basically; hypervigilant all the time.”

Davisson said his marriage fell apart and things began to look dire before he decided to seek help. In 2012, he got out of the Marines and headed back to Iowa to live with family. He sought treatment for PTSD through the VA. That’s where he learned about the study.

Davisson fit the criteria, and in the summer of 2015 moved to Santa Rosa to work with Birman and CCI. He was paired with one of the first dogs trained by CCI for the VA study, a black English Labrador named Velvet.

Velvet knows about 20 commands, said Davisson, who uses “block” and “behind” the most. When he delivers those commands, Velvet acts as a barrier in front or behind him in a crowded public setting, ensuring that people don’t get too close. She also knows how to turn on lights before Davisson enters a room and can clear a room of people before he enters, barking three times if she spots someone.

Velvet “helped me out more than I ever thought she would, just by the commands she performs,” Davisson said. “But honestly, aside from the fact that she is a service dog and she’s trained to go out in public and all of that, I think just the companionship itself has been the most beneficial out of everything, just having her there all the time and unconditional love.”

Davisson said Velvet’s help has been immeasurable, because she forces him to take responsibility for her well-being – to get out of bed, to walk and feed her. She protects him from PTSD triggers and has given him the confidence to go to school and get his bachelor’s degree in construction management. He has developed ambitious business plans and has started a family.

Another tool CCI’s program will start with about five local veterans, whose dogs will be selected based on temperament, energy levels, confidence and reactions to stimuli, Birman said. For example, they are looking for dogs with a high level of confidence, those that interact or snuggle with their handler, those attuned to their handler’s emotional state and are not reactive to loud sounds.

CCI officials will be looking to fine-tune all of their processes, from application procedures to pairing and training handlers and their new furry companions – and to fit the new program into its existing model. It will expand to about 20 placements during the first year.

There will be frequent follow-up meetings to determine how the veterans are benefitting from the dogs and to see whether there are any unforeseen benefits.

If all goes well, CCI could start admitting police, fire and emergency medical personnel to the program, Birman said. It could also start rolling out the program in regional centers in the next few years. The group has also been fundraising to open a PTSD-dedicated building on its campus.

“We’ve had the opportunity to learn a great deal through the screening process, the placement process, of course the training process with the dogs and also the team-training with veterans with PTSD, and we feel now, as the VA study is wrapping up, we feel like we’d like to carry that momentum forward,” Birman said.

“Service dogs are another tool that is available to veterans,” she said. “I think the more options that we make available to people the more people will be able to hopefully find something that works for them. PTSD can be an incredibly debilitating condition and really tremendously isolating, and so, if through these dogs we can make a difference in the lives of even just a handful of veterans, then it will absolutely have been worth it.”

Davisson said he plans to continue working with and supporting CCI. He is excited for other veterans with PTSD who might get a chance to enter the program.

“I’ve had the best experience with Canine Companions for Independence,” he said. “They make some awesome dogs. [Velvet] is perfectly docile; perfect behavior. She never makes any mistakes. She’s just phenomenal … I wholeheartedly believe veterans will benefit from these dogs, without a doubt.”