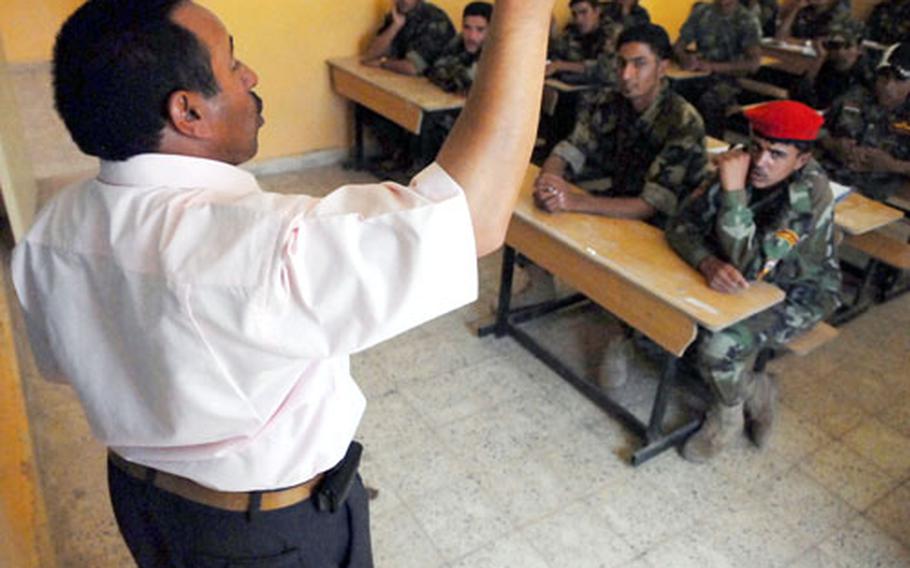 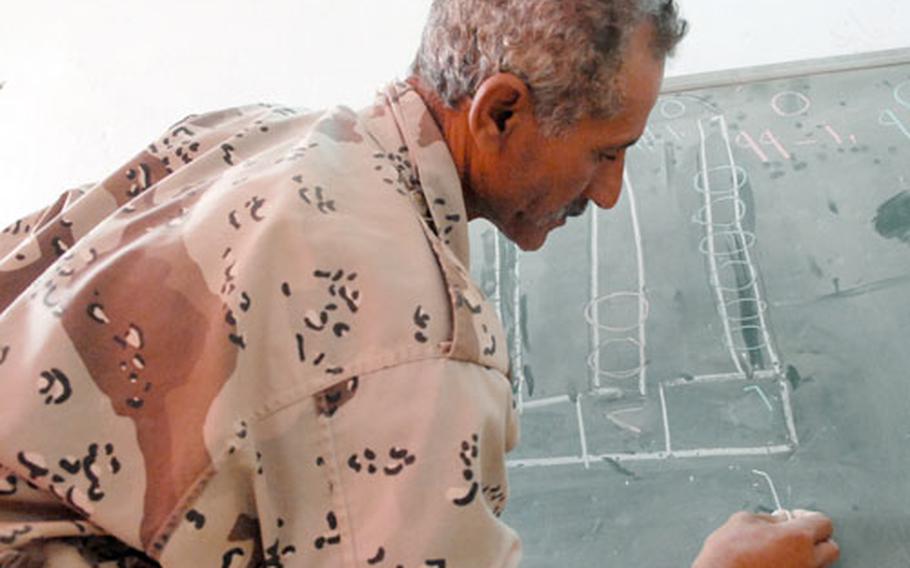 Nawer Majid Wesmi, a Riyadh “Sons of Iraq” member, writes numbers on a blackboard during a writing exercise Wednesday at a classroom in the Iraqi city. Asked for his name, Wesmi picked up a piece of chalk and wrote it in Arabic. (James Warden / S&S) A teacher in the National Literacy Pilot Program holds one of the textbooks used to teach “Sons of Iraq” members to read and write. (James Warden / S&S)

HAWIJAH, Iraq &#8212; Raad Hussein, a 16-year-old "Sons of Iraq" security volunteer from Qabzoah, a village in the largely agricultural Hawijah district just west of Kirkuk, dropped out of school when he failed the third grade. Not surprisingly, he can barely read.

"Because of the demands of the lifestyle, we had to go out into the field," he explained.

Hussein&#8217;s job prospects would be slim without the "Sons of Iraq," but that program is drawing down. A new reading and writing program that he joined after the program&#8217;s official opening celebration Saturday could help his job prospects, though.

"Sons of Iraq" is a U.S.-funded program that pays armed civilians to man checkpoints along key roads in their areas. Commanders credit the group with security gains across the country, but transitioning "Sons of Iraq" members to long-term jobs will be crucial to maintaining that security. Many of the volunteers had been so-called economic insurgents &#8212; desperately poor residents who planted bombs and attacked coalition forces only because insurgent leaders paid them to do so.

Leaders have been busy working to find new jobs for these men so they don&#8217;t revert to taking money from foreign fighters. Yet many in the program, especially in rural areas, don&#8217;t have the education to land other jobs. Commanders in other parts of Iraq estimate that as many as two-thirds of the volunteers aren&#8217;t eligible to join the Iraqi Army or Iraqi police, both of which require basic literacy.

The National Literacy Pilot Program aims to bridge that gap. It&#8217;s teaching reading and writing to 500 "Sons of Iraq" members around the Hawijah area from June 15 to Oct. 15. The students continue to receive their "Sons of Iraq" salaries while they attend class.

Planners hope to expand the pilot into a nationwide program if the first session goes well. They are already looking at opening it up to 2,000 students in the first expansion, said Lt. Steven Johnson, a civil affairs team chief with Company A, 443rd Civil Affairs Battalion.

Teachers in the program have been handpicked. Hassen Ibrahim Mahmood, for example, brings 19 years of teaching experience to his Hawijah classroom. By trade a first grade teacher, he teaches students ranging from teen-age to middle age, although most are young.

"I expect that he [the student] will learn a lot," Mahmood said. "Because they have the ability to learn, they will be better than third grade [by the end of the program]."

Some students aren&#8217;t attending class regularly, however. Khalaf Ibrahim Ali, a "Sons of Iraq" commander, said on any given day, an average of six or seven students in a class of about 50 were absent. Students are only allowed to have four absences during the entire program, and teachers have already kicked out four for skipping class. Lt. Col. Chris Vanek, the U.S. commander in the Hawijah district, told Iraqi leaders to make sure their men got to class.

"It&#8217;s very critical, especially with this pilot program, that everybody attends," said Vanek, the commander of 1st Battalion, 87th Infantry Regiment. "It&#8217;s critical because everybody&#8217;s watching this program &#8212; everyone in Iraq. If we blow it, we blow it for all of Iraq."

But most of the students are excited about learning to read and write. Maher Kais has been in the program since it began June 15. The 18-year-old never went to school and could not read and write at all. But he&#8217;s proud that he can write his name, father&#8217;s name and grandfather&#8217;s name &#8212; the Iraqi version of a full name &#8212; after just three weeks in class. He&#8217;s looking forward to the time when his skills are fully developed.

"It will give me a great confidence in myself, trying to improve myself and get a different job," Kais said.