Pilot is first to return to Misawa from Iraq 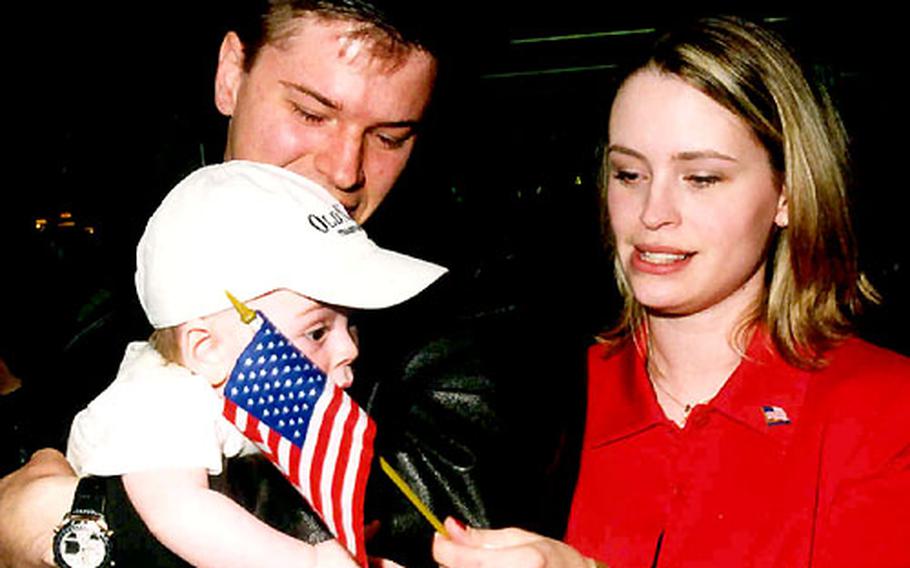 After being greeted by his wife, Capt. Jennifer Tittel of the 35th Communications Squadron, Capt. Steve Tittel holds his 6½-month-old son, John, for the first time since his deployment to Southwest Asia in December. (Renee Ekman / USAF)

A 35th Fighter Wing pilot is the first airman to have returned to Misawa Air Base from Operation Iraqi Freedom.

Monday, F-16 pilot Capt. Steve Tittel, from the 14th Fighter Squadron, kissed his wife and held his 6-month-old son, John, or the first time since Dec. 2.

The 30-year-old pilot returned from the war early, after being accepted to the F-16 Weapons School at Nellis Air Force Base, Nev.

He&#8217;ll remain in Misawa for three months of pre-flight school training, then leave for six months in Nevada.

At least there his wife, Capt. Jennifer Tittel with the 35th communications squadron, will be able to visit.

Deployments have separated the Tittels in the past but this was the first one involving a newborn.

John has rolled over, sat up, begun laughing and gumming solid foods while his dad was away.

Jennifer e-mailed photos to Steve every other day to show their son&#8217;s growth since December.

Tittel applied for the flight school in January and learned he was accepted in March. At the time, Jennifer knew her husband could be home soon.

It wasn&#8217;t until last week the Tittels knew they soon would be reunited. Still, Tittel said, he couldn&#8217;t let himself think about the future until his flight operations were complete.

More than 500 airmen from the fighter wing are deployed in support of Operation Iraqi Freedom. His deployed conditions were livable but the tasks never were easy.

The weapons school is aimed at honing Tittel&#8217;s flying and fighter skills. It can mean a whole new set of opportunities in the future, he said.