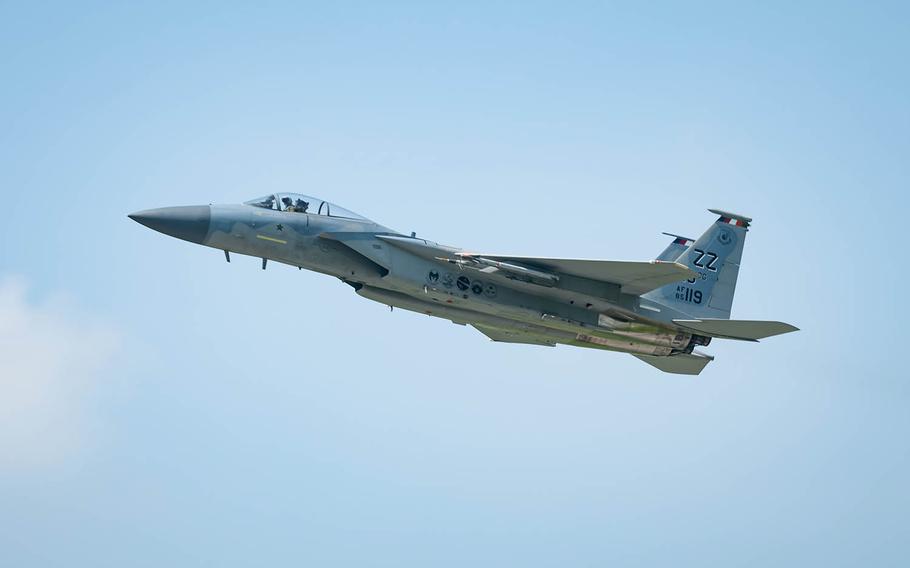 CAMP FOSTER, Okinawa — Pilot error was to blame for the F-15C Eagle crash into the ocean south of Okinawa in June that left an Air Force pilot in serious condition and led to a temporary pause in training, according to reports released this week by the U.S. military and Japanese government.

“This accident happened because the pilot was spatially disoriented and made a wrong decision to gain back control of the aircraft and ultimately it led to losing control,” the Japan Ministry of Defense wrote in its report, which was released Wednesday. “No mechanical errors were found in the F-15C.”

The incident occurred at 6:17 a.m. local time June 11 approximately 70 miles south of Kadena Air Base during a simulated dogfight between F-15C Eagles from Kadena’s 44th Fighter Squadron and F-22 Raptors on deployment to Japan from Joint Base Elmendorf-Richardson’s 525th Fighter Squadron, according to a report released Tuesday by Pacific Air Forces.

The Eagle pilot became disoriented while tracking a Raptor and flew vertically, thinking it was a right-hand turn, the Air Force report said. Speed decreased and the nose started to drop. The aircraft may have stalled.

The pilot was unable to recover the aircraft.

“I find by a preponderance of the evidence the mishap was caused by the [pilot’s] improper application of forward stick with full right rudder,” Air Force Col. Harmon Lewis Jr., the accident investigation board president, wrote in the report’s conclusion.

“Furthermore, I find by a preponderance of the evidence that three additional factors substantially contributed to the mishap: spatial disorientation, lack of emergency procedure training for negative G departures from controlled flight, and limited time to analyze the situation and recover.”

After losing control, the Eagle pilot tried to eject as the fighter dropped toward the ocean but first tried to pull the wrong handle, the report said. The pilot then ejected at 1,100 feet, nearly 5,000 feet below the minimum altitude for safe emergency escape.

It took 15 seconds from the time the pilot lost control to ejection, the report said.

The pilot suffered a broken leg and hand but was rescued by the crew of a Japan Air Self-Defense Force helicopter, the report said. The pilot was taken to U.S. Naval Hospital Okinawa for treatment.

As of December, the pilot was still rehabilitating from injuries sustained in the crash, the Air Force report said. There were no fatalities or property damage due to the crash. However, the Air Force lost one of its legacy air superiority fighters at a cost of approximately $42.3 million.

The U.S. military plans to strengthen pilot training by adding more exercises based on F-15C features and to re-examine training regulations, the Japanese report states.

“We are truly grateful to the Japan Air Self-Defense Force rescue team for their help in saving our pilot,” the 18th Wing’s media section said in a statement regarding the report Thursday. “Safety of local residents is a priority, which is why the majority of our flying training operations are conducted over water.”

Kadena temporarily paused F-15 training in the wake of the incident so the 18th Wing could review “operational, maintenance and safety procedures,” officials previously told Stars and Stripes.

At the time, Japanese officials criticized the United States for too many aircraft mishaps. Then-Defense Minister Itsunori Onodera called on the U.S. military to ensure the safety of its aircraft and prevent future occurrences.

Okinawan prefectural officials lodged a formal protest. They declined to comment on the report Thursday.

An F-15 also crashed into the sea off Okinawa in May 2013 due to a failure in the aircraft’s hydro-mechanical flight control system. A Japanese military search-and-rescue team recovered the pilot in that case as well. The pilot was listed in stable condition following rescue.