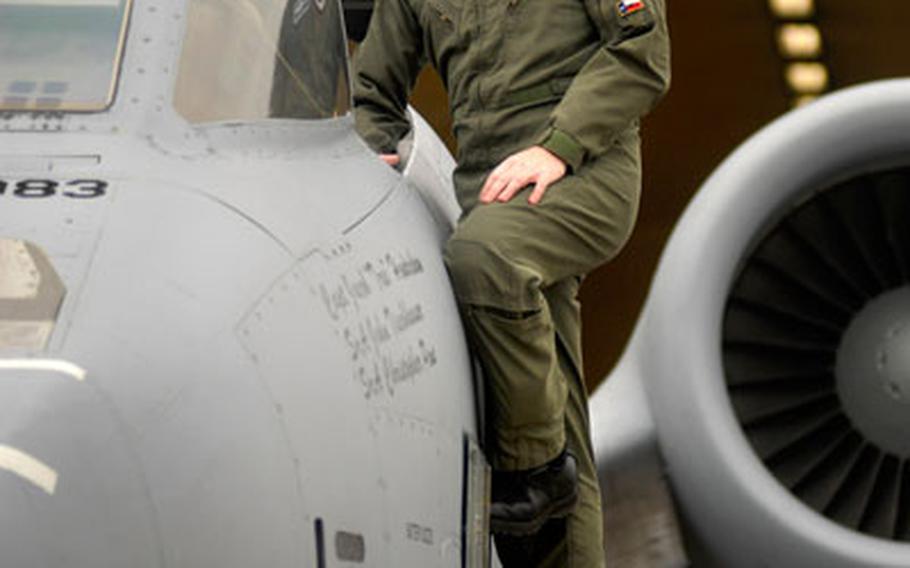 Capt. Scott Markle, a fighter pilot assigned to the 81st Fighter Squadron, poses by an A-10 at Spangdahlem Air Base, Germany. Last month, Markle was awarded the Mackay Trophy for the "most meritorious flight of the year" when he engaged a group of Taliban fighters battling a Special Forces team on the Afghanistan-Pakistan border. (Ben Bloker / S&S)

Of the 60 flights Air Force Capt. Scott Markle made in Afghanistan during 2006, only one got delayed.

Mechanics quickly fixed the glitch responsible for the setback. It ultimately allowed Markle and his wingman, Capt. David Kirkendall, to answer an urgent call from Special Forces soldiers near the Pakistani border that day in late June.

Had they not been delayed, the two A-10 pilots &#8212; from the 81st Fighter Squadron out of Spangdahlem Air Base, Germany &#8212; would have flown west to Kandahar and been unable to help the 15 Special Forces troops under heavy attack from an estimated 100 Taliban fighters.

The mission earned Markle the prestigious Mackay Trophy, which was presented to him at a ceremony in Washington last month.

The Air Force and National Aeronautic Association present the award to airmen or an organization involved in the &#8220;most meritorious flight of the year.&#8221; The trophy was first awarded in 1911 and is on display at the Smithsonian National Air and Space Museum in Washington.

The ceremony, at which astronauts, distinguished servicemembers and world-famous aviators also were recognized &#8220;was quite the event,&#8221; Markle said.

&#8220;My story was nothing compared to some of these stories I heard from Vietnam and the Medal of Honor winners,&#8221; said Markle, who attended the event with his mom and dad, a retired Air Force lieutenant colonel.

The trophy is worth more than $1 million and is &#8220;taller than me. ... It looks like the Stanley Cup,&#8221; said Markle, whose mother insisted on getting a picture of him in front of it at the museum.

But for Markle, what was most rewarding came just after his now-celebrated mission in Afghanistan, when he met up with the Special Forces soldiers who thanked him for the air support he provided that day.

After Markle began releasing self-protection flares at 300 feet, the sky lit up with a firework-like glow and filled with red smoke. It gave the 15 guys on the ground, some of them injured, a distraction to distance themselves from the 100 or so Taliban forces.

And neither was he.

On the radio with the troops on the ground, Markle was able to take out several enemy machine-gun nests, shooting 1,000 rounds and dropping two 500-pound airburst bombs with the help of his wingman. About 40 Taliban were killed in the fight.