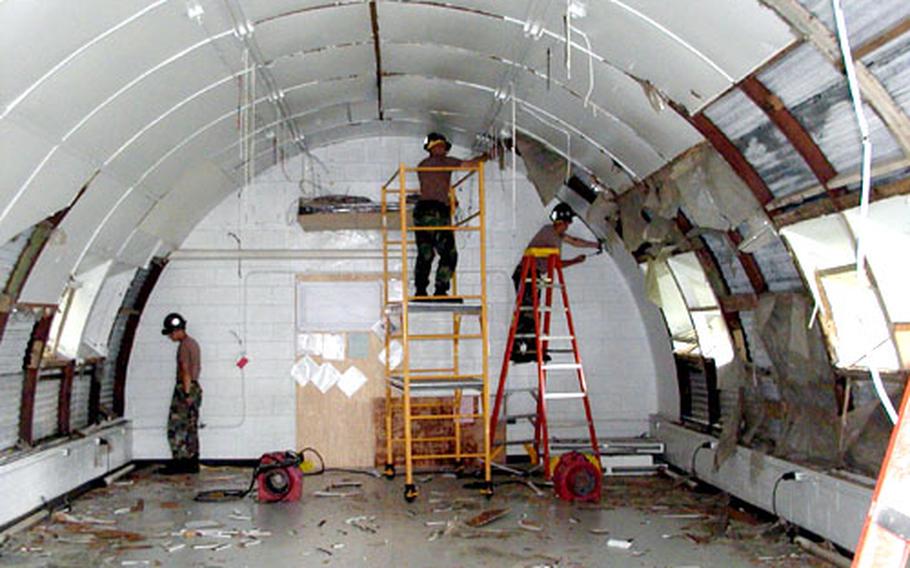 Seabees from Naval Mobile Construction Battalion 133 gut a Quonset hut during renovations for the shop. The Seabees’ work cut the cost of the project from an estimated $40,000 to $5,000. (Susan Meyers / Courtesy of Navy Officers Spouses Club of Okinawa)

CAMP LESTER, Okinawa &#8212; The smell of fresh paint greeted visitors to the Navy Gift Shops here Tuesday, mingling with the aroma of home-cooked food spread out for the Seabees who turned a pair of World War II-era Quonset huts into the shops&#8217; new home.

&#8220;These kids were just great,&#8221; said Susan Meyers, the shops&#8217; operations manager, as she showed a visitor around. She said the seven-member team from Naval Mobile Construction Battalion 133 worked six days a week for months doing much-needed renovations.

The gift shops, operated by the Naval Officers Spouses Club of Okinawa, have moved numerous times in their 40-year existence. Once located at the Navy&#8217;s port at White Beach, they were reassigned to Camp Lester. Structural problems inside the Quonset huts would have forced them to find another home.

&#8220;The Seabees rescued us, the condition inside the Quonsets was deteriorating,&#8221; said Meyers, the shops&#8217; operations manager for the past 2&#189; years. There was a lot of water and rust damage and all the windows and wallboards needed to be ripped out and replaced.

&#8220;Without their help, skills and dedication, this would have been near impossible for the stores to accomplish,&#8221; Meyers said.

The two stores operated by the club paid for materials for the first Quonset hut; the Seabees supplied the rest.

&#8220;Without this group we are not sure what would have happened to our store,&#8221; Meyers said. &#8220;It would not have been affordable for us to pay completely for the renovations, labor, operate and still contribute to our charities.&#8221;

The club operates two stores on Camp Lester: the Home Store, which features home d&#233;cor, furniture and jewelry, and the Kids&#8217; Cottage, which has clothes, toys and children&#8217;s furniture. Part of the profits goes toward educational scholarships; the rest is given to the American Women&#8217;s Welfare Association, which contributes to American and Japanese charities on Okinawa.

The Seabees described the job as challenging but rewarding.

&#8220;It was something that really needed to be done, and we have the skills to do it,&#8221; said Petty Officer 2nd Class Cheryl Murphy, 27, the crew leader. &#8220;Each side of the building took about a month to completely renovate. We put in all new installation, ripped out the windows, installed more and better lights &#8212; things like that.

NMCB 133 was sent to Okinawa from its home base in Gulfport, Miss., in June. The unit is scheduled to return sometime in the next two weeks.

Besides thanking the Seabees, Meyers said the picnic Tuesday was also &#8220;a chance to thank all of the volunteers that make the stores run as smoothly as they do.&#8221;

&#8220;It&#8217;s the dedication and hard work of the volunteers that make this possible,&#8221; she said, noting that the five paid employees wouldn&#8217;t be able to handle everything that needs to be done. &#8220;The volunteers do all the hard work, unloading the trucks, pricing the merchandise, organizing the displays, running the stores and then moving us when we&#8217;re assigned a new home.&#8221;