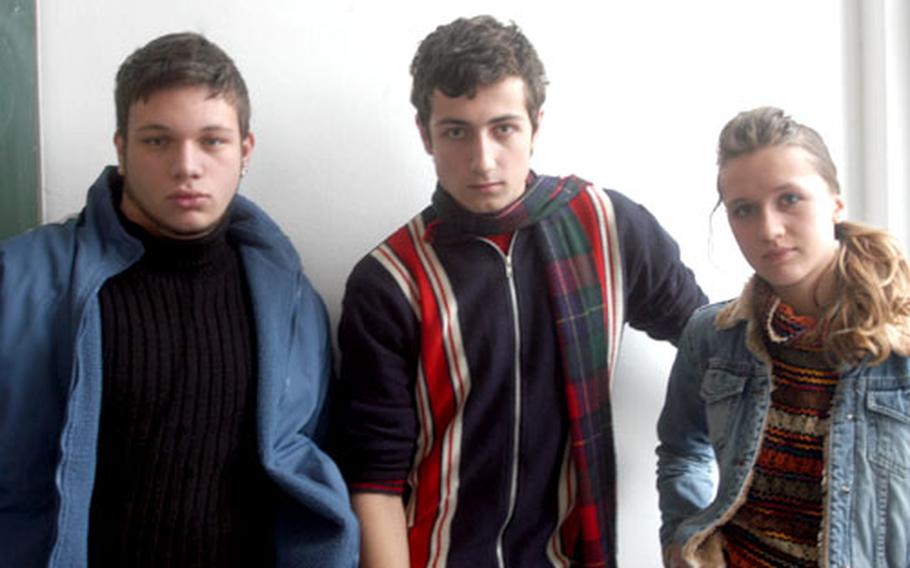 Semir Veskovic, Kemal Mehmedovic and Nardina Zubanovic, left to right, attend the High School of Applied Arts in Sarajevo, Bosnia and Herzegovina. "We don&#39;t think a lot about the war," Zubanovic said. "We&#39;re thinking of our future." (Kevin Dougherty / S&S)

SARAJEVO, Bosnia and Herzegovina &#8212; The two prettiest girls in class sat near a window overlooking a Sarajevo street.

They laughed and whispered before the start of their English lesson, but fell attentive when their teacher raised her hands and asked them to be quiet. In time, talk of the 1992-95 Bosnian civil war ensued, and recollections followed.

A boy, then a preschooler, remembers spending a lot of time in the basement, and only occasionally getting to ride his bike. Another student, a girl, recalled slipping into a pair of red trousers the night the war started.

One of the girls seated by the window, a strawberry blonde in a black sweater, spoke of the Sarajevo she returned to after the war.

Melisa said that, during the war, her father stayed behind while she, her brother and mother left to live with an aunt in Chicago. She and her mother returned from the United States in 1996, but her brother remains to this day. There was more to the story, in particular, about the father, but Melisa couldn&#8217;t finish as she was overcome with emotion, her friend consoling her.

As well as Bosnia and Herzegovina is doing a decade after peacekeepers arrived, war wounds remain &#8212; and will for some time.

Some scars, such as bullet- torn walls or one-legged men, are readily visible. Others, like Melisa&#8217;s broken heart, lie just below the surface. Still other wounds seem of the festering sort.

Samardzija, 45, who spoke through a translator, writes for a monthly periodical based in Pale, the Bosnian-Serbs&#8217; wartime capital. While Samardzija spoke of the future, it was clear that she longed for the old days, when &#8220;the house&#8221; was full, and people had jobs.

Now, only two Yugoslav republics remain (Serbia and Montenegro), the capital of the Bosnian-Serbian republic is Banja Luka, not Pale, unemployment is at least 40 percent and the outside world takes a dim view of her city. One journalist described Pale as &#8220;a city in the clouds that history has left to die.&#8221;

The students at the High School of Applied Arts in Sarajevo still have a few years to sort out their employment prospects. For now, they just want to be teens.

Ibrahimagic and a few of her students seem to find some credence in a train of thought swirling around Sarajevo that asserts the U.S. and Western Europe intentionally laid the groundwork for the Balkan wars.

While there is gratitude for the international peacekeeping effort, Semir Veskovic said more could have been done to help Bosnia. He and others spoke well of former President Bill Clinton, but less so of his successor.