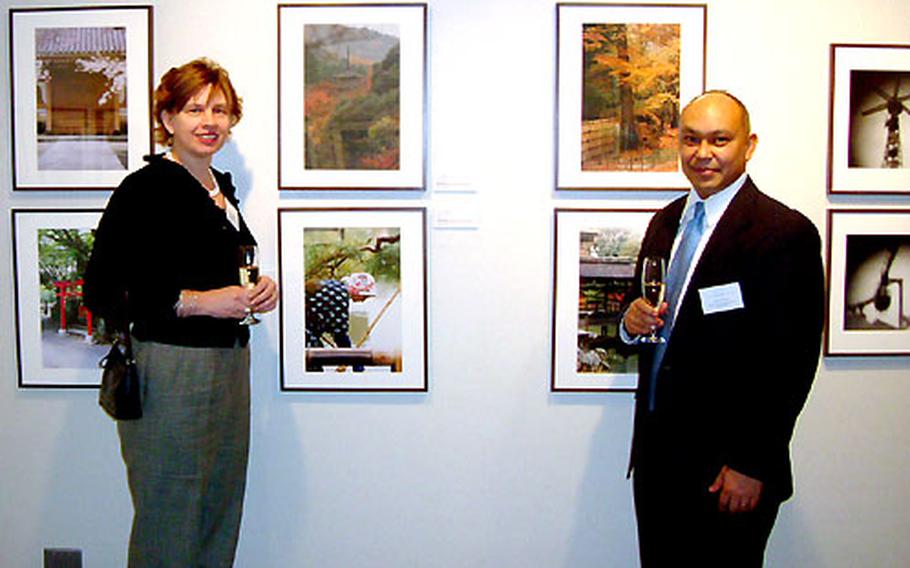 Lt. Col. Tony Plana and his wife, Brenda, stand in front of some of their photographs on display in Tokyo. The photos are featured as part of an exhibit on “Japan through Diplomats’ Eyes.” (Courtesy of Tony and Brenda Plana)

Several of the photos are now on display in Tokyo in the sixth annual &#8220;Japan through Diplomats&#8217; Eyes&#8221; exhibition, presented by the Japan Photograph Association, the Ministry of Foreign Affairs and many foreign embassies.

Diplomats from 23 countries stationed in Japan entered 400 photos for the contest. The photos are on display and many are catalogued in a book on the exhibit.

The Planas don&#8217;t consider themselves dedicated photographers; they just like to capture their trips across Japan for posterity.

This is the third time the Planas&#8217; work has been featured. Tony has one piece in the exhibit and one in the book while Brenda has three on display and one in the book. The works can also be seen at the Web site www.luxembourg.or.jp/photo/e-index.html.

This year, in addition to a grand prize, the exhibition featured the Prince Takamado Memorial Prize to honor the late member of the Japanese imperial family who was a respected photographer and was involved in the exhibition since its inception.

Each year the contest explores foreigners&#8217; views of Japan through a particular theme. This year&#8217;s was modernity.

This is the last year the Planas will be eligible to participate. In July, Tony Plana moved from his job of three years as Assistant Army Attache at the embassy to his new job as deputy in charge of host nation affairs at Camp Zama.

The event is also a chance for diplomats-cum-artists to mingle and talk about their work.

Brenda Plana said the exhibition isn&#8217;t really a contest with winners but rather an insight into foreigners&#8217; perceptions. But it is still an honor, she adds, to see vacation photos enlarged and on a museum wall.