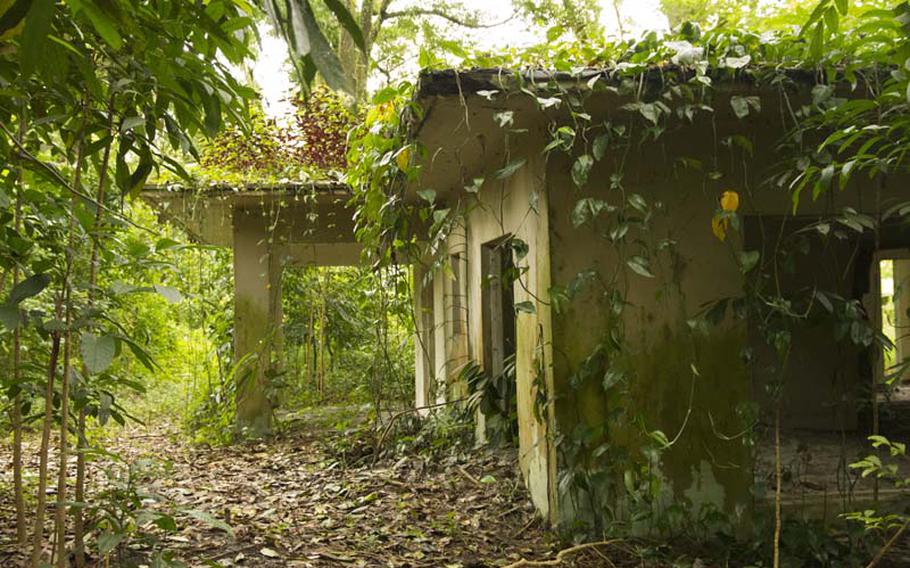 Jungle encroaches on one of dozens of abandoned concrete bungalows that housed Air Force families at Clark Air Base until the U.S. left the base in 1991. The buildings are all slated for demolition as development expands. (Wyatt Olson/Stars and Stripes)

Jungle encroaches on one of dozens of abandoned concrete bungalows that housed Air Force families at Clark Air Base until the U.S. left the base in 1991. The buildings are all slated for demolition as development expands. (Wyatt Olson/Stars and Stripes) 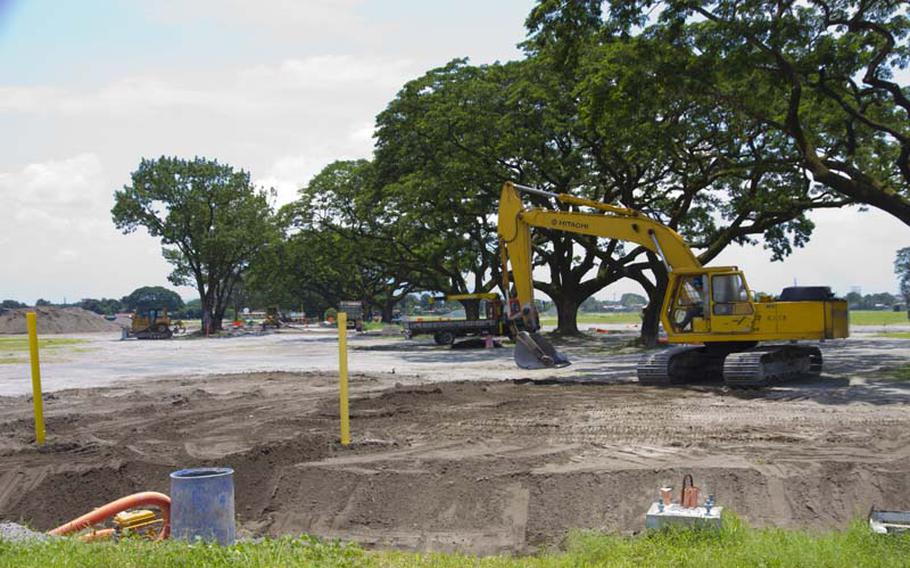 Heavy equipment is used to lay the underground utilities for the planned commercial center of Global Gateway Logistics City at Clark International Airport. Kuwaiti investors will spend $3 billion to develop the logistics-business hub, expected to near completion in about seven years. (Wyatt Olson/Stars and Stripes) 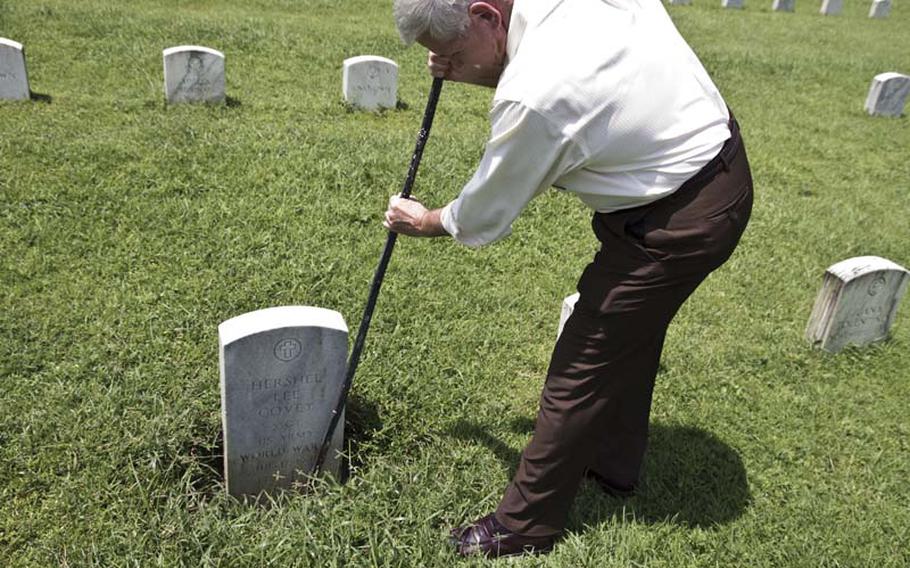 Dennis Wright, a developer at the former Clark Air Base, demonstrates how much ash settled atop Clark Veterans Cemetery during the eruption of Mout Pinatubo in 1991. Some gravestones are obscured by more than a foot of packed ash. (Wyatt Olson/Stars and Stripes) 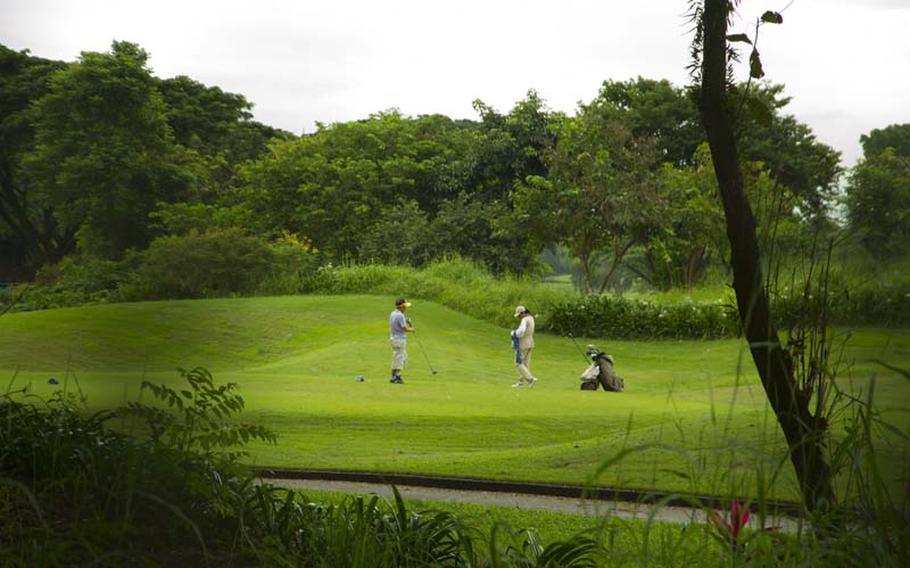 A pair of golfers play through a fairway at Mimosa Golf Course, the largest of several courses in the Clark Freeport Zone. The game is one of the major tourist attractions in the region and is particularly popular with South Koreans. (Wyatt Olson/Stars and Stripes) 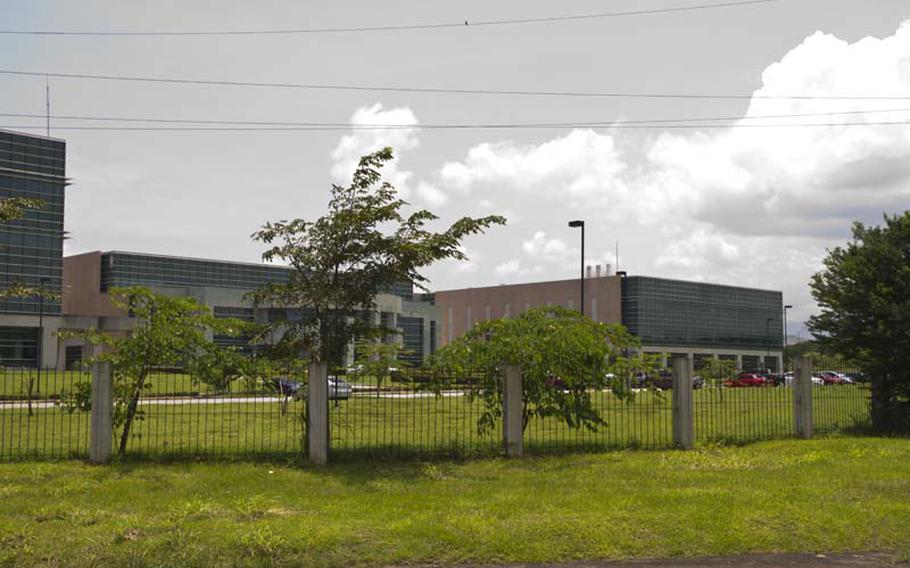 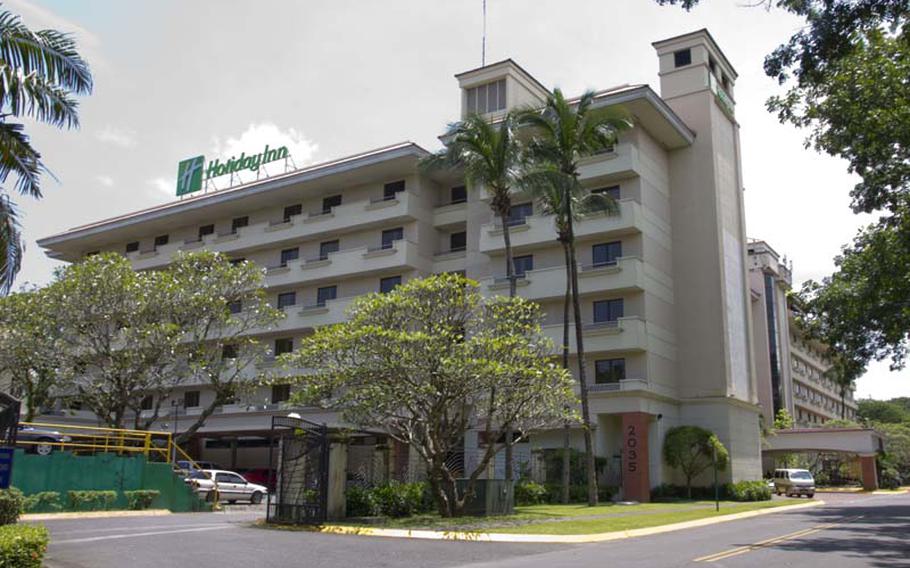 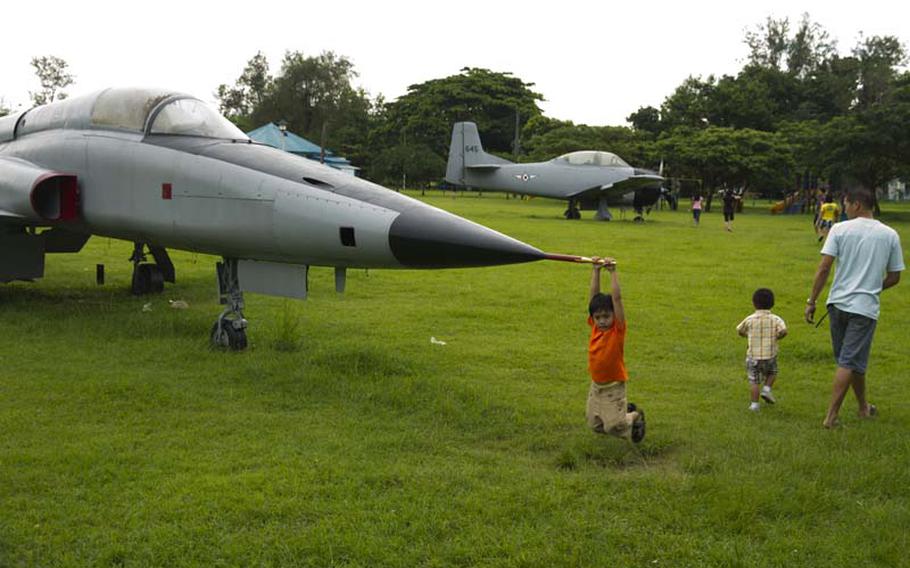 Filipino families enjoy relics culled from the Philippine Air Force in a park near Clark International Airport. Long-range plans call for the park and dozens of nearby dilapidated buildings, built by the U.S. Air Force, to be removed for a third runway. (Wyatt Olson/Stars and Stripes) 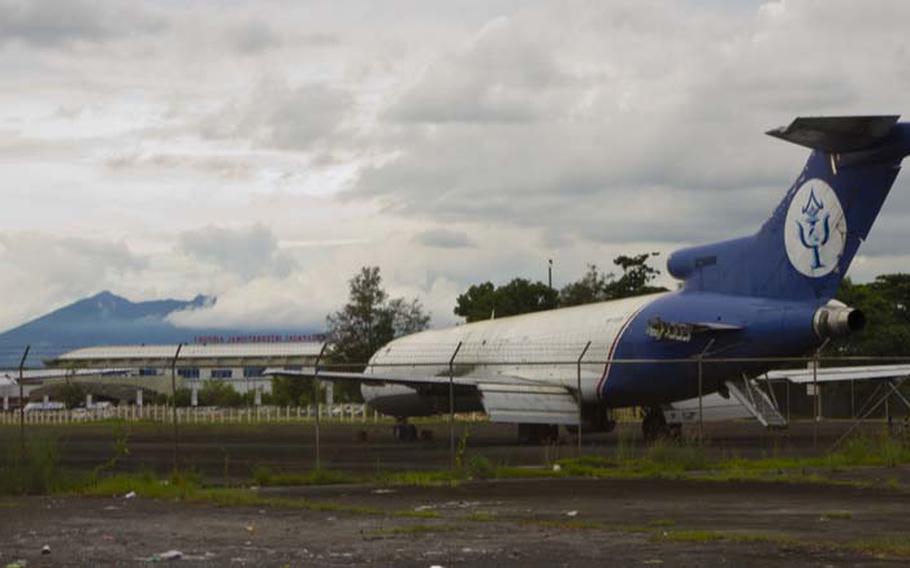 A decommissioned jet, used for training flight crews on emergency exits, sits near the passenger terminal of Clark International Airport, with Mount Arayat in the distance. The terminal, built by the U.S. Air Force, is operating at full capacity to handle the more than 1 million passengers using it this year. (Wyatt Olson/Stars and Stripes)

ANGELES CITY, Philippines &mdash; When Mount Pinatubo erupted in June 1991, a typhoon drenched the massive ash plume, spawning a gray sludge that swamped much of the Philippines&rsquo; northernmost island, Luzon.

Clark Air Base, just nine miles east of the volcano, was covered by thick muck the consistency of cement. About 15,000 airmen and family members living there were shuttled by sea and air to the southern Philippines, then back to America. The Air Force soon abandoned the base.

Tens of thousands of Filipinos who had relied on the bases for work were jobless. Some turned to looting the bases of everything from timber to scrap metal.

Today, after two difficult decades, the Philippines is converting the former bases into an air-sea logistics hub that officials claim will rival that of any nation in the region.

About $8 billion of goods were exported through Clark and Subic last year. The number of jobs stemming from the former bases is about 160,000 &mdash; more than triple the peak employment for Filipinos during the U.S. era.

&ldquo;The idea is to create a logistics hub for central Luzon so that the [tenants] of both Subic and Clark would have access to a seaport and an international airport,&rdquo; said Felicito Payumo, chairman of the Bases Conversion Development Authority, which has shepherded development of both former U.S. military sites.

&ldquo;In this age of just-in-time production and delivery, it&rsquo;s very advantageous that [tenants] in the Subic-Clark area be competitive with their rivals in other places in the region,&rdquo; she said.

The linchpin in that plan is the recently rechristened Clark International Airport. It could replace the cramped Ninoy Aquino International Airport &mdash; about 60 miles to the south in Manila&rsquo;s urban sprawl &mdash; as the nation&rsquo;s premier airfield. The U.S. Federal Aviation Administration downgraded NAIA&rsquo;s status in 2008 because it didn&rsquo;t provide safety oversight of its carriers according to international standards. The European Union banned Philippine carriers in 2010.

Supporters of Clark airport, the logistical backbone for America&rsquo;s military during the Vietnam War, expect it to become the national gateway for international tourism and trade. Control over it was recently handed to the Department of Transportation and Communication &mdash; a measure of its emerging national importance.

That&rsquo;s the future projected by some for the former military base, now called the Clark Freeport Zone.

It&rsquo;s a vision that has its naysayers, including the nation&rsquo;s flagship air carrier. In August, Philippine Airlines president Ramon Ang announced intentions to build a 5,000-acre airport near Manila&rsquo;s central financial district, Makati, for the airline&rsquo;s exclusive use. It would include two parallel runways with space to build two more, he said.

Still, Wright and many others believe Clark is destined to be the nation&rsquo;s foremost airport. While giving a tour of the 11,120-acre freeport zone, Wright, who served 33 years as a U.S. Navy officer, ticked off the reasons.

Expansion in Manila has long been discussed but would require acquiring huge tracts of private land or reclaiming land from Manila Bay. Both would be extremely expensive.

Land for expansion of a third runway and future terminals at Clark has been &ldquo;reserved,&rdquo; Wright said.

&ldquo;The government won&rsquo;t have to go through the right of eminent domain to acquire it,&rdquo; he said.

Clark is also less vulnerable to flooding. Heavy rains late this summer flooded much of Manila and hampered transportation &mdash; often clogged to a near-crawl at the best of times &mdash; to and from the city&rsquo;s airport.

The Subic-Clark-Tarlac Expressway, which opened in 2008, reduced the driving time between the two former bases from three hours to 30 minutes.

One of the largest hurdles for Clark is transportation to and from Manila. Philippine Airlines&rsquo; Ang said the current two-hour trek is too inconvenient.

Ang said he didn&rsquo;t believe the government would succeed in building a proposed $10 billion high-speed railway between the two points. A Chinese firm began work in 2004, but the project ended in lawsuits and acrimony.

Early this month President Benigno Aquino seemed to backtrack from the Clark airport, saying its future is contingent on high-speed rail.

The government, however, has approved plans to connect two expressways to complete a Clark-NAIA link, said Victor Luciano, president and CEO of the Clark International Airport Corp. That could make the driving distance a relatively predictable 90 minutes, he said.

Payumo said Haneda and Narita airports didn&rsquo;t have a rail connection initially, making do at first with expressway connections.

Passenger volume has soared at Clark, from a miniscule 14,000 in 2003 to an estimated 1.4 million &mdash; mostly Asian tourists &mdash; this year, Luciano said.

Eight budget airlines have routes to the airport, including AirAsia, Asiana and Dragonair, with more slated to begin routes during the next year.

Among the seven cargo carriers using Clark are FedEx and UPS.

The freeport zone has attracted international manufacturers, such as Texas Instruments and Samsung.

Although a work in progress, the Kuwaiti-funded Global Gateway Logistics City has pulled in a wide variety of manufacturers with its all-underground fiber-optic cables and electric lines and wide roads.

What GGLC won&rsquo;t accommodate &mdash; nor, Wright argued, should it be any part of Clark Freeport Zone &mdash; is anything resembling a permanent outpost for the U.S. military.

Earlier this year, however, Foreign Affairs Secretary Albert del Rosario told Reuters that the nation was in talks with Washington about increasing the U.S. military presence in exchange for more equipment and training.

At Clark, that presence is now limited to a dozen or so space-available flights per week. During joint exercises by the U.S. and Philippines, some servicemembers billet at the freeport zone&rsquo;s Holiday Inn, which was once the bachelor officers&rsquo; quarters.

Wright said he believes the Philippines has worked too hard, with little assistance from the United States, to lose any control of the Clark-Subic hub.

&ldquo;When you see the success story of Clark and Subic, why would you want anything to jeopardize all that hard work?&rdquo;