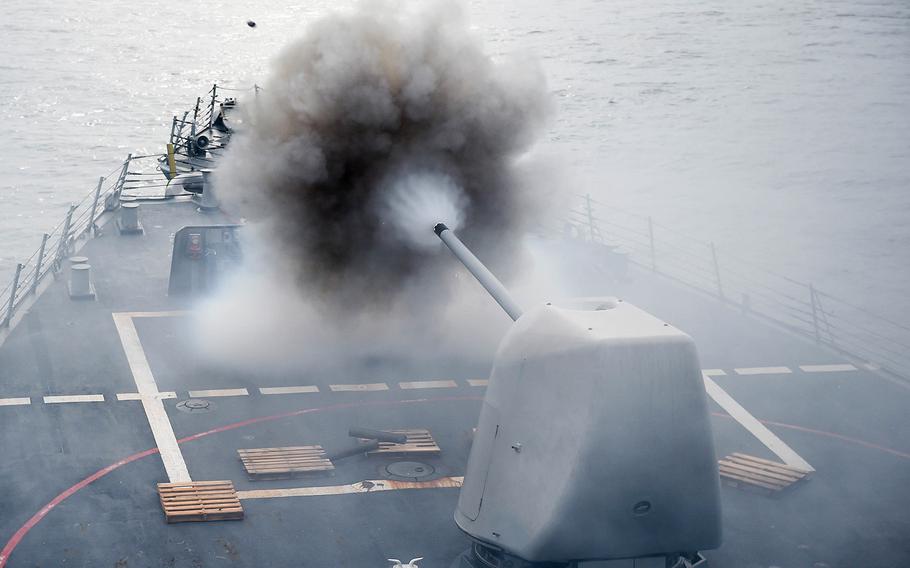 America’s strategy for confronting China in the South China Sea is threatening to unravel as the new leader of a key frontline state backs away from military cooperation — including joint naval patrols — with the U.S.

Philippine President Rodrigo Duterte said this week he wants U.S. special operators to leave Mindanao island, where they are assisting in the fight against Islamist extremists.

The next day, Duterte said he won’t allow the Philippine navy to conduct joint patrols with foreign powers near the South China Sea, apparently scrapping an agreement his predecessor reached with the U.S. before he took office in June.

“They (U.S. officials) want enough diplomatic pressure on China to give it an incentive to behave. That is where the U.S. might have a problem with Duterte,” he said.

The Filipino strongman has expressed regret for calling President Barack Obama a “son of a whore” at the recent G20 meeting in China. But he raised more questions Monday about the U.S.-Philippines relationship.

Speaking during an oath-taking ceremony for state officials, Duterte blamed America for Islamic militancy in the archipelago’s south and called for the withdrawal of U.S. advisers from the area, according to The Associated Press.

“For as long as we stay with America, we will never have peace in that land,” he said, adding that U.S. special forces in Zamboanga “must go” because they could become high-value targets for Abu Sayyaf rebels, who are notorious for kidnapping and beheading foreigners.

While other officials quickly dismissed suggestions that Duterte could break commitments with the U.S., which include hosting rotational forces, and erode the bilateral relationship, the comments raise questions about how he will handle territorial disputes in the South China Sea that involve several nations.

Duterte has signaled that he’s open to bilateral negotiations with China, which is at the center of the disputes, and he hasn’t pressured Beijing to comply with a ruling in his country’s favor from an international tribunal based in The Hague.

That stance puts him at odds with U.S. officials, who would prefer that international law be upheld and that no impediments develop to free trade in the region. It’s also weakening resolve among other nations with sea territory claims, Heydarian said.

Vietnam, which was taking inspiration from its neighbor, is becoming less hawkish, and Singapore and Indonesia are dialing back their rhetoric, he said.

“The U.S. hasn’t acted to drawn a red line (over the South China Sea issues),” Heydarian said. “If they aren’t willing to do that, then why should small countries stand up to China and risk conflict and billions in forgone investment opportunities?”

Much of Southeast Asia prefers Duterte’s approach, he said.

Indonesia, Malaysia, and Singapore, which have been alarmed by Chinese assertiveness in the South China Sea, have remained fence-sitters, refusing to hammer Beijing on its destabilizing behavior, he said.

“Only the U.S., Japan and other like-minded external powers have raised the arbitration issue and the need for compliance,” he said.

In his book “Asia’s New Battlefield: The USA, China and the Struggle for the Western Pacific,” Heydarian writes that Asian nations should seek resolution of maritime disputes that conform to international law but that small powers such as the Philippines should reduce their reliance on external powers, most notably the U.S., by building their own defense capabilities and pursuing confidence-building measures vis-à-vis China.

However, China, which has reclaimed land and built military facilities in the disputed Spratly Islands, appears poised for more provocative acts in another disputed area — Scarborough Shoal.

Last week, the Philippines released images of Chinese boats near the shoal and expressed concern. The Hague court ruled that both Chinese and Filipino fishermen had traditional rights to the area and reprimanded China for blocking Filipino fishing boats.

Duterte must choose whether to negotiate with China over the waters or call for the judgment to be upheld, according to Patricio Abinales, a University of Hawaii expert on the Philippines.

Filipino business interests favor negotiation because they don’t want to jeopardize Chinese investment in mining, agriculture and fisheries in the southern Mindanao region, whereas the military would rather international law be upheld, he said.

Chinese economic activity in the Philippines is still tiny compared to the U.S., which contributes 13 percent of foreign direct investment in the islands, but Duterte likely hopes it will increase and that infrastructure projects could be offered as part of his negotiations with the Chinese, Heydarian said.

Duterte — trusted by nine out of 10 Filipinos according to a Pulse Asia survey taken a few days after he was sworn in as president on June 30 — has plenty of political capital to spend.

But a rift with the U.S., which along with the United Nations has been critical of recent extra-judicial killings of drug dealers in the Philippines, won’t strengthen his hand in the sea dispute, said Hawaii-based Pacific Forum think tank president and former U.S. Air Force officer Ralph Cossa.

The Philippines doesn’t have back-up other than the U.S. should the dispute with China heat up, he said.

Chinese influence in Cambodia means there has been no mention of the Hague verdict by the Association of South East Asian Nations (ASEAN), which operates on a policy of consensus on issues. Other nations providing military assistance to the Philippines, such as Japan and Australia, are there as allies of the U.S., Cossa said.

A danger for Duterte is that if the Chinese get the impression that the U.S. won’t come to his aid, they are more likely to act up in the South China Sea, he said.

“Clearly the ball is in the Philippines’ court, he said. “Filipinos speak English, but they could start learning Chinese.”

“He’s willing to push back on any criticism from the west on issues where he doesn’t think there should be foreign interference, like human rights,” he said.

He is also signaling the Chinese that he is not a proxy of the U.S. and that he’s open to a bilateral deal in the South China Sea, Heydarian said.

“That is raising eyebrows and worries in the US,” he said.

The experts agreed that Duterte won’t scuttle the existing security agreements with the U.S.

U.S. forces training and operating out of the Philippines are governed by a Visiting Forces Agreement and the more recent Enhanced Defense Cooperation Agreement. U.S. counterintelligence trainers have been credited with helping the Philippine military make inroads against Islamic extremists.

If Duterte attempted to undermine the agreements, he’d clash with his own military, Heydarian said.

“The relationship is going on whether he has an outburst or not,” he said.

Cossa said the Filipino people won’t support too much confrontation with the U.S.

“There will be some elements in the Philippines who will applaud his outspokenness. The general mood will be, `We can’t afford to piss off the U.S. when we are being bullied by China,’ ” he said.

U.S.-based Filipinos sending checks back home won’t appreciate the level of disrespect shown to America by Duterte, he said.

Heydarian said there is scope for Duterte to limit access for U.S. forces in the Philippines if the tensions persist.

On the U.S. side, the best option is for officials to bide their time, he said.

If China builds military facilities in Scarborough Shoal, impedes Filipino troop movement or doesn’t allow Filipino fishermen to return, it is possible that things could change within a year, he said.

“If China takes Duterte for a ride, it will be a huge blow to his credibility. People in the Philippines are very critical of China. If nothing happens in a year, he will be under pressure to adopt a different strategy,” he said.