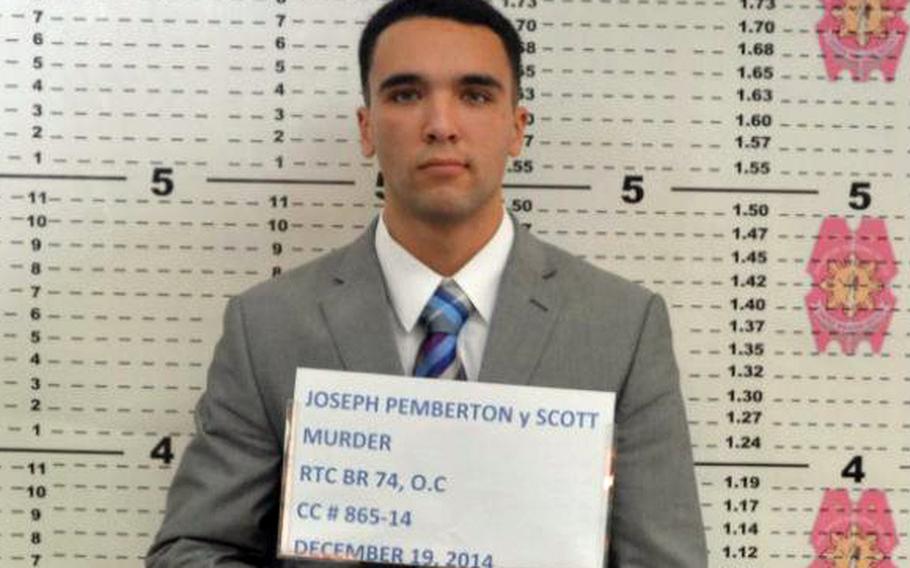 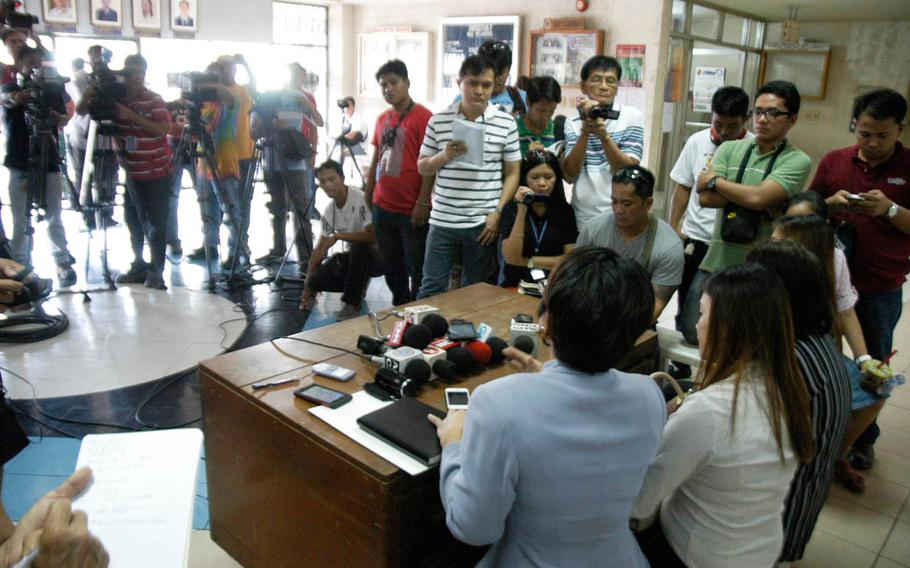 Buy Photo
Virgie Suarez, center left, an attorney for the late Jennifer Laude's family, and family members talk to journalists during the trial of U.S. Marine Pfc. Joseph Scott Pemberton, who is accused of the killing of Laude in October 2014. (Seth Robson/Stars and Stripes)

Protests are likely in the Philippines no matter what verdict is issued Tuesday in the trial of a U.S. Marine accused of killing a transgender woman whom he picked up in a bar and took to a hotel for sex.

The case — which has been heard sporadically since March in a courtroom in Olongapo City, about an 80-mile drive from Manila — has cast a pall over the renewal of military relations between the U.S. and the Philippines, providing fodder for those who object to any American presence.

Pfc. Joseph Scott Pemberton is charged with killing Jeffrey “Jennifer” Laude, 26, on Oct. 11, 2014. The two met in a disco in a red-light district of Olongapo — the main city along Subic Bay — while Pemberton was bar-hopping with other Marines after joint U.S.-Philippine military exercises. They checked into a nearby hotel, and Laude was later found strangled with her head in the toilet.

“When the Pemberton verdict is announced, there will be protests regardless of the outcome,” said Carl Baker of the Pacific Forum think tank in Hawaii. “When people are reminded of the crime, there is a bump in anti-American sentiment.”

There have been periods in recent years when a single incident has sparked weeks of protests in front of the U.S. Embassy.

If Pemberton is acquitted, there will be accusations that the trial was fixed. If he’s convicted, appeals are certain, and there likely will be wrangling over where he will be held while they are heard. The Philippines will want custody — TV news has reported a cell has been prepared — while the U.S. will almost certainly seek to avoid handing him over until the judicial process is completed.

When Marine Lance Cpl. Daniel Smith was convicted of rape in 2005 and sentenced to 40 years, many Filipinos were angry when he was detained at the U.S. Embassy, rather than a local prison, and then returned to the U.S. following a settlement with the victim’s family.

But public support also has been growing for a stronger U.S. military presence, particularly with China’s aggression in the South China Sea, the ongoing threat of terrorism and the typhoons, earthquakes and volcanoes that regularly batter the country.

U.S. bases in the Philippines were shut down more than two decades ago after the Philippine Senate rejected a treaty to renew their lease.

Then came the rise of Muslim separatist groups like the al-Qaida-linked Abu Sayyaf, which carried out illegal activities, including a lengthy mass kidnapping in 2001 when they used the ransom to buy better weapons and boats.

The U.S. sent in counterterrorism trainers, high-tech surveillance equipment and other gear to help raise the Philippine military’s professionalism in what was dubbed the second front in the global war on terrorism after Afghanistan.

Despite criticism of the return of American troops, that low-key mission — U.S. forces were banned from direct involvement in combat — has been largely hailed as a success, with Abu Sayyaf’s leadership decimated.

The U.S. military’s image has been further burnished by its help in the wake of natural disasters, particularly the most powerful typhoon on record that devastated large swaths of the central Philippines two years ago.

Then China began building up disputed low-lying reefs and islets in the South China Sea that are claimed by the Philippines and other countries. There have been small-scale clashes, leading Manila to sign an agreement with President Barack Obama to allow U.S. forces to pre-position disaster relief supplies and other materials in the country.

That deal spawned its own backlash, with the Philippine Senate calling it a treaty that should require Senate ratification instead of something that the president could finalize alone. The national Supreme Court is considering the constitutionality of the agreement now, with a decision expected in December that could spark its own protests.

Patricio Abinales, a Philippines expert at the University of Hawaii, says any fallout from the Pemberton case is likely to be short-lived.

“I think there will be the usual noise from the small left-wing groups, but in the light of what China is doing, and with Obama reiterating American commitment to Philippine security during last week’s APEC meeting, Pemberton’s case will be in the media for at most a week, then disappear to the inside pages,” Abinales said.

Stars and Stripes staffer Seth Robson contributed to this report.