Philippine military gets 2 ships, 10 helicopters with more on the way 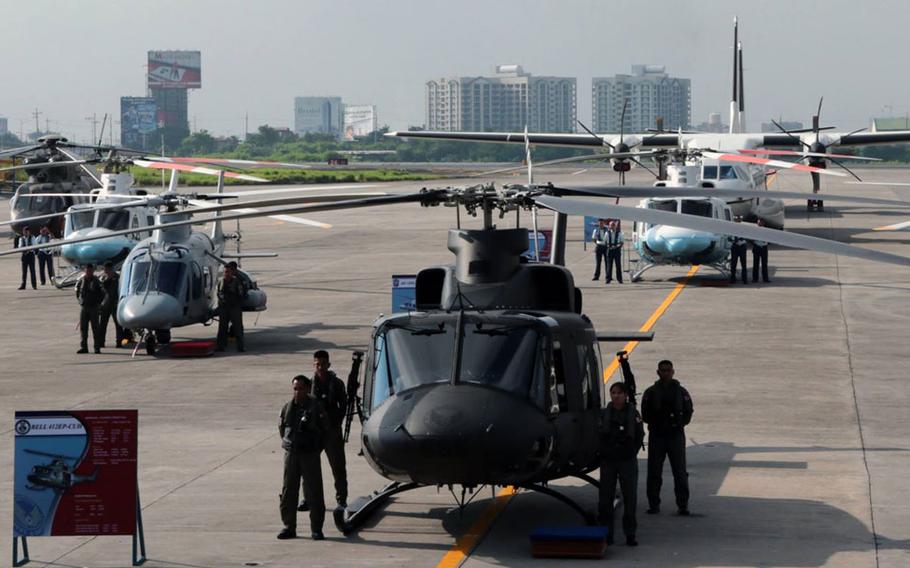 Eight combat utility helicopters were turned over to the Department of National Defense last week. The Philippine Air Force (PAF) hosted the event, inviting the Ambassador Philip S. Goldberg to give remarks as part of the ceremony. The turnover of the CUHs was a joint effort by the Philippine, U.S. and Canadian government. (U.S. Embassy Manila photo)

YOKOTA AIR BASE, Japan — The Philippine military has gotten a boost with the delivery of two transport ships donated by Australia and a fleet of combat utility helicopters acquired with help from the U.S. and Canada.

The equipment will help the island nation respond to natural disasters such as Typhoon Haiyan, which killed more than 6,000 people in 2013, but it’s also part of an effort to stand up to China, which has been flexing its muscles in sea territory claimed by the Philippines.

The dispute centers on the Spratly Islands, a collection of islets and reefs largely within the Philippines’ exclusive economic zone, where China has been building artificial reefs, runway strips and other fortifications.

The Philippines is pressing its claim to the territory in international court, but its military has been ill-equipped to challenge China’s moves. A recent agreement designed to give U.S. forces access to a number of bases in the Philippines is seen by experts as a hedge against China.

At the same time, the Philippines is trying to build up its armed forces. The country has been weaning itself off more than a decade of counterterrorism support from the U.S. and shifting its focus to external threats.

The U.S. Embassy in Manila posted photos of eight Bell-214EP helicopters — used for combat operations, transport and relief efforts – being delivered to the Philippines last week. The acquisition of the choppers -- powered by Canadian-made Pratt and Whitney engines — was facilitated by the Canadian government.

The Philippines is also boosting its naval assets. Earlier this month, it received two landing craft heavy ships donated by the Royal Australian Navy, according to the Philippine Star newspaper.

The ships, formerly known as the HMAS Tarakan and Brunei, have been renamed BRP Ivatan and Batak, the Star reported.