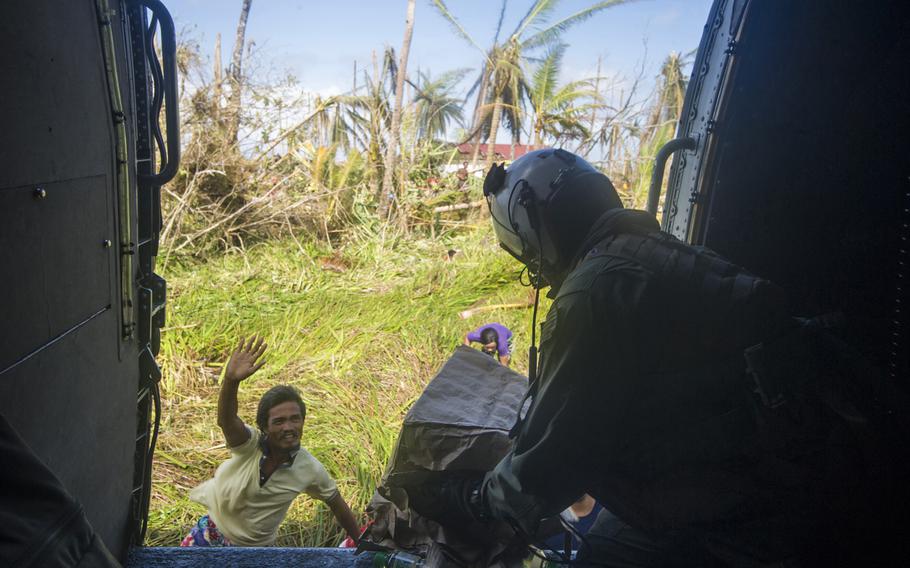 Petty Officer 3rd Class Peter Olson distributes supplies from an SH-60B Seahawk to citizens on Leyte in support of Operation Damayan in The Philippines on Nov. 16, 2013. The Seahawk is assigned to guided-missile cruiser USS Cowpens. Aboard Cowpens are several Philippine-born U.S. sailors helping with the post-typhoon aid effort. (U.S. Navy)

Petty Officer 3rd Class Peter Olson distributes supplies from an SH-60B Seahawk to citizens on Leyte in support of Operation Damayan in The Philippines on Nov. 16, 2013. The Seahawk is assigned to guided-missile cruiser USS Cowpens. Aboard Cowpens are several Philippine-born U.S. sailors helping with the post-typhoon aid effort. (U.S. Navy) 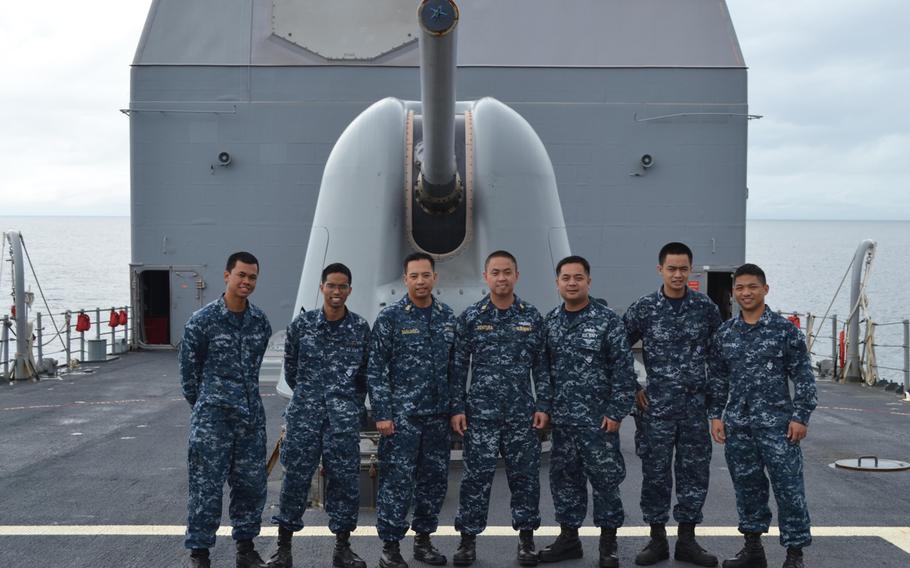 Pait, who was born and raised in the Philippines until he was 16, struggled to grasp what he saw as the ship approached the country’s shoreline.

“It’s supposed to be green there,” Pait said, describing the landscape ravaged Nov. 8 by Typhoon Haiyan, one of the most powerful storms to make landfall. “It was all gone, 360 degrees. There was a puff of smoke around it. It’s like seeing a desert that used to be a forest.”

Among the thousands of servicemembers working to provide aid to the Philippines are at least hundreds in the U.S. 7th Fleet who were born there or have family in the country.

Stars and Stripes spoke by phone with seven Philippine-born sailors currently serving aboard Cowpens, off the coast of Leyte.

They were all enjoying free time during a Hong Kong port visit earlier this month when news of the typhoon came.

At first, few expected the tragedy to become so widespread.

“When we were growing up, we always had typhoons and storms,” said Petty Officer 1st class Roel Villasin, who moved from Manila to California as a teen. “My heart dropped when I saw all the pictures from this one.”

Friends began posting messages on Villasin’s Facebook account, asking if anyone had heard from relatives in the affected region.

“I couldn’t do anything to help out, knowing I was so close to the Philippines, in Hong Kong, underway,” Villasin said. “I was just hoping for some kind of humanitarian mission … It’s the first time I was recalled [from liberty] where I was so happy to be recalled.”

As they prepared for the mission, some were still trying to get in touch with close family. With the destruction of the communications infrastructure in Tacloban and its surrounding areas, some sailors still don’t have definitive answers.

“Right now, I haven’t heard anything from my mom about what happened to her family,” Pait said.

Pait and several others aboard Cowpens requested permission to leave the ship and work as translators on the ground. However, there are already people on the ground doing those jobs.

While work aboard Cowpens may offer less immediate gratification, they contribute no less to the big picture.

As a personnel specialist, Petty Officer Third Class Rainier Samalea adds efficiency to the aid effort by getting the right people where they need to be.

“I have a feeling of satisfaction being here,” Samalea said. “I just wish I could get on a helicopter.”

Samalea was possibly the least surprised at the toll Typhoon Haiyan took. As a teenager, he saw the devastation caused by Typhoon Reming as a teenager in 2006 in Legazpi City.

That storm caused mudslides from the Mayon volcano that buried nearby villages, killing at least 800 people. During his down time aboard Cowpens, Samalea hears from his mother and from friends who know from the local news that he is helping the country recover.

“They say they’re so proud of me … proud that I’m a part of these operations,” Samalea said.

The support the sailors get from family helps them through the long days, they say, as do the messages from strangers on the ship’s Facebook page, thanking them for their work. But their motivation also comes from a desire to help a little during what many consider the most important time of the year to gather with family.

On top of their duties, Cowpens sailors did what they could recently to provide a little cheer to the area’s children.

They chipped in and bought candies, chocolate and other treats from the ship store. They sent the treats with other aid and got back pictures of children receiving them.

“You could see the smiles on the kids’ faces,” Senior Chief Petty Officer Jeruel Simsuango said. “It was very satisfying to see.

“I’ve been in the Navy for 17 years and been part of many operations,” Simsuango added. “But this operation, it’s tops on a personal level. When I do get out of Navy and I look back, I’ll say this operation here was the most satisfying one.”