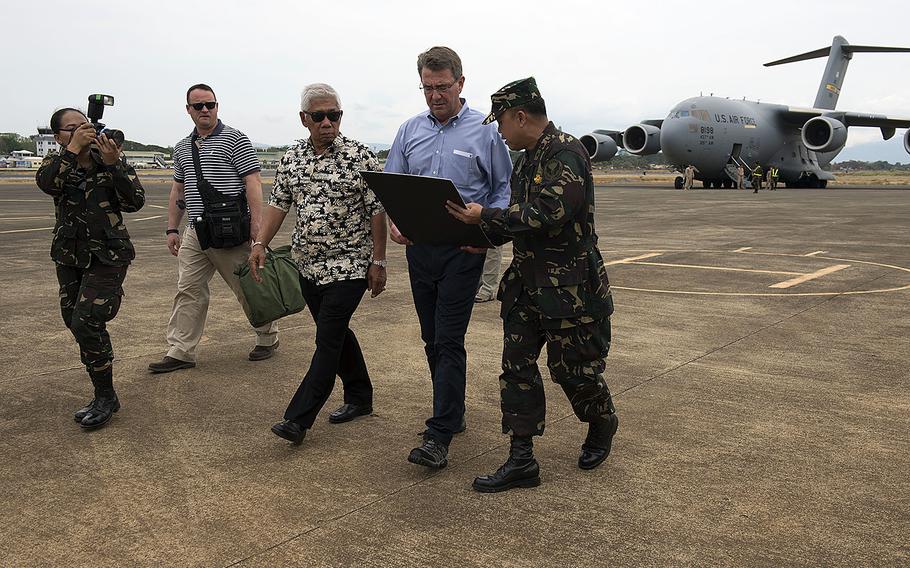 MANILA, Philippines — Supporters of a deal allowing the U.S. access to military bases in the Philippines are hoping the new president-elect will embrace the agreement despite his outspoken opposition to U.S. influence and his promise to shake up foreign policy when he takes office next month.

Rodrigo Duterte, the 71-year-old Davao mayor, bested four other candidates in the May 9 election with his law-and-order platform and a promise to upend the status quo.

Washington and Manila have yet to hash out the details of a base-sharing agreement that call for developing five military bases to be used by rotational American forces, and Duterte would face strong resistance if he simply abandoned agreement, an executive order by current President Benigno Aquino III,

But proponents of the base-sharing plan are concerned that his administration could drag its feet and effectively neuter it.

Duterte’s choices to head the departments of national defense, foreign affairs and treasury will reveal much about his intentions toward base-sharing, said Virginia Bacay Watson, a professor at the Asia-Pacific Center for Security Studies in Honolulu.

The two countries announced the base-sharing deal in February under the terms of the Enhanced Defense Cooperation Agreement signed in 2014. Those facilities are Antonio Bautista Air Base in Puerto Princesa; Basa Air Base in Floridablanca, Pampanga; Lumbia Air Base in Cagayan de Oro in southern Mindanao; Fort Magsaysay in Nueva Ecija province; and Mactan-Benito Ebuen Air Base in Cebu.

“The U.S. is working closely with the Philippines to develop project proposals to enhance the existing military infrastructure and installations at these five locations that will enable high-impact, high-value training for both the Armed Forces of the Philippines and U.S. Pacific Command,” Cmdr. Bill Urban, a Defense Department spokesman, said in a written statement.

Runway repairs and expansions, depots for pre-positioned disaster-response supplies and fuel storage tanks are among the infrastructure upgrades being considered, said Urban, who could not say when the proposals would be approved.

A decision has not been made on the upgrades, said a spokesman for the Philippine Department of National Defense.

The base-sharing agreement marked a new era for military relations between the two countries. The U.S. military pulled out of the Philippines in the early 1990s after negotiations broke down on extending leases for American bases.

But with the rise of jihadist terrorism at the turn of the millennium, the two nations found themselves fighting a common enemy, and the U.S. deployed a small contingent of counterterrorism trainers to Mindanao, where the al-Qaida-linked Abu Sayyaf group was responsible for a spate of kidnappings and bombings. That effort helped pave the way for the EDCA in 2014, which Aquino’s U.S.-friendly administration saw as a way of pushing back against China’s aggressive expansionism underway on the nation’s west coast in the South China Sea.

The five bases require varying degrees of improvement, particularly Fort Magsaysay and Basa Air Base, which are in remote areas and lack sleeping quarters and mess hall facilities that meet American standards for rotations longer than a few weeks.

The U.S. and Philippines jointly patrolled the South China Sea in March and early April, and the Philippine defense secretary has expressed desire to continue those patrols.

About 80 U.S. personnel, primarily Marines, also stayed on after Balikatan at the headquarters of the Armed Forces of the Philippines at Camp Aguinaldo, on the outskirts of Manila, to work on enhancing joint command-and-control capabilities between the militaries.

Duterte has sent mixed signals about his policy direction toward the U.S. military and relations with China. At times he’s said America should butt out, but other statements have made it sound as though there’s a place for the U.S. in multilateral discussions with China over claims of sovereignty for South China Sea islands and reefs.

“I don’t think [Duterte’s] going to change the current line of calling for U.S. support in the face of China,” said Carl Baker, an Asia expert at Pacific Forum Center for Strategic and International Studies, a Honolulu-based think tank.

“Fortunately the EDCA is in place so they don’t have re-adjudicate that,” he said. “That should help some. I’m certain that Duterte is going to be able to appreciate the value of EDCA, at least initially, as he starts trying to govern.”

One key to successful governance will be the level of support Duterte receives from his military.

“I don’t know how that relationship will work out,” Baker said. “I don’t see that as being a conflictual relationship, at least up front.”

The military is generally supportive of strong law enforcement, Baker said. Duterte has touted his tough-on-crime stance as mayor of a large city on the island of Mindanao, an epicenter of terrorism and violent crime, and admitted he was involved in extrajudicial killings of criminal suspects.

“But you really have to see how this guy governs and how he treats the military and what he does with the military,” Baker said.

Gerard Finin, a senior fellow at the East-West Center in Honolulu, said the individuals he’s spoken to within the Philippine military understand that the country’s bilateral relationship with the U.S. is essential to working through the South China Sea dispute with China.

“There’s momentum now for military modernization, upgrades,” said Watson, adding that the Philippines military is a major stakeholders in those upgrades.

“And the military will champion the cause,” she said.