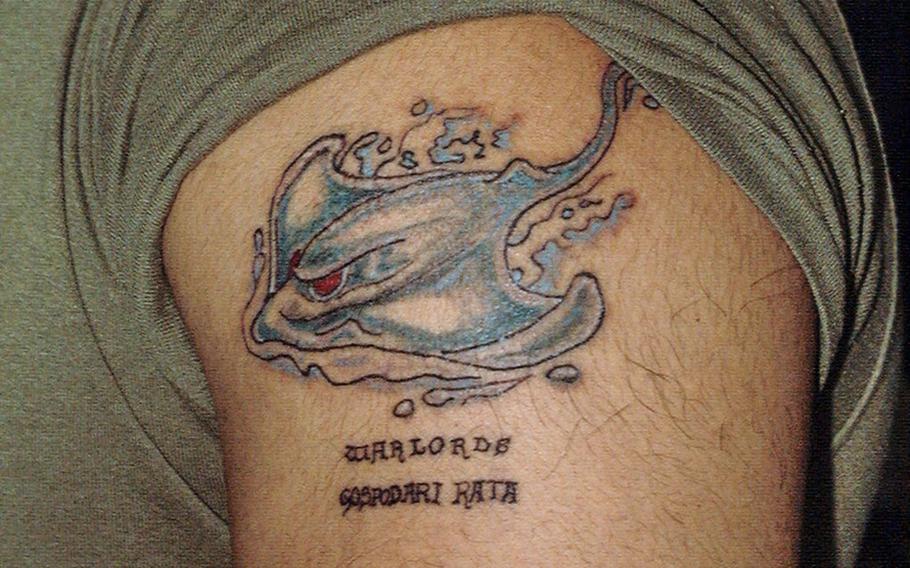 Buy Photo
U.S. Marine Cpl. Richard Sierra shows off his tattoo, which has “Masters of War” written in Croatian. (IVANA AVRAMOVIC/Stars and Stripes)

The USS Austin’s gray hull rang with urgency. War paint masked the faces of soldiers who knew what it was they had to do next: It was time to launch.

The Marine infantry sergeant called out numbers to keep himself and 11 other Marines in step as they carried their heavy rubber raft down a ramp toward the big bay doors. As the team dropped their boat near the ramp’s edge, several other teams moved down the ramp with their own rafts, ready to enter the Adriatic Sea.

Just above the organized chaos, lines of Croatian soldiers stood on the flight deck, quietly waiting for their ride. No war paint, no boats.

The group of almost 400 Croats loaded into helicopters and lifted off for the beaches of the nearby Croatian island of Zirje.

As the first bilateral U.S.-Croatian amphibious exercise, dubbed “Phiblex 2000,” kicked into full swing Tuesday, U.S. and Croatian officials watched the exercise from the deck of the USS Austin. Hailed as a chance for Croatian soldiers to learn from Marines, it turned out that the 400 Marines from Camp Lejeune, N.C., also were taught a few lessons.

“We can definitely learn something from these guys,” said Cpl. Richard Sierra, a machine gun team leader from the weapons platoon, Company G, 26th Marine Expeditionary Unit. “Many of them are seasoned war veterans, and their units have a little more discipline toward their commanders. They are very serious about what they do. It’s all pretty impressive. Pretty impressive.”

Sierra was so impressed, in fact, that he tattooed “Gospodari Rata” on his arm on Monday. The saying is Croatian for “Masters of War.”

Sierra’s buddy, Cpl. Michael Watts, an assault team leader with the same company, said several Marines were interested in listening to Croatian war stories and what military life is like for them.

The two units met each other just a day before, when the Croatians boarded the USS Austin in the port city of Split.

“Most of them have seen combat in their own home towns,” Watts said. “It’s hard to imagine seeing a war in my home town, and most of them can tell you about it intimately.”

Sierra and Watts learned that more than 70 percent of the Croats had combat experience.

But that was Monday. Now it was Tuesday. It was their time to pull out their big American machinery, the fancy equipment for the raid.

After climbing aboard their twin-engine rubber boats, the Marines fired them up and bounced across the dark blue water.

As the little boats buzzed by the USS Austin, one of the Croatian soldiers looked down from the flight deck and watched in fascination. With his Soviet-style AK-47 rifle hanging off his shoulder, he raised his thumb in appreciation to the Marines.

But a moment later, the soldier smiled and searched for the right words: “But we have ...” and proudly pounded his fist over his heart.