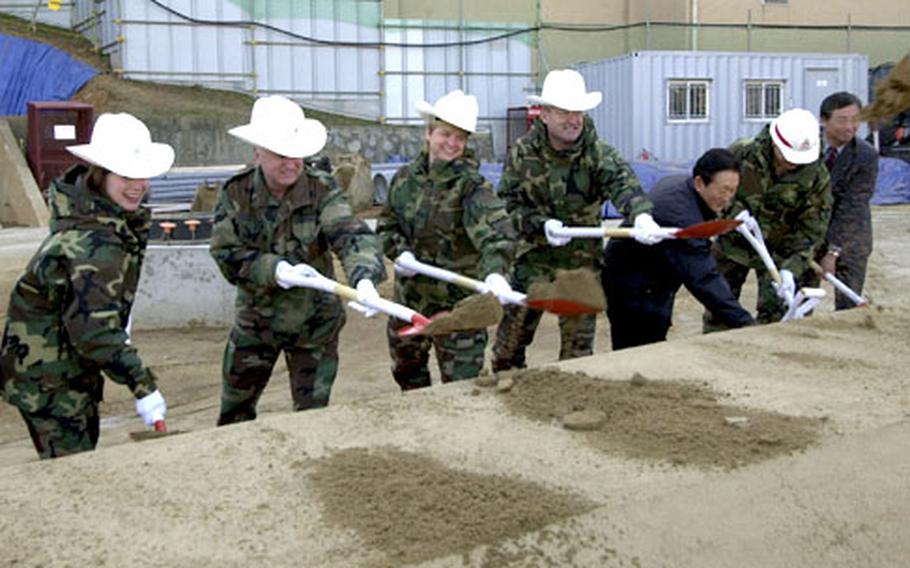 Members of the Osan Air Base community throw the first shovels of dirt during a groundbreaking ceremony for a new housing tower Tuesday morning. (T.D. Flack / S&S)

The tower will consist of 75 three-bedroom units, 30 four-bedroom units and seven units that are designed in accordance with the Americans With Disabilities Act.

Reynes told people at the ceremony that the groundbreaking was part of the continued &#8220;commitment to Team Osan to improve the quality of life for our accompanied members.&#8221;

He said the future would see a &#8220;push to increase the number of command-sponsored billets for our members &#8212; providing more stability and continuity for our mission and our people.&#8221;

Reynes told Stars and Stripes that the project is &#8220;a huge stride forward to providing quality homes for command-sponsored&#8221; airmen on the base.

Encinas, from the Corps of Engineers, said this project will &#8220;establish the standards for housing.&#8221;

He said that it was a day to turn from mission planning to mission execution and that the guys with the muddy shoes would &#8220;take dreams and plans and turn them into realities.&#8221;