Phantom Regiment off to Belgium for Battle of the Bulge anniversary George Chekan, the national president of the Veterans of the Battle of the Bulge Association, salutes as he sings the national anthem at Schumann&#39;s Corner. (Michael Abrams / S&S)

George Chekan, the national president of the Veterans of the Battle of the Bulge Association, salutes as he sings the national anthem at Schumann&#39;s Corner. (Michael Abrams / S&S) 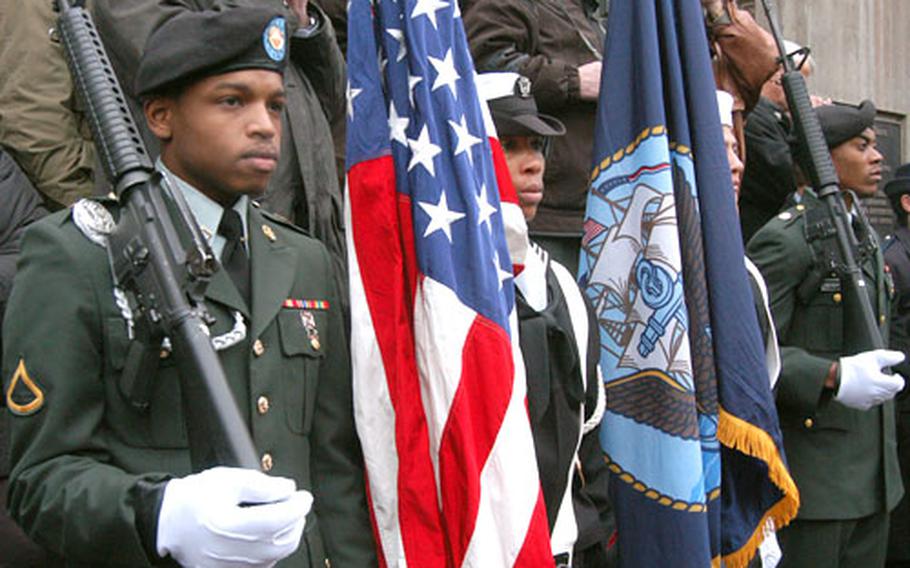 A joint honor guard of soldiers from Mannheim, Germany, and sailors from Rota, Spain, presented the colors at the ceremony at Schumann&#39;s Corner. (Michael Abrams / S&S) American Battle of the Bulge veterans, their families and guests listen to speeches at Schumann’s Corner. (Michael Abrams / S&S) Battle of the Bulge veteran Hershell Harper, who served with Company L, 104th Infantry, 26th Division during World War II, talks about the best foxhole on the front line during the Battle of the Bulge — his. (Michael Abrams / S&S) Even as members of the Phantom Regiment were headed to Belgium for the 60th anniversary of the Battle of the Bulge, ceremonies marking the World War II last-ditch effort by the Nazis were under way at Schumann&#39;s Corner, near Wiltz, Luxembourg. Here, Petty Officer 2nd Class James Raasch of the 6th Fleet Band out of Naples, Italy, plays taps. (Michael Abrams / S&S)

BAUMHOLDER, Germany &#8212; At about 11 a.m. Thursday, Command Sgt. Maj. Joseph Hall looked at the wall clock in his office.

At this moment 60 years ago, Hall mused, commanders are turning the 10th Armored Division toward Bastogne, Belgium, after a 5:30 a.m. German artillery barrage launches the Battle of the Bulge.

&#8220;Sixty years ago right now, a whole bunch of [U.S.] units are getting shellacked and trying to figure out what was going on,&#8221; said Hall, sergeant major for the 1st Armored Division&#8217;s 1st Battalion, 6th Infantry Regiment at Baumholder.

For Hall, Bastogne is far more than just a history lesson or dates on a calendar. In his mind&#8217;s eye, he can see it happening now.

When Hall is not in the Army of 2004, the historian and military memorabilia collector leads about a dozen 1st AD soldiers in the Phantom Regiment, re-creating the Army of 1944.

This weekend, the 60th anniversary of the Battle of the Bulge, should be one for the books, he said.

About 14 Phantom Regiment members are heading about 100 miles northwest to Bastogne from Baumholder for the commemoration. They&#8217;re taking an M-3 halftrack as well as an M4A1 Sherman tank &#8212; one of seven vintage tanks slated to take part in a planned 12-mile tank road trek, Hall said. That&#8217;s just one of several weekend events, including a Sunday wreath-laying and the annual walk around the perimeter of the Bastogne battlefield.

The Phantom Regiment will take its armor courtesy of Bastogne organizers, who are paying about $8,000 for transport, and the 1st Armored Division Museum at H.D. Smith Barracks, which owns it. Hall and his group store and maintain both vehicles. Hall and the Phantom Regiment &#8212; an Army-authorized, nonprofit group &#8212; have close ties to the museum, says curator Steven R. Ruhnke.

Nearly all the rest of the World War II equipment, uniforms and weapons Phantom soldiers display belong to Hall, a longtime collector. However, a new member, Spc. Carl Stahl, also with the battalion, was a re-enactor in the States and received his equipment just in time for Bastogne.

In the Battle of the Bulge, the last great German offensive of World War II, a Dec. 16 surprise attack in the Ardennes forests of Belgium and Luxembourg created a &#8220;bulge&#8221; in Allied lines. The opening German barrage wiped out much the Allied command and control, and soldiers were left to fend for themselves against the German onslaught, Hall said.

&#8220;It was all small-unit action &#8230; which is what they were taught to do. They were encircled,&#8221; he added. U.S. forces held and the Germans failed to break out and seize their objective, the port of Antwerp.

Though the 10th AD and the 101st Airborne Division are celebrated for holding off superior German forces until Allied air forces could defeat them, it was the 28th Infantry Division that, despite being overwhelmed, held long enough for reinforcements to stop the offensive, Hall said.

The two-year-old Phantom Regiment is once again hitting stride after the 1st AD&#8217;s return from Iraq last July.

Phantom Regiment soldiers already have put on historical displays, including an October demonstration titled &#8220;The Defense of Castellachio.&#8221; It re-created a four-day stand in October 1944 by a 1st AD company fighting in Italy against a battalion-size German force. On Thanksgiving Day, Hall and company took the Sherman tank to Baumholder&#8217;s post exchange parking lot and drew a steady crowd of young tankers.

A young soldier in civilian clothes eyed the Sherman, then Pfc. Edward Thrasher, a Phantom Regiment member who is all of 20 years old.

As a Phantom Regiment soldier, Thrasher is entitled to all the benefits and hard work that goes into depicting the accomplishments of the 1st AD&#8217;s fight against the Germans.