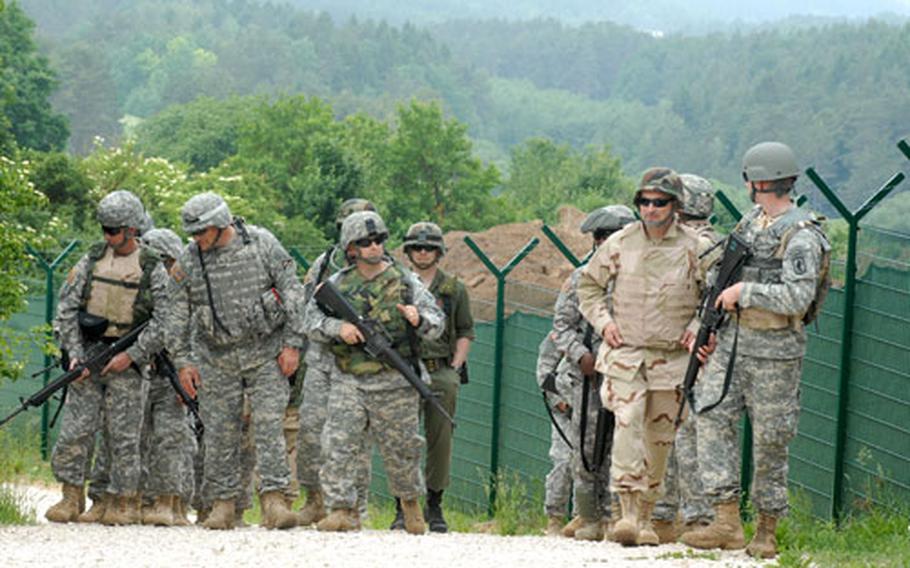 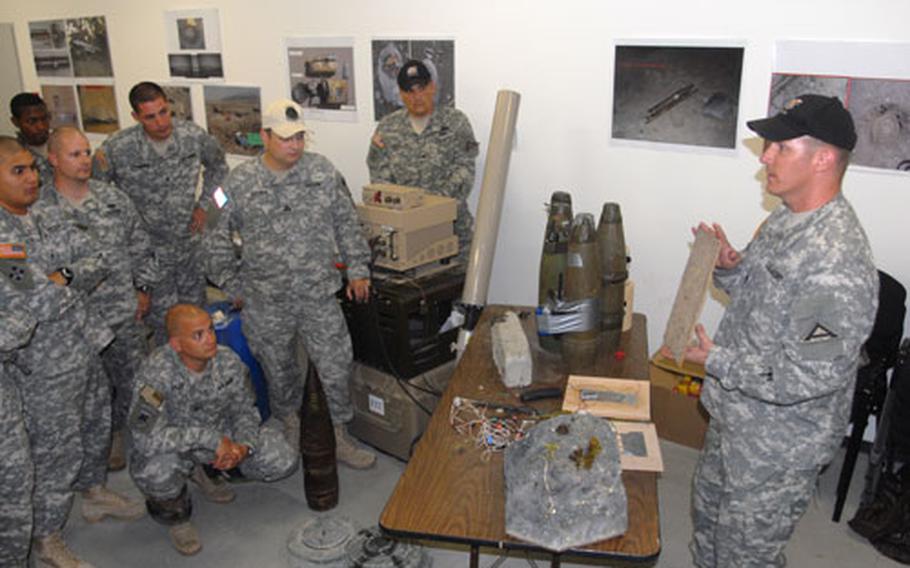 HOHENFELS, Germany &#8212; There are pressure plates made out of hacksaw blades, lumps of foam painted to look like rocks and all manner of wires, electronics and ammunition at Hohenfels&#8217; IED "petting zoo."

The improvised explosive device petting zoo is where individuals headed to Iraq or Afghanistan &#8212; usually individual replacements or personnel from rear detachments of deployed units &#8212; get hands-on experience with deadly bombs.

Staff Sgt. Robert Cornett, 38, a Joint Multinational Readiness Center trainer, talked about IEDs on Tuesday with a group of Iraq&#8211; and Afghanistan&#8211;bound personnel. He was standing in a building full of "victim-operated" IEDs that are set off by pressure plates, old cell phones and wires that might indicate an IED laboratory &#8212; a device able to jam radio signals that insurgents might use to set off an IED &#8212; artillery rounds often incorporated in the bombs and deadly explosively formed penetrators.

"They (the EFPs) are coming out of Iran," Cornett said. "They are being commercially produced. They can punch a hole in four inches of armor at 100 meters. The only way to defeat them is to see them first."

Insurgents camouflage EFPs as rocks, using foam similar to the special effects used on a Hollywood movie set. The way to spot them is to look for the hole in the rock where a sensor is placed, he said.

The petting zoo included a "Rhino," a device mounted on the front of vehicles that detonates EFPs before they can injure or kill troops. However, insurgents have countered Rhinos using a pair of bombs placed at different angles in an effort to hit their intended target, he said.

"They (insurgents) have measures to counter our countermeasures. For example, we started defeating their transmitters (with jammers), so they went back to hard-wired," he said.

After checking out the IED petting zoo, the personnel headed into the wild to observe IEDs in their natural environment, by the side of the road.

Donning full battle rattle, they marched up a road looking for signs of IEDs. It wasn&#8217;t long before somebody stepped on a pressure plate hidden beneath the gravel setting off a loud simulated blast.

One of those doing the training was Staff Sgt. Edward Rosales, a V Corps soldier, who&#8217;s headed to Afghanistan as an individual replacement.

The 34-year-old Rowland Heights, Calif., native has deployed to Iraq twice but thought things would have changed a lot since he was last there, in 2005.

"It (the counter-IED training) is a refresher for me, but every time you go down, if you don&#8217;t go down with the mindset that you have something to learn, you are setting yourself up for failure," he said.

The petting zoo was the first place Rosales had seen EFPs, he added.

Several personnel in the training were civilians whose jobs don&#8217;t normally take them outside the wire.

Robin Floyd, 48, who works for Tobyhanna Army Deport supporting the 2nd Stryker Cavalry Regiment, said he moves from base to base only in helicopters when he&#8217;s in Iraq. However, he rated the training highly and added that it might prove useful one day.

Cornett said the counter-IED classes have run every two weeks since November with class sizes ranging from 60 to 270 personnel.