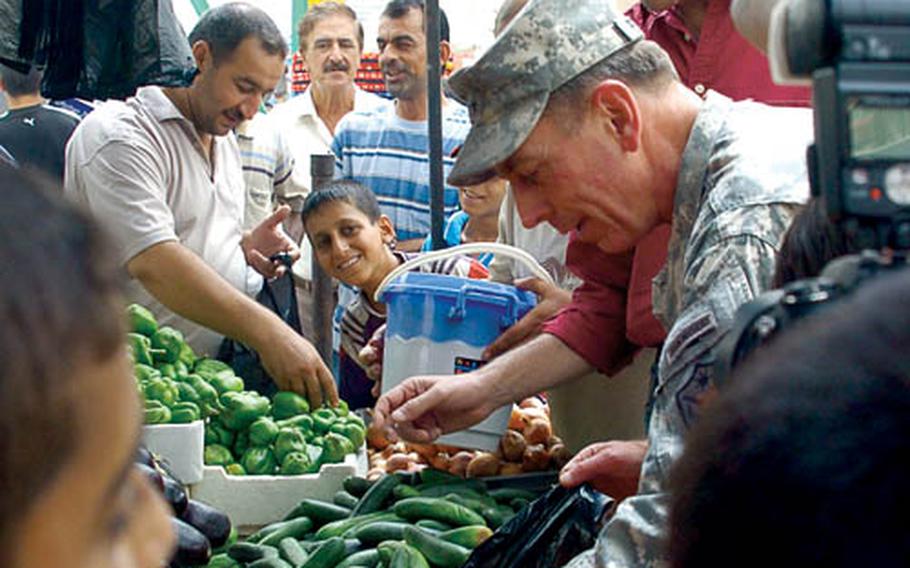 Gen. David Petraeus selects fresh vegetables during a tour of Shorja Market in eastern Baghdad on Sept. 10. Petraeus toured the market as part of his final battlefield visit before his new assignment as head of U.S. Central Command. (Grant Okubo / U.S. Army)

While he believes Iraq is still al-Qaida&#8217;s "main effort" in the region, Gen. David Petraeus&#8217; first priorities at Central Command will be the deteriorating situations in Pakistan and Afghanistan, he said in an interview Sunday afternoon in his Green Zone office.

In an hourlong session amid preparations for his change of command on Tuesday, Petraeus recounted the hard-won successes achieved in Iraq and gave a glimpse into the months to come.

And while he said the lessons learned in Iraq will help inform his decisions, he is keenly aware that flexibility is key. Different circumstances call for different strategies, something he noted the enemy knows as well.

"There may be a reassessment ongoing by al-Qaida&#8217;s senior leaders as they see the reversals al-Qaida has suffered in Iraq. And there appears to be some indicators that some resources at least have been sent to western Pakistan, and Afghanistan, rather than Iraq," Petraeus said.

"Although some of that might just be due to the problems they&#8217;ve had getting foreign fighters through Syria into Iraq &#8230; But Iraq is still a location in which al-Qaida is able to generate significant resources through Mafia-like activities that fund extremists beyond the boundaries of Iraq &#8212; the Levant and elsewhere in the region."

Petraeus noted that the actual conduct of the campaign on the ground is up to Gen. David McKiernan, the commander of NATO&#8217;s International Security Assistance Force and the U.S. Forces Afghanistan.

But one of Petraeus&#8217; first goals as CENTCOM commander is "to truly develop the kind of nuanced understanding of Afghanistan that I was able to bring when I came back [to Iraq] for a third tour. Because the biggest lesson you take from Iraq, or any case like this, is that every situation is truly unique."

While not directly addressing a question about the U.S. military&#8217;s cross-border raids targeting suspected militants in Pakistan &#8212; a move that has angered the military and political leadership there &#8212; Petraeus said everything has to be part of a broader strategy.

"It can&#8217;t just be about security. Military action is absolutely necessary &#8230; but not sufficient," he said. "You must also have political development, economic progress, diplomatic initiatives, rule of law, and so forth. And all of those are related."

On Iran, Petraeus said that a "wait-and-see" attitude has developed among leaders in Iraq. He said harmful Iranian activity in western Afghanistan "has generally been fairly low," but that it would be watched closely in the coming months as the international effort there increases.

"Afghan leaders, like Iraqi leaders, would like to have a constructive relationship with their neighbor," Petraeus said. "But, as an Iraqi leader said during [Iranian President Mahmoud] Ahmadinejad&#8217;s visit, Iraq welcomes Iranian goods and services and religious pilgrims, but not Iranian explosively formed projectiles and rockets.

The way ahead in Iraq is tied to Iran in another fashion, he said. Muqtada al-Sadr and most of the leadership of so-called "Special Groups" &#8212; the U.S. military&#8217;s term for mainly-Shiite splinter militias &#8212; remain in Iran but could return and pose a threat.

"Muqtada al-Sadr has been in Iran virtually all of the time I&#8217;ve been MNF-I commander. There are rumors he may come back again in the near term, but we&#8217;ll have to see if that&#8217;s the case," Petraeus said. "Undoubtedly, [al-Sadr] could be a catalyst for violence if he chose to do so."

And while Iran has tried to "Lebanonize" Iraq with the Mahdi Army as a version of Hezbollah, the militia says it is transforming into a social services organization instead of a fighting group.

Overall, he said, "al-Qaida is in relative disarray and the militia presence is much diminished. However, having said all of that, al-Qaida very much remains lethal and dangerous. We&#8217;ve seen that in recent days."

He ticked off a list of other challenges that could rupture the relative calm in Iraq: ever-present political tensions, upcoming provincial elections, disputes between Baghdad and Kurdish leaders over the future of Kirkuk and the integration of the "Sons of Iraq" groups into Iraqi security forces.

All of those threats were represented on a PowerPoint slide that he dubbed the "potential storm clouds slide."

He was confident a Status of Forces Agreement that removed U.S. combat forces from most cities by as early as next summer was realistic.

Petraeus also answered questions solicited by Stars and Stripes from troops in Iraq and Afghanistan. Among them was whether he foresaw any scenarios &#8212; such as a "surge" in Afghanistan &#8212; that would cause him to support another change in tour lengths.

"I&#8217;d be hard-pressed to see that, I think," he said, after a long pause. "I think everyone is keenly aware of the strain on the force, the sacrifices that we&#8217;ve asked of our troopers and their families. That awareness very much informs recommendations that we make on force requirements."

While conditions on the ground drive those decisions, he said, "there clearly has to be an awareness of the context in which those recommendations are made. The strain on the force has to be among them, and I think that&#8217;s something I&#8217;m qualified to assess, having deployed for nearly five of the last seven years. We&#8217;ve walked our share of patrols, I can tell you that much."

Still, he cautioned against declaring the U.S. effort has reached a tipping point in Iraq.