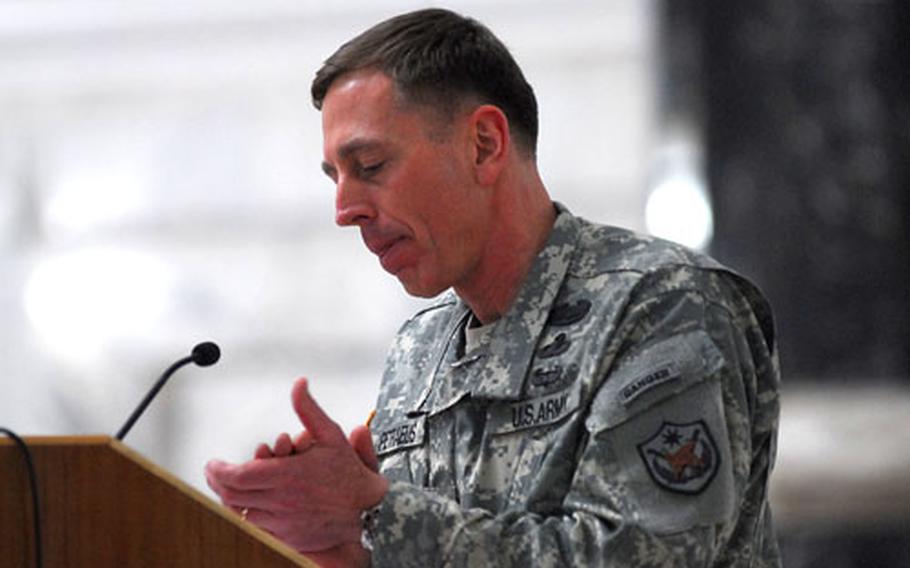 BAGHDAD &#8212; Gen. George W. Casey Jr., the embattled commander of coalition forces in Iraq, told reporters he still felt &#8220;a little numb&#8221; over his removal and replacement by Gen. David H. Petraeus Saturday, but that he was unable to cite any mistakes he had made during his 2&#189; years in command of the war effort.

&#8220;It might seem a little trite, but for me it&#8217;s still too close in time to judge mistakes, because if I thought I had made a mistake, I would have changed it,&#8221; Casey told reporters outside the moated Al Faw Palace complex at Camp Victory moments before a formal transfer of command ceremony.

Casey, 58, is stepping down amid heavy criticism from members of Congress for his handling of the Iraq war. He faced the critics during a confirmation hearing on his nomination for Army chief of staff, a nomination approved Thursday by the Senate.

Among other criticisms, he was accused of relying too heavily on Iraqi security forces to establish stability and for failing to stem the explosion of sectarian violence that began one year ago following the bombing of a revered Shiite mosque in Samarra.

Those criticisms, along with growing frustration at home over the progress of the war, led President Bush to select Petraeus, a well-regarded authority on counter-insurgency warfare and the holder of an Ivy League doctorate in history, to replace Casey.

Petraeus, who has been described by some in Congress as the coalition&#8217;s &#8220;last best hope&#8221; for change in Iraq, will oversee the addition of 21,500 U.S. troops in Iraq as well as a critical battle to restore peace to Baghdad.

In spoken remarks to an audience of hundreds of coalition and Iraqi military officers as well as dignitaries such as U.S. Ambassador to Iraq Zalmay Khalilzad, and in a written letter to coalition troops, Petraeus said a decisive moment in the war was approaching and that the stakes could not be higher.

In his letter, Patreaus wrote: &#8220;The enemies of Iraq will shrink at no act, however barbaric. They will do all that they can to shake the confidence of the people and to convince the world that [the coalition&#8217;s] effort is doomed. We must not underestimate them.&#8221;

He said too that the courage and sacrifice of coalition troops would be critical in the coming months.

&#8220;Now, more than ever, your commitment to service and your skill can make the difference between victory and defeat in a very tough mission.&#8221;

While Casey and Petraeus have differing views over the additional troops, both said Saturday that much of the war effort would depend on the ability of the Iraqis to overcome deep-seated, sectarian animosities.

Asked by reporters what his greatest fear for Iraq was, Casey responded that it would be the failure of Iraqis to &#8220;put the past behind them. We liberated them from 35 years of tyranny. But we can&#8217;t liberate them from the fears and prejudices that grew up in those 35 years. [The Iraqis] have to do that.&#8221;

The new top commander of coalition forces is a wiry New York native whose competitive spirit is embodied by his habit of challenging soldiers half his age to a contest of push-ups.

But it&#8217;s not Petraeus&#8217; feats of physical prowess that inspire hope among his fans. It&#8217;s his mental acuity. A West Point graduate, Petraeus also earned a Ph.D. in history from Princeton. The topic of his thesis was &#8220;The American Military and the Lessons of Vietnam.&#8221; He went on to eventually co-author the U.S. military&#8217;s new counterinsurgency manual.

While commanding troops in northern Iraq following the initial invasion in 2003, Petreaus quickly grasped the need to not only provide security, but also to engage local tribal and religious leaders and kick-start the area&#8217;s economy. After leading troops in Iraq&#8217;s north, Petraeus returned in 2004 to oversee the training of Iraqi security forces.

Petraeus is said to have assembled his own brain trust of &#8220;warrior-intellectuals&#8221; to advise him. The group is composed of a handful of combat-seasoned colonels &#8212; most with Ivy League doctorates &#8212; who have come to be regarded as experts in counter-insurgency warfare.

The group will help Petraeus oversee the battle for Baghdad, which, among other things, will involve placing U.S. troops alongside Iraqi police and soldiers in 30 mini-bases or Joint Security Stations throughout the city. The campaign, which began past week, will occur in phases over a period of months.

&#8220;In the end, Iraqis will decide the outcome of this struggle,&#8221; Petraeus said in his message to coalition troops Saturday. &#8220;Our task is to help them gain the time they need to save their country.

&#8220;To do that, many of us will live and fight alongside them. Together, we will face down the terrorists, insurgents and criminals who slaughter the innocent. Success will require discipline, fortitude and initiative &#8212; qualities that you have in abundance.&#8221;

NOTE: This is a message to the troops from Gen. David H. Petraeus, thenew Multi-National Force-Iraq commanding general.