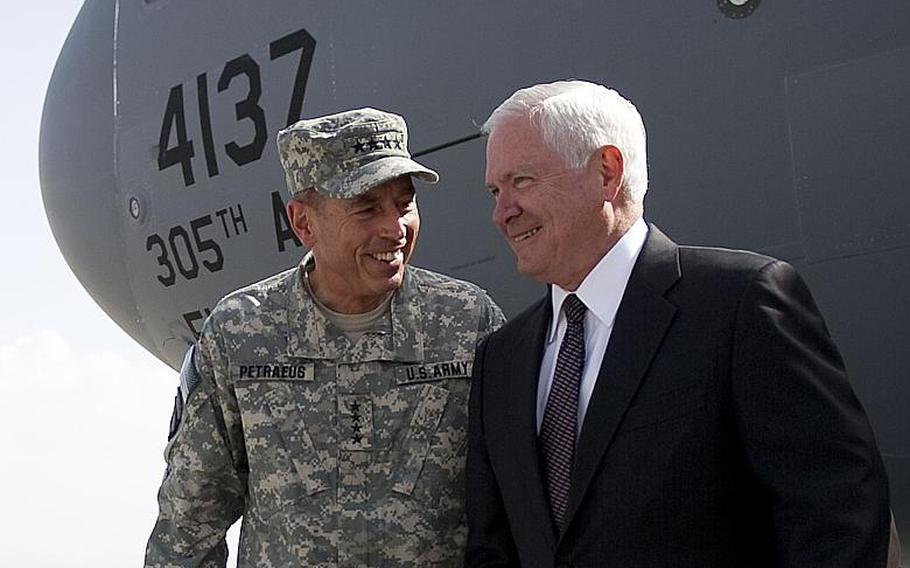 KABUL, Afghanistan &mdash; Gen. David Petraeus said U.S. offiicals are seeing signs in Afghanistan that many Taliban members, including those at the &ldquo;very senior level,&rdquo; are preparing to take up the Afghan government&rsquo;s offer of reconciliation following recent news that an official policy is forthcoming.

&ldquo;The prospect for reconciliation with senior Taliban leaders certainly looms out there, and there have been approaches at [the] very senior level that hold some promise,&rdquo; Petraeus said Thursday.

Petraeus, the Afghanistan war&rsquo;s commanding general, briefed reporters traveling with Defense Secretary Robert Gates, who arrived in the Afghan capital after a stop in Iraq on Wednesday to mark the end of combat operations there. Petraeus&rsquo; spokesman said the high-levels talks so far have been between Afghans and do not involve U.S. officials.

Word that senior Taliban leaders are considering reconciliation represents a new development, though it has long been expected that low- and mid-level Taliban fighters who lack extreme religious allegiances to the group would seek to make peace, particularly if they see better economic and security opportunities in doing so.

&ldquo;We&rsquo;ve had probably now certainly over 100 if not in the hundreds [of overtures] over the last couple of weeks, in anticipation of the reintegration policy,&rdquo; Petraeus said.

The U.S. is facilitating talks between the low-level Taliban and Afghan officials, Petraeus said last week in an Fox News interview, and in &ldquo;a couple of isolated cases&rdquo; did the negotiating.

&ldquo;Our enemies are paying a very steep price and feeling more pressure than ever,&rdquo; Gates said later Thursday at a joint press conference with Afghan President Hamid Karzai. &ldquo;This is precisely the kind of pressure we believe will lead to reconciliation and reintegration. We are beginning to see small, isolated examples of individuals and groups laying down their arms rather than confront Afghan and coalition forces.&rdquo;

Gates said he and Karzai discussed the war effort, recruiting of Afghan forces, the establishment of local forces and jointly working with the Pakistanis to stop attacks inside Afghanistan that emanate from there.

Gates said nearly all of the 30,000 troops sent under President Barack Obama&rsquo;s decree have arrived, resulting in an expected spike in U.S. casualties but also heavy blows dealt to the Taliban.

He cautioned that Obama&rsquo;s July 2011 deadline to begin transferring power to Afghan forces and withdrawing U.S. troops should not be misconstrued as an end to the war here.

&ldquo;First of all, Americans will still be here after July 2011,&rdquo; Gates said, flatly. &ldquo;The president has been very clear that that is the beginning of a process and that the pace of that process will be determined by conditions on the ground here in Afghanistan.

&ldquo;The United States is spending over $100 billion a year in Afghanistan. America&rsquo;s sons and daughters are being wounded and killed. The American people need to know that 15 years from now we are not still going to be fighting this fight.&rdquo;

Gates said he is confident that the progress being made now by International Security Assistance Forces and Afghan forces will allow the transition to occur next year.

&ldquo;We learned our lesson on turning our back on Afghanistan in 1989,&rdquo; Gates said, &ldquo;and we have no intention of doing so again.&rdquo;