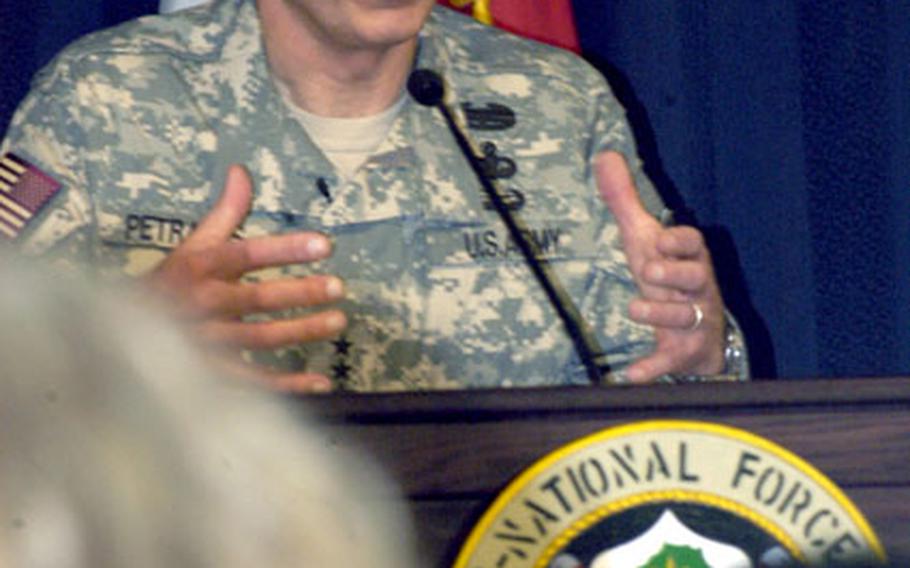 Gen. David Petraeus, who took command of Multi-National Force-Iraq in February, said that Iraqi insurgents had stepped up attacks in recent weeks and that the U.S. military would bolster forces in Diyala province to counter a regrouping of insurgents there.

While it is still too early to gauge whether the initial stages of the troop &#8220;surge&#8221; are having the desired effect of quelling violence, Petraeus said, he did note a decrease in sectarian killings over the past few weeks.

The U.S. military is bringing in more than 21,500 U.S. troops to boost the nearly 140,000 troops already fighting here. The full complement of additional troops &#8212; at least five Army brigades, two Marine Corp battalions and a Marine Expeditionary Unit &#8212; should be in place by mid-June, he said.

More U.S. and Iraqi troops are taking up &#8220;residency&#8221; in the areas they patrol, a switch from former practices in which units descended on a town or neighborhood, swept through and cleared homes, and then left.

&#8220;Soldiers now are living in neighborhoods they are patrolling, a key to counterinsurgency,&#8221; Petraeus said.

When asked what he would say to Iraqis who have lost faith in both their government and the U.S.-led coalition, Petraeus answered: &#8220;They will just have to watch and judge us by our actions. We do intend to hold, and do intend to stay.&#8221;

Coalition and Iraqi forces, too, have reinforced some of the capital&#8217;s market places &#8212; easy targets where suicide bombers often strike. Troops have erected walls around a few markets to protect shoppers on the inside, he said, and have limited vehicle traffic to the morning and evening hours, times when vendors can drop off and pick up merchandise.

In the coming months, a joint U.S. State Department and Defense Department initiative will double the Provincial Reconstruction Teams forming in Iraq from 10 to 20, Petraeus said, focusing initial efforts primarily in Baghdad and Anbar province.

Modeled after a successful program in Afghanistan, the PRTs are a mix of political, military and engineering resources teamed together to facilitate rebuilding projects.

Petraeus noted key advances recently taken by Iraq&#8217;s parliament, namely the earmarking of funds such as $7.3 billion for security measures, $10 billion for capital improvements and reconstruction efforts, and $2.4 billion to be doled out to provincial governments to spend as they see fit.

In the meantime, House Democrats are pushing legislation for the withdrawal of U.S. troops from Iraq by the fall of 2008. The tentative timetable would be accelerated &#8212; to the end of 2007 &#8212; if the Iraqi government, now under Prime Minister Nouri al-Maliki, does not meet security goals.