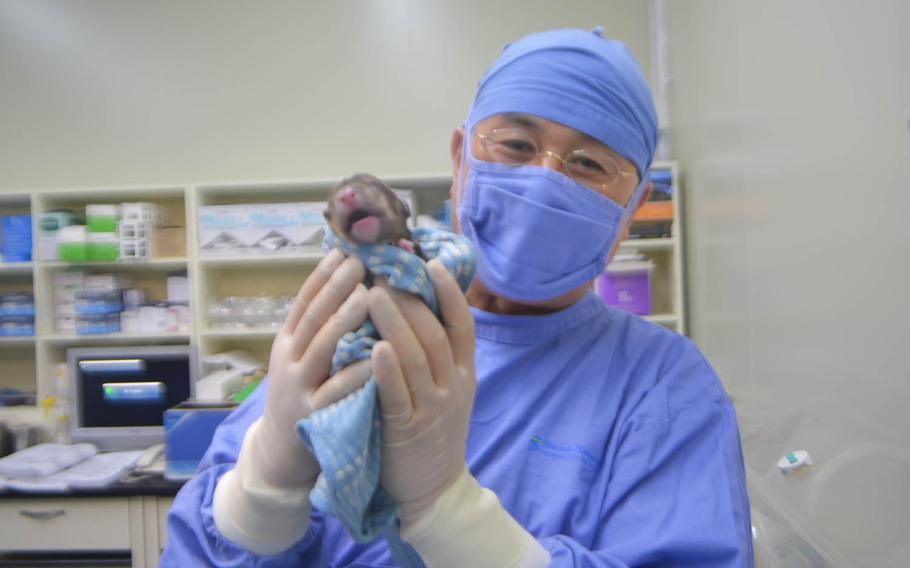 Buy Photo
Dr. Hwang Woo-suk shows off a newborn cloned puppy after performing a Caesarean section on the surrogate dog at the Sooam Biotech Research Foundation on Aug. 17, 2016. (Kim Gamel/Stars and Stripes)

Buy Photo
Dr. Hwang Woo-suk shows off a newborn cloned puppy after performing a Caesarean section on the surrogate dog at the Sooam Biotech Research Foundation on Aug. 17, 2016. (Kim Gamel/Stars and Stripes) 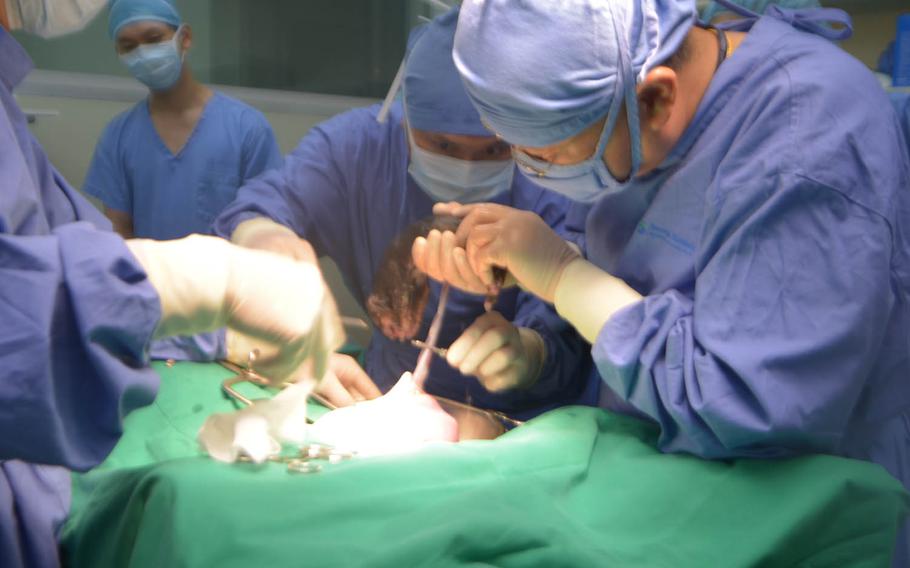 Buy Photo
Dr. Hwang Woo-suk examines a newborn cloned puppy after performing a Caesarean section on the surrogate dog at the Sooam Biotech Research Foundation in South Korea, Aug. 17, 2016. The foundation on the outskirts of Seoul clones pet dogs for $100,000 each. The puppy was the 817th to be cloned there. (Kim Gamel/Stars and Stripes) 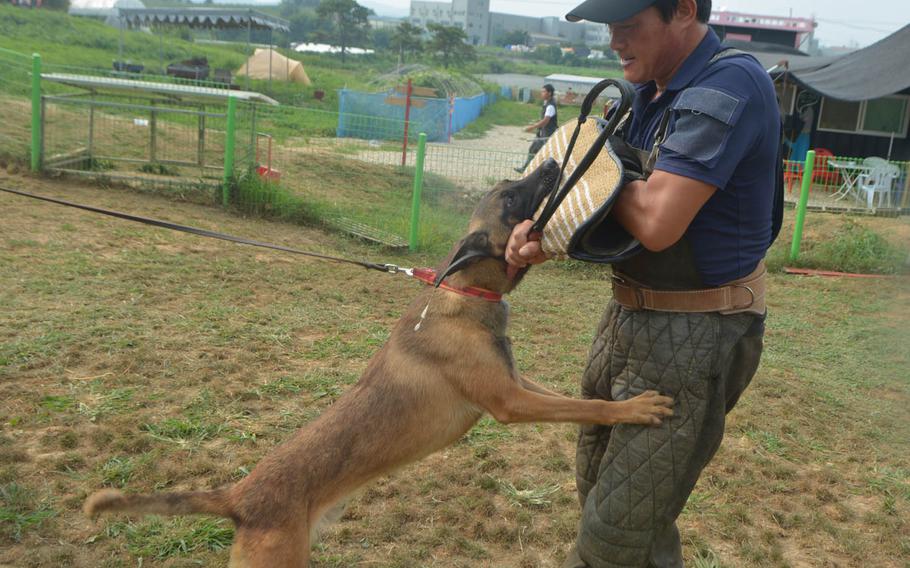 Buy Photo
Trainer Han Yun-chan works with Branco, the clone of a military dog that was deployed to Afghanistan, at a dog park south of Seoul, South Korea, Aug. 17, 2016. The training is part of a program to clone special purpose dogs at the Sooam Biotech Research Foundation. The foundation is best known for cloning pet dogs for $100,000 each. (Kim Gamel/Stars and Stripes) 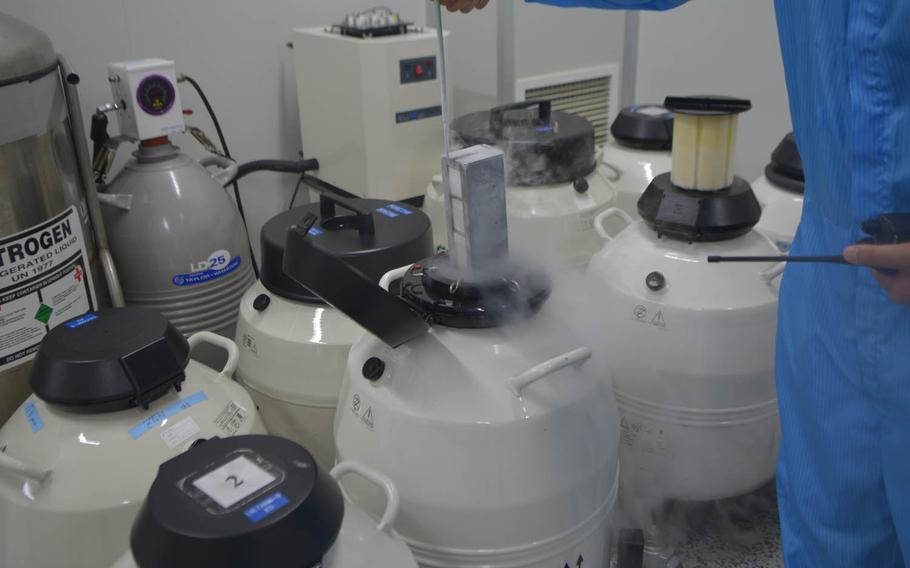 Buy Photo
A researcher displays canisters holding cells that will be used to clone dogs at the Sooam Biotech Research Foundation in South Korea, Aug. 17, 2016. The foundation on the outskirts of Seoul clones pet dogs for $100,000 each. People can also send cells to be banked for future use. (Kim Gamel/Stars and Stripes) 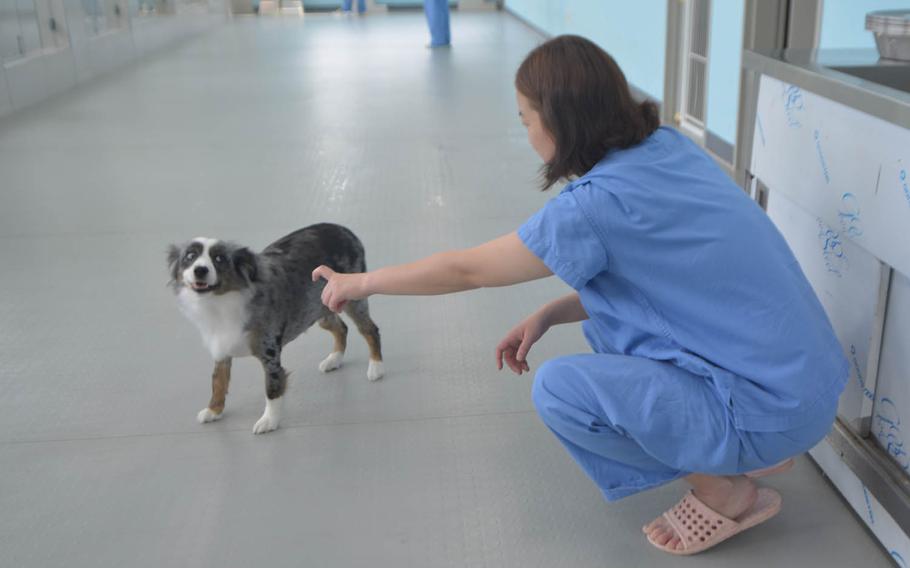 Buy Photo
Mina Kang, the head of canine care at the Sooam Biotech Research Foundation in South Korea, plays with her adopted dog Tong Tong on Aug. 17, 2016. The foundation on the outskirts of Seoul clones pet dogs for $100,000 each, but sometimes ends up with extra puppies that need homes. (Kim Gamel/Stars and Stripes) 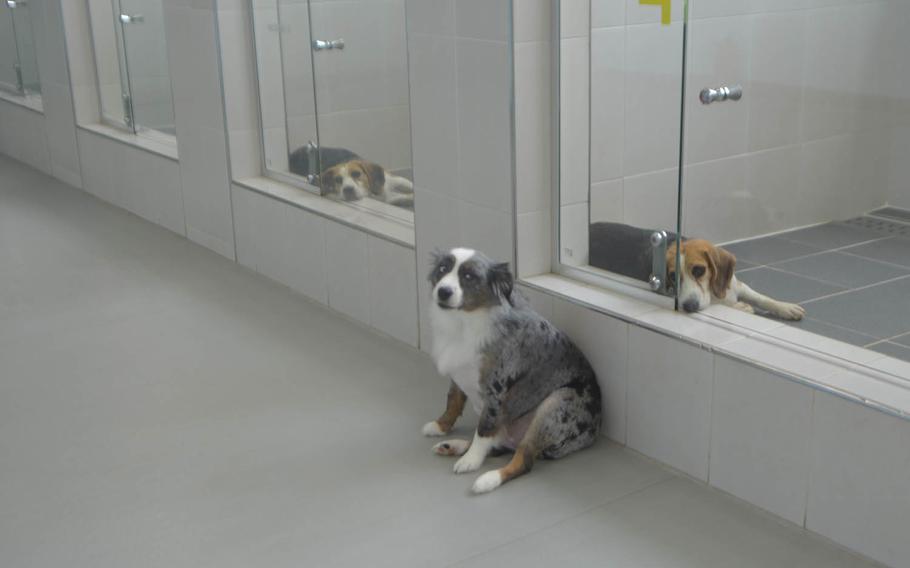 Buy Photo
Tong Tong, a dog that was cloned at the Sooam Biotech Research Foundation in South Korea, sits outside kennels housing other cloned dogs on Aug. 17, 2016. The foundation on the outskirts of Seoul clones pet dogs for $100,000 each, but sometimes ends up with extra puppies that need homes. Tong Tong was adopted by a foundation employee. (Kim Gamel/Stars and Stripes)

SEOUL, South Korea — It takes a special dog to be a military K-9, and a South Korean scientist believes he has found a way to make sure there’s always a full supply – by cloning them.

The Sooam Biotech Research Foundation has started a pilot program aimed at replicating the crème de la creme of military and police dogs.

“We’re looking for the top 1 percent,” says John Brannon, a trainer in Pennsylvania working with Sooam. “Some dogs are genetically predisposed to be superstars.”

Sooam, on the western outskirts of Seoul, is best known for cloning pet dogs for the lofty sum of $100,000 each. Clients have included the crown prince of Dubai and a British couple who took home two puppies that are a genetic copy of their boxer Dylan earlier this month.

More than 800 dogs have been cloned at the foundation, run by Dr. Hwang Woo-suk, a researcher and veterinarian who is trying to repair his reputation after being publicly disgraced for falsifying stem-cell research more than a decade ago.

The K-9 cloning would fall under the foundation’s mandate to help human welfare, and the cost would be negotiable and likely lower if the dogs are sold in bulk, a spokesman said.

The idea started with the failing health of the beloved police dog that helped find the last survivor in the rubble of the World Trade Center. Trakr’s handler won a 2008 contest to have the German Shepherd cloned, and his legacy lived on with the birth of five pups.

Sooam went on to work with partner organizations to find and clone other highly skilled canines with proven track records in working with quick-response teams to hunt criminals and uncover narcotics.

So far its biggest recipient is South Korea’s national 119 rescue service, but it also has sent three cloned dogs to a U.S. police dog training facility in Pennsylvania.

Demand is on the rise for K-9s, elite dogs that play important roles in combat, bomb detection, narcotics investigations and other operations. As a sign of respect, every military working dog is considered a rank higher than its handler. Many have been awarded medals for saving lives.

But breeding and training programs are costly and often inefficient. For example, the school that trains K-9s for the Department of Defense has found that the suitability rate runs around 50 percent, so the program tries to train about 200 dogs per year to produce 100 that are serviceable.

Sooam’s program, still in the experimental stage, aims to eliminate the guesswork.

Brannon, the president of Shallow Creek Kennels in Pennsylvania, is helping test Sooam’s program at his training facility north of Pittsburgh. He received three dogs cloned from a military dog that deployed to Afghanistan.

Brannon is still training one but says the other two are working for the Bureau of Alcohol, Tobacco, Firearms and Explosives and have lived up to their promise.

“They’ve been performing excellent. They’re exactly like the original one,” he said in a telephone interview. “I can say it absolutely does work, and we have been able to create the same dog with the same qualities.”

The special purpose dog program is one of several spin offs from Sooam’s profitable pet business. Others include transgenic research, embryonic stem-cell studies and a new skin-care line.

Sooam also is involved in an ambitious effort to restore the wooly mammoth as part of its endangered species program. In 2011, the foundation cloned eight coyotes using domestic dogs as surrogates.

The practice horrifies animal rights activists, who say it’s inhumane to inseminate the donor dogs for what is essentially a luxury item, especially when so many stray dogs need homes.

“The process involves scientific procedures that can cause pain, suffering and distress,” said the Royal Society for the Prevention of Cruelty to Animals, a British animal welfare charity. “We believe that animals are often being cloned with little consideration for ethics or animal welfare.”

Professor Jennifer Bard, an expert in bioethics at the University of Cincinnati, said she doesn’t have strong objections to cloning pets but is concerned about the use of “lab dogs” as egg donors.

“In general, I think the use of animals in medical experimentation should be limited to situations where there is significant medical need and no other viable options,” she said.

Sooam contends its dogs are no different from other lab animals and insists commercial cloning is a financially viable way to gain valuable knowledge that contributes to other important research.

“Animals have been sacrificing for us for thousands of years,” says Jae Woong Wang, a spokesman and researcher at Sooam. “If you look at it in the grand scheme [our procedures] are not that intrusive and we take every care possible to give them a comfortable life.”

The foundation covers transportation costs of the surrogates if the clients agree to take them home as well, he said.

As for the extra puppies that are born?

Sometimes the clients adopt them – at an additional cost of $15,000 to $20,000. Otherwise the foundation works to find homes for them. Most staff members have adopted one or two puppies themselves, said Wang, who added that allergies prevent him from doing so.

All the dogs are all kept in sterile glass-enclosed kennels that give them room to move around but don’t look overly comfortable with tile floors and a thin blanket. They have 24-hour supervision, and lab workers clad in blue scrubs often pet them and nuzzled their noses.

Hwang — who once had a stamp minted in his honor in Korea — did not grant a request for a separate interview. The 63-year-old scientist received a two-year suspended sentence for embezzlement and bioethics violations connected to the 2009 cloning scandal. The spokesman said his boss has been trying to lay low and repair his reputation through his work.

Cloning is done by transferring the DNA of the donor animal’s somatic cell into an egg cell that has had its own DNA-containing nucleus removed. Scientists then use an electrical current to fuse the entire somatic cell with the empty egg. The first cloned mammal was Dolly the sheep, born in 1996.

Other organizations have cloned pets, but none has had Sooam’s success. Genetic Savings & Clone, which sold cloned cats, was forced to close in 2006 because of little demand.

Hwang has fine-tuned the process to make it more efficient since he led the team of scientists that cloned the first dog in 2005 after 30,000 tries.

It took him less than 15 minutes to implant a cloned embryo into the womb of a surrogate dog last week, the noxious smell of the cauterizing tools filling the room.

He then proceeded to do a Caesarean section on another dog, pulling out puppy number 817, which looked nothing like its surrogate mother.

Tissue samples ideally are taken while the pet is alive, but cells can be extracted from a dead dog for a limited period. Just don’t freeze the cadaver, Sooam warns potential clients on its website.

The foundation also tries to manage expectations, cautioning owners that the dogs may not be exactly like their original best friends.

“It’s nature versus nurture. We can’t control the nurture part,” Wang said, adding that the foundation does vaccinations and basic training as it holds the dogs for months at a time to comply with quarantine requirements.

About a dozen special-purpose dogs are the exception. Housed at a separate kennel in a dog park south of Seoul, they’re getting special training for their future roles in public service.

Brannon, who also trains dogs for police departments around the U.S. as well as the military, said he was skeptical about cloning in the beginning but is now convinced it is more efficient than natural-breeding programs.

He’s expecting another clone next year – this one the twin of a dog that has helped agents find millions of dollars in narcotics and apprehend many suspects.

“I think it’s like cancer research or anything else,” Brannon said. “Police and military dogs save officers’ and soldiers’ lives. I don’t see any issue in recreating an animal that can save human lives.”