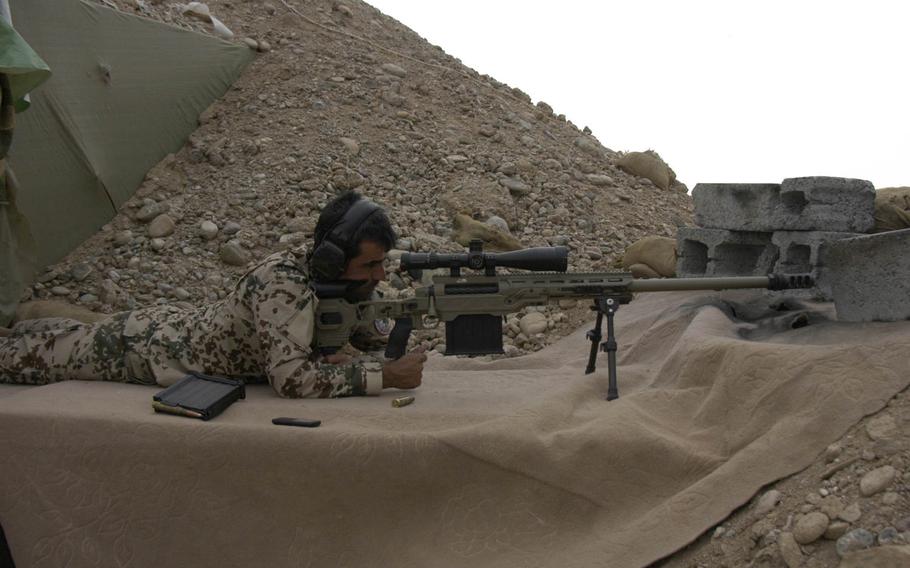 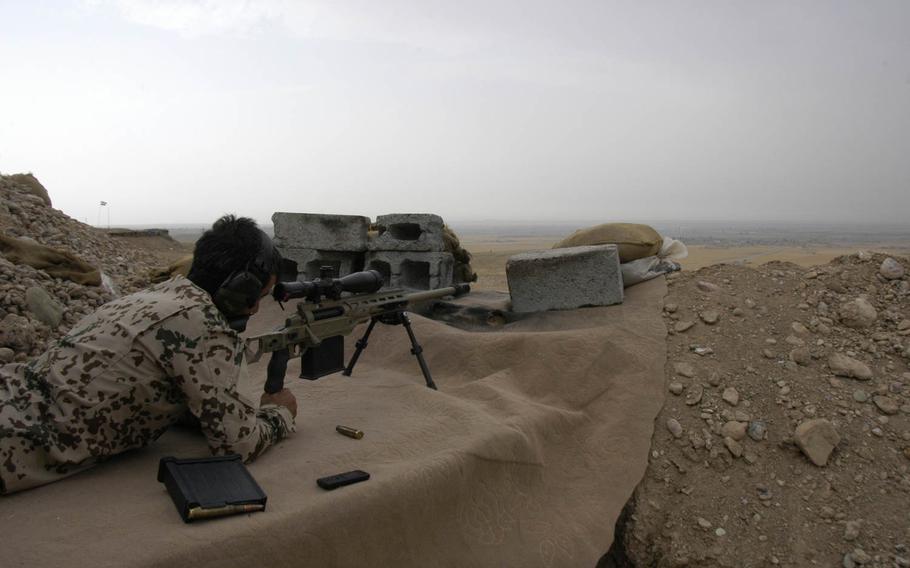 The Kurdish peshmerga have built an extensive network of fortifications overlooking Islamic State territory in northern Iraq like these seen on Wednesday, Oct. 21, 2015, about 30 miles southeast of Mosul. (Seth Robson/Stars and Stripes) 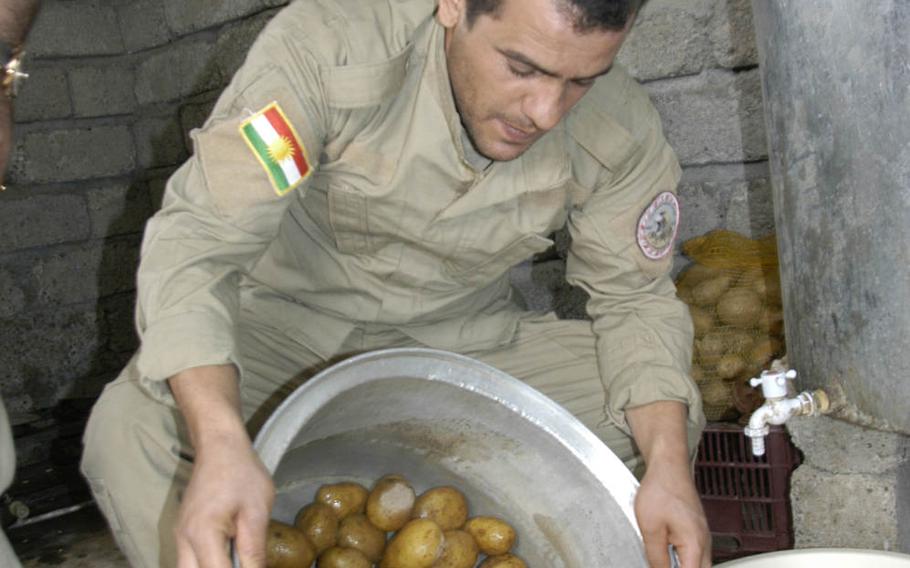 Boiled potatoes are a staple for Kurdish troops facing off against the Islamic State in northern Iraq. For lunch on Wednesday, Oct. 21, 2015, tomatoes, bread and tea were also on the menu for lunch at a front line outpost. (Seth Robson/Stars and Stripes) 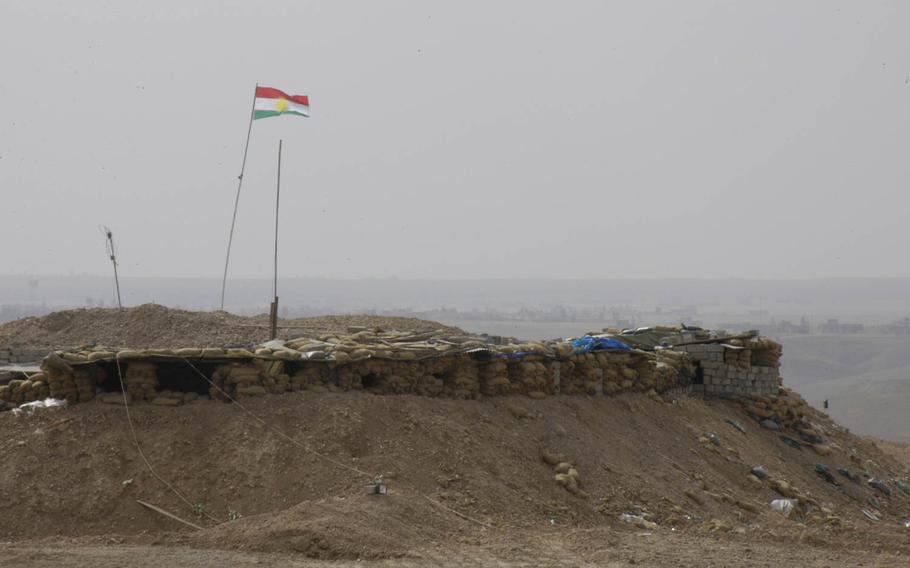 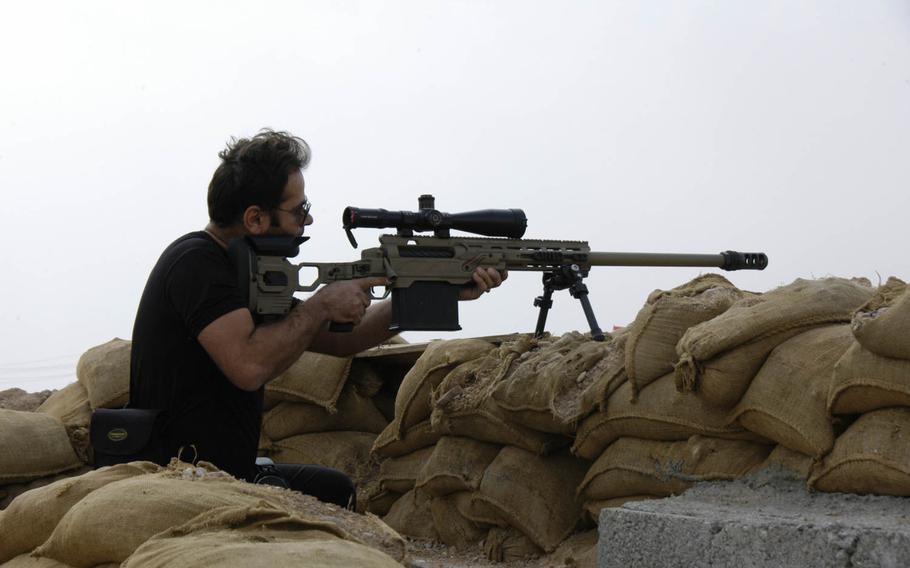 Kurdish peshmerga fighters prepare for a lunch of boiled potatoes, bread and tomatoes inside a bunker overlooking Islamic State territory in northern Iraq on Wednesday, Oct. 21, 2015. (Seth Robson/Stars and Stripes) IRBIL, Iraq — Empty villages line the road from Iraqi Kurdistan to the front lines in the province that includes Mosul, offering telling signs of the state of play in the complex fight against the Islamic State in ethnically diverse northern Iraq.

Those deserted villages were seized by the Islamic State in the summer of 2014 during a lightning strike across northern Iraq. The Islamic State blitz sent thousands of civilians fleeing their homes and drew the U.S. military back into the fight, fearing that Irbil, the capital of the pro-Western autonomous region of Kurdistan, might fall.

Backed by U.S. airstrikes, Kurdish peshmerga fighters blunted the assault and wrested many of the villages back from the Islamic State. Nearly a year later, however, few Arabs have returned — in part because, despite the Islamic State’s brutality, they fear the Kurds more than the extremists. Only Kurdish villagers remain.

The ethnic suspicions are mutual. Many Kurds don’t trust Sunni Arabs, raising questions about how Iraq can be rebuilt once the Islamic State has been defeated.

Kurdish fighters here say many Sunni Arab residents had welcomed the militants and fled with them when the peshmerga arrived. In contrast, their Kurdish neighbors, who ran away during the Islamic State occupation, have come back and often give food to hungry soldiers. None of that will be easily forgotten.

“The Kurdish people don’t trust Arabs,” peshmerga Capt. Qaom Mohammed, 49, said. “If you trust him, maybe he will kill you.”

He estimated four out of five Arabs in Nineveh province, known colloquially by its former name of Mosul, support the Islamic State.

However, an Arab Iraqi police commander maintained that some of the Arab villagers were coerced into fleeing with the Islamic State forces.

Deep-seated hatred between Kurds and Arabs, which have plagued Iraq for decades, complicates U.S. and Iraqi government strategy for defeating the Islamic State in the north.

Peshmerga fighters along the front line say they have no plans to advance deeper into the ethnically diverse province. That’s due in part because American and Iraqi government planners fear the presence of Kurdish fighters would anger Sunni Arabs whom they are trying to liberate from the Islamic State.

Iraqi authorities have insisted that military supplies to the peshmerga be coursed through the central government in Baghdad and not directly to the Kurds for fear they might use them someday to demand full independence for their Kurdistan region.

Because of ethnic sensitivities, the peshmerga role is to take and hold mostly Kurdish villages and to hold the line against any possible new Islamic State moves against their capital of Irbil, about 40 miles to the northeast.

Six months ago, this area was the scene of daily attacks by the Islamic State. The remains of rocket propelled grenades litter the no-man’s land in front of the Kurdish positions.

The Islamic State mounted large-scale attacks on the Kurdish line with suicide bombers and U.S.-made armored vehicles that they captured from the Iraqi army. The peshmerga say they stopped them with “Milanos” — European MILAN anti-tank guided missiles.

Since the front has become relatively stable, this area about a two-hour drive from Irbil has taken on an eerie resemblance to scenes from World War I. Seemingly endless dirt berms stretch along ridgelines between concrete bunkers pockmarked with bullet holes and trenches protected by sandbags and barbed wire.

Troops here spend their days scanning the streets of the town below — Sultan Abdullah — and taking pot-shots at anything that moves. On Wednesday, the Kurds peered at the Islamic State positions through binoculars and rifle scopes, occasionally firing through gaps in sandbagged walls or between concrete blocks. A jet screamed overhead, invisible behind low clouds, and explosions echoed in the distance.

A peshmerga unit, known as the “Wolves,” occupies one of the forts overlooking the town. Sultan Abdullah is an Islamic State strongpoint marked by black flags fluttering from the mosque and a tall orange and white tower.

There are no residents left in town, according to the peshmerga, who can also observe Tall Shair, Nasra and Tall Arim — three nearby Arab villages inside militant territory. They aren’t being used as a base by Islamic State fighters so they don’t come under fire, according to peshmerga 1st Lt. Mahde Shyef, 50, who has been fighting here since September of last year.

“We don’t shoot the villagers, only Daesh,” he said, using a deragatory term for the Islamic State group.

“I stay here because this is my country,” he added, staring down at the town below. “I don’t have a problem with Daesh, but Daesh has a problem with me.”

Suicide bombers have run at the Kurds only to be cut down. At night, Islamic State fighters sneak to the top of a ridge 200 yards away and take pot shots at the trenches. They’ve killed two and wounded 19 in the section of line occupied by the Wolves.

The peshmega have a few armored Humvees and pick-up trucks parked in pits gouged out of the ground to hide them from the enemy. They have night-vision goggles and long-range sniper rifles, but Islamic State militants have them too, Shyef said.

The Wolves haven’t met any American troops at the front but they see U.S. planes overhead all the time, he said.

“If we need help we call, and the American planes arrive within 10 to 15 minutes,” he said, adding that he’s called for air power about a dozen times to repel Islamic State attacks.

Sometimes the Americans call to warn the peshmerga of an impending attack. Islamic State militants also have their own surveillance operation, flying small drones over the peshmerga lines, Shyef said.

The peshmerga are typically on the line for 15 days at a time with 10 days at home, but they’ve spent as long as 40 days there during heavy fighting, he said.

The front line troops’ morale appears high. They said they are getting paid on time ($500 a month for enlisted troops) and have plenty to eat. They had boiled potatoes, tomatoes, bread and tea for lunch on Wednesday.

The soldier who prepared the food, Sgt. Mera Mohamed, 31, left a wife and three children behind to go to the front.

Mohamed said his wife is worried, but he calls her regularly. There’s cell coverage at the front, and most of the peshmerga appear to have smart phones. Some of them show videos they have taken of airstrikes and drones flying overhead.

“Six months ago, there was a lot of fighting here, but now Daesh is not strong enough to fight,” he said.

Troops are happy with U.S. support — especially from the air — which usually comes at night, he said.

“Daesh are afraid of the airstrikes,” he said. “They aren’t doing anything. Before, Daesh was very strong, and every night there was fighting. Now, there is only fighting about once a week.”