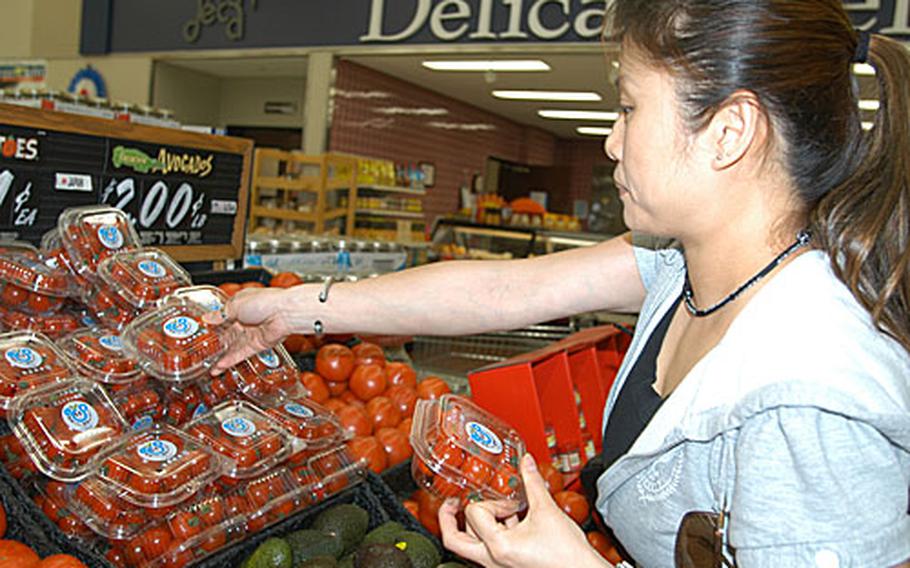 Jiyoung Wang, a Navy spouse at Misawa Air Base, Japan, shops for cherry tomatoes at Misawa’s commissary. While she said she prefers shopping for fruit and vegetables off base, where she thinks produce is fresher, she shops at the commissary for convenience. (Jennifer H. Svan / S&S)

Petty Officer 2nd Class Floyd Bussey has seen his paycheck shrink in the seven months he&#8217;s been at Misawa Air Base, Japan.

Bussey can blame some of his financial pain on COLA.

The cost-of-living allowance rates for servicemembers in Japan are some of the lowest in recent years.

Precipitating the most recent COLA drop is the dollar&#8217;s climb against the Japanese yen.

Over the past two years the dollar-to-yen exchange rate has fluctuated between a low of 109 and last week&#8217;s high of 124, according to Army Lt. Col. Loren Darmofal, U.S. Forces Japan country allowance coordinator.

COLA rates in South Korea also have been fluctuating.

The money is paid to compensate for higher costs of living overseas. The allowance, paid every two weeks, gives servicemembers equal spending power with their stateside counterparts.

So far for July, COLA rates are holding steady. In new COLA indices released Friday for the next pay period, rates across Japan didn&#8217;t budge.

&#8220;I used to enjoy going out with my wife for a nice dinner every now and then, but since the rates have dropped, we don&#8217;t get to do that as much any more,&#8221; said Senior Airman Dexter Roberts of the 374th Communications Squadron at Yokota Air Base.

For Senior Airman Tyler Max, sagging COLA rates are a double-edged sword. He&#8217;s been at Misawa since December 2004.

As a military pay technician with the 35th Comptroller Squadron, Max also fields questions and concerns about COLA &#8212; more so when the rates are low.

He hears more from higher-ranking enlisted personnel and company-grade officers, who tend to see greater COLA fluctuations in their paychecks.

COLA especially comes in handy in the winter, when the couple&#8217;s utilities allowance doesn&#8217;t always cover the high cost to heat their home.

&#8220;I fall back on COLA to cover some of those things, which takes away from my purchasing power when it comes to food, things like that,&#8221; Michael Harbin said.

Darmofal said he understands that no one likes to see less money in their paycheck, but the system is designed to be fair.

The Per Diem, Travel and Transportation Allowance Committee, which sets allowances for the Department of Defense, reviews the exchange rate daily, adjusting the COLA index based on currency fluctuations up to twice a month, Darmosal said.

Though it&#8217;s true members who shop on-post benefit less from a weaker yen, Darmosal said COLA &#8220;is not going to fully compensate every servicemember. It&#8217;s impossible to do. Some people buy a lot more things off post.&#8221;

In South Korea, COLA over the last year has &#8220;been up and down because of the won and dollar valuations,&#8221; said Maj. Jerome Pionk, an 8th Army spokesman.

Present rates are close to what they were a year ago, he said.

However, surveys on goods and services done this spring indicate prices for products are rising, he said. Whether that affects COLA remains to be seen, he added.

In a December 2006 command message, U.S. Forces Korea commander Gen. B.B. Bell said any adjustment to COLA rates from the spring retail price schedule survey should be announced in June, with an effective date of August 2007.

He noted that USFK will not conduct a shopping pattern survey this year because of the high participation rates and quality of results from the 2004 through 2006 surveys.

Transportation to the States isn&#8217;t factored into COLA, even though personnel at more remote bases have to pay more to get home.

Allison Batdorff and Bryce Dubee contributed to this story.

The Per Diem, Travel and Transportation Allowance Committee uses a computer-driven algorithm to ensure servicemembers aren&#8217;t getting underpaid or overpaid as the exchange rate fluctuates.

The system compares the rate offered at military banks to a rate set for the allowance, accumulating the differences between the two. When the difference reaches 5 percent, the per diem committee makes a change to the COLA rate, according to Army Lt. Col. Loren Darmofal, U.S. Forces Japan country allowance coordinator.

Over- or underpayments should be corrected within an eight-week period, officials have said.

Other variables that go into calculating COLA are surveys establishing local consumer prices and buying patterns of servicemembers at each base.

The Pentagon tracks prices for goods overseas annually through a retail price schedule survey. In the spring, U.S. military installations in Japan measure prices for 120 goods and services on-base and off-base.

Volunteers from base go out into the community and check prices on items as well as services such as laundry, haircuts and car care. The price of gasoline also is included. The numbers are submitted to U.S. Forces Japan and then turned into the per diem committee, which compares them with U.S. prices and sets the COLA index.

An online Living Pattern Survey conducted every three years analyzes what percentage of personnel shop off base, where they shop, and the products they buy, according to Darmofal.

Results from the shopping survey determine which stores base officials use to track prices for the retail price survey. Officials say it&#8217;s hard to skew the results. Even if someone fibs and says they do all their shopping off base in hopes of getting more COLA, it&#8217;s the spending behavior of the majority that&#8217;s most important, said one base finance official.

The next Living Pattern Survey for Japan is set for 2008.

Participation in the survey is generally high, Darmofal said, especially during periods when COLA is low.

For the 2005 survey, for example, Yokota Air Base had 1,500 responses and more than 3,000 responses came from Okinawa. Officials at Misawa say about 70 percent of personnel filled out the survey two years ago.

Spending habits typically don&#8217;t change as frequently as retail prices, Darmofal said, explaining why the survey is every three years. A base, however, can ask USFJ to conduct an out-of-cycle Living Pattern Survey if, for instance, there&#8217;s a large influx of servicemembers to the base or the town outside the gate grows significantly.

But most families there live on base and tend to purchase American products, he said. Those shopping habits could be one reason why Iwakuni currently has one of the lowest COLA indexes in Japan, just two points higher than Misawa and Yokota.

COLA rates vary even among bases on the Kanto Plain, a fact that some servicemembers don&#8217;t quite get. &#8220;I think the difference in COLA rates between the bases here is a little unfair,&#8221; said Staff Sgt. Celeste Spears of the 374th Medical Group at Yokota Air Base. &#8220;Why should ours be any different from the other nearby bases?&#8221;