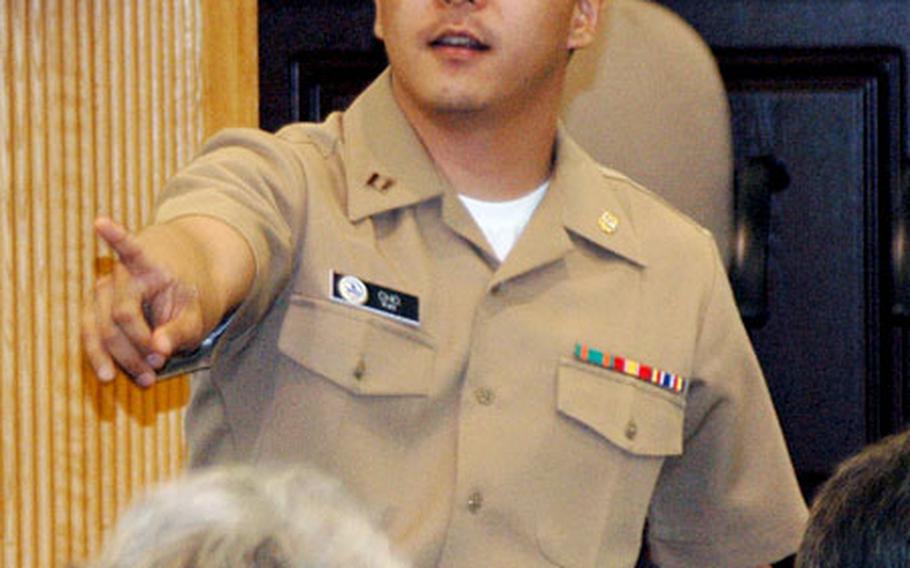 SASEBO NAVAL BASE, Japan &#8212; The personnel and pay duties now handled on ships for sailors on sea duty soon will be handled ashore under the Pay And Personnel Ashore program, or PAPA, a Personnel Services Department official said Tuesday night at a town hall meeting here.

At the first such meeting since base skipper Capt. Tilghman D. Payne took command in late April, department managers gave updates on base services and regulations.

Senior Chief Petty Officer Cesar Suriben, a PSD official, outlined plans for the PAPA program and said the facility should be built by Dec. 1, with personnel and pay functions for the crews of the USS Essex and USS Juneau shifting to shore personnel in April 2006.

All ships will transfer to PAPA by the end of 2006, Suriben told about 60 people at the meeting.

Other topics discussed at the meeting included:

&#182; Poluhowich said the final phase of Showboat Theater renovations has begun, including a snack bar expansion and addition of a ticket window accessible from outside. Work is to be complete in October.

&#182; Housing manager Gail Benton said site preparations are beginning on construction projects that would add about 300 housing units on base by the end of 2010. A housing assessment team will conduct detailed inspections of 27 housing units Aug. 1-5 to determine future housing budget needs, she added.

Navarro also said about 200 cars, motorcycles and bicycles have been abandoned on base. Some are in good condition, he said, and an auction is being considered.

&#182; The Navy Branch Health Clinic will undergo a complete turnover in health-care providers during the next three months, according to clinic director Lt. Cmdr. Patrice Robinson.

&#182; Lt. Albert Cho, an attorney from the Navy Legal Services Office, asked those attending to encourage personnel to have a current will, living will and powers of attorney on hand in case of an emergency.

A similar town-hall meeting was planned for Hario Housing Village residents at 7 p.m. Thursday in the Hario Chapel.