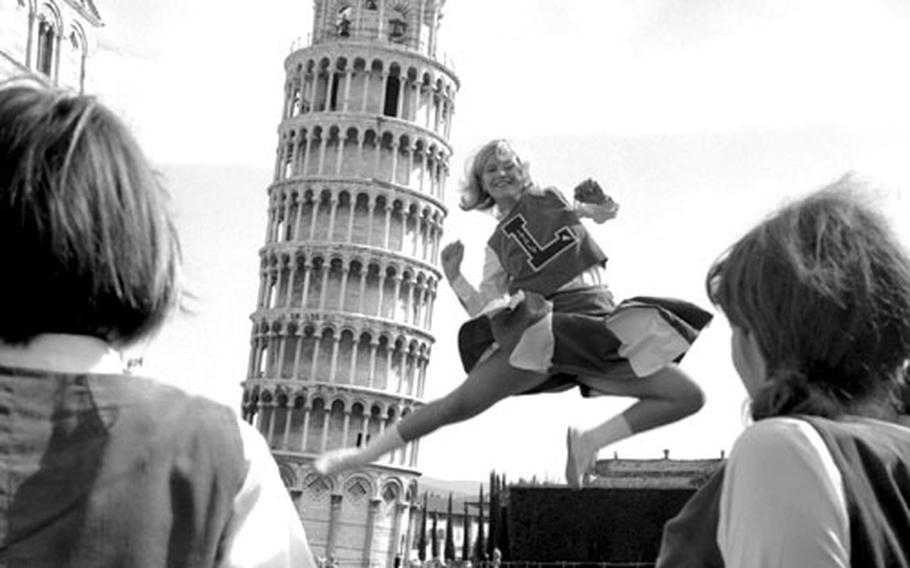 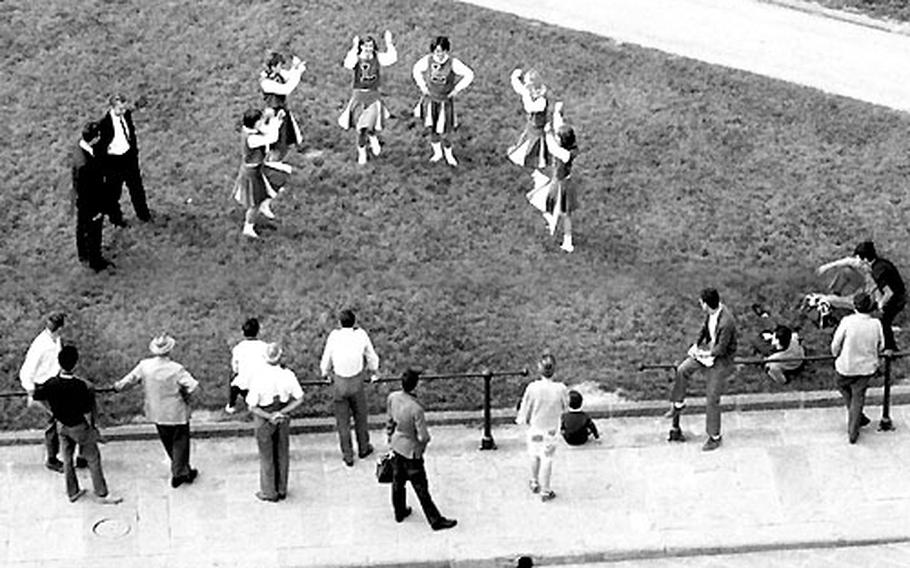 Locals and tourists take in the unusual sight of American cheerleaders at the Leaning Tower of Pisa. (Lloyd Borguss/Stars and Stripes) Leghorn High cheerleaders walk up the steps of the tower. (Lloyd Borguss/Stars and Stripes) From their off-kilter viewpoint, the cheerleaders loom out at Pisa. (Lloyd Borguss/Stars and Stripes) 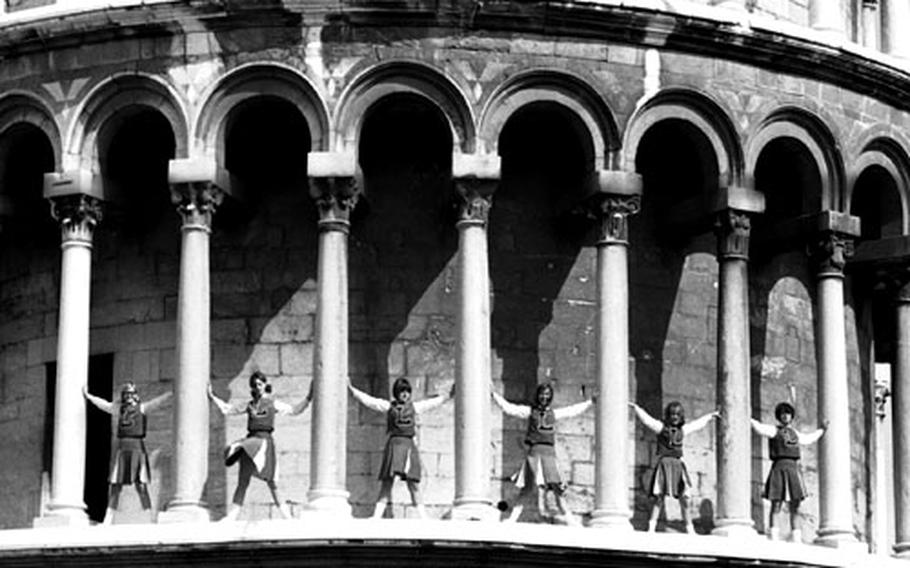 Just about everything has been suggested or tried to stop any further tilting by the Tower of Pisa.

But nothing seems to work, and the 180-foot marble marvel continues its decline, which, engineers say, will lead to its fall in another 100 years. Annually we are told of the foundation sinking, despite concrete reinforcement, another 25th of an inch in the soggy, shifting subsoil of this former swampland.

The news that the slant of the 700-year-old structure had reached more than 14 feet from the perpendicular so alarmed a group of girls at the nearby American High School at Camp Darby, Leghorn, that they decided to do something drastic to dramatize the staggering situation.

Thus it was that one sunny Saturday morning, an offday in the football schedule, the Leghorn Lions' cheerleaders staged a Pisa pep rally .

In all the glory of their green-and-white school colors, the girls led tourists and townspeople in rousing cheers of "hold that lean!"

The acrobatic and vociferous sextette danced and pranced in the square — and in the galleries of the eight-story tower.

Italians gaped. Traffic came to a standstill. Motor scooters and Fiats were abandoned as the girls leaped higher and higher and yelled louder and louder. Each vigorous routine drew rounds of applause from the amused and bemused spectators.

American tourists ground away with their cameras, recording the best novelty number of their whole trip. At first they couldn't believe their eyes and ears,. Cheerleaders in Pisa? Or was it Pisa? It must be. What else has a teetering 15,000-ton tower that sways in the wind and attracts more than 150,000 visitors annually?

For the girls, led by captain Stephanie (Muffin) Hoare, it was an exhilarating experience. Joining her in the merry maneuvers were Betsy Billington, Patty Butler, Lynn Iannacio, and sisters Cathy and Marny Rawson.

As members of the scenic set, they're used to the admiring stares and compliments of Italian men, many of whom were in their Pisa audience. ("The young ones follow you, whistle, sing, and call out `Hey Babee'; the older ones get close and breathe down your neck, pat, pinch, and grab.")

Despite being so many miles from their homes in the States, the girls keep up with American pop music over such stations as the Armed Forces Southern European Network, Radio Monte Carlo, and Radio Luxembourg. Their favorite foods are a mixture of American and Italian, with lasagna, pizza and Italian ice cream ("especially great") as leading taste treats.

The girls are enjoying life abroad while it lasts before their fathers rotate or before beginning Stateside college studies at such widely scattered schools as Smith and Washington State.

The Rawson sisters come from Bethesda, Md., and they are the daughters of Navy Capt. and Mrs. Arthur F. Rawson, Jr. He's the Military Sea Transport Service representative for the Mediterranean area. Marny's 17 and a senior; Cathy, 15, and a sophomore. They're credited with being able to cheer the loudest.

Best at cartwheels, the girls agree, is Lynn, 17-year-old junior and daughter of Mr. and Mrs. Tony Iannacio. He's district manager for The Stars and Stripes and is from Waterbury, Conn.

Betsy, 16, and a junior, is said to be able to leap the highest, maybe because her father, M. Sgt. John Billington, is with the Air Force.

A second senior is 17-yearold Patty Butler, who spent her sophomore year at Santa Monica High School in California. She has also lived in France, Morocco, and Turkey. Her father, William Butler, is a civilian with the Air Force engineers assigned to C a m p Darby.

Stephanie's father, Bert Hoare, is also a civilian and an engineer at Camp Darby, but with the Army. She's 16, a junior, and from Walla Walla, Wash.